The Missus and I relocated to the Carolina coast earlier this year, and are now happily perched next to a tidal creek and its wondrous array of wetlands avifauna. When we moved, two desires (read: edicts) were that the living area of our new house have excellent music and movie sound but not be awash in speakers. This is something I clearly understand. Few artifacts of modern living disrupt domestic feng shui more than arrays of surround-sound speakers, and man, there can be a host of them -- 11.2 channels, anyone?

We settled for a Samsung 630D video monitor and a PSB Imagine W3 soundbar in the great room, complemented by two PSB W4 in-ceiling surround speakers, and no subwoofer -- a modest 5.0-channel system with minimal impact on the visuals. TV is great; movies are good, though I’m still trying to figure out how to add a sub; and music is outstanding. So, yes, even we of the Exalted Brethren of Audio Writers can find a soundbar an acceptable solution to modern design challenges.

What a typical soundbar is

Because the speakers built into TVs and flatscreens are 1) generally cheesy, 2) by necessity positioned at the bottom or rear of the monitor and firing down, and 3) criminally underpowered, they’re pretty much useless for conveying the potentially rich audio that comes with broadcast, cable/satellite, or streaming programs. I can’t recall a recent major sporting event that hasn’t been broadcast in 5.1 surround.

So the typical soundbar (there are atypical soundbars -- more on that below) arrays three drivers or sets of drivers, each dedicated to a discrete sound channel (left, center, right), and all in a single enclosure. That enclosure is horizontally oriented -- it’s wide, but of minimal height and depth. The horizontal orientation is necessary to spread the three channels as far across the front of the soundfield as possible. Soundbars are now being engineered to span the width of modern video flatscreens. 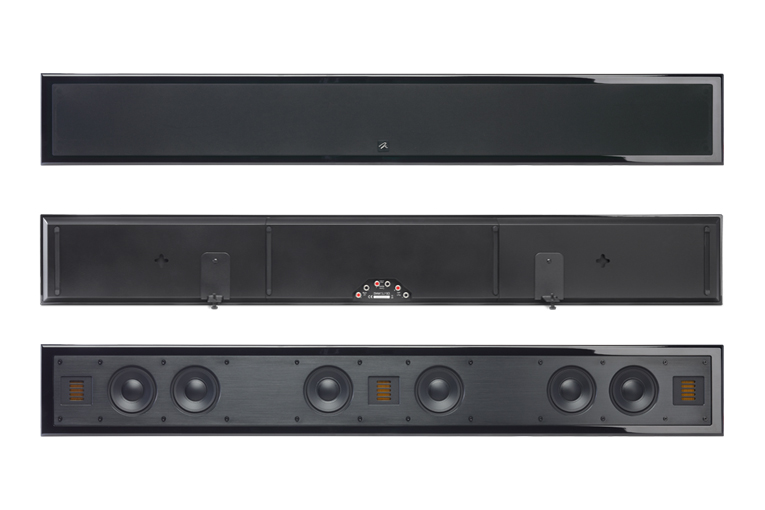 The typical soundbar has three speaker connections on its rear panel, one each for the left, center, and right channels. Almost all soundbars can be mounted on a wall, as is the Imagine W3 in our great room -- or set atop a table or stand, as the MartinLogan Motion SLM X3 was for this review. There’s no magical positioning algorithm, no fretting about whether or not to get speaker stands; it’s pretty much no muss, no fuss. Connect it, tune it, and you’re done.

What the Motion SLM X3 Is

MartinLogan is no stranger to soundbars. They currently make three models of typical soundbars, and now, with their Motion SLM (=slim) models, they’ve joined the phalanx of au courant manufacturers who are competing to make wide soundbars as thin as the video flatscreens they’re designed to complement -- or, at least, as thin as they can be and still do the job. The Motion SLM X3 ($999.95 USD) weighs all of 13 pounds and measures 48”W x 3.9”H x 2”D. That’s two whole inches deep. For those of you accustomed to acceptable sound being generated by cabinets of considerably greater depth, the SLM X3 presents a few intellectual challenges -- never mind how MartinLogan gets such great sound out of such a slim enclosure. 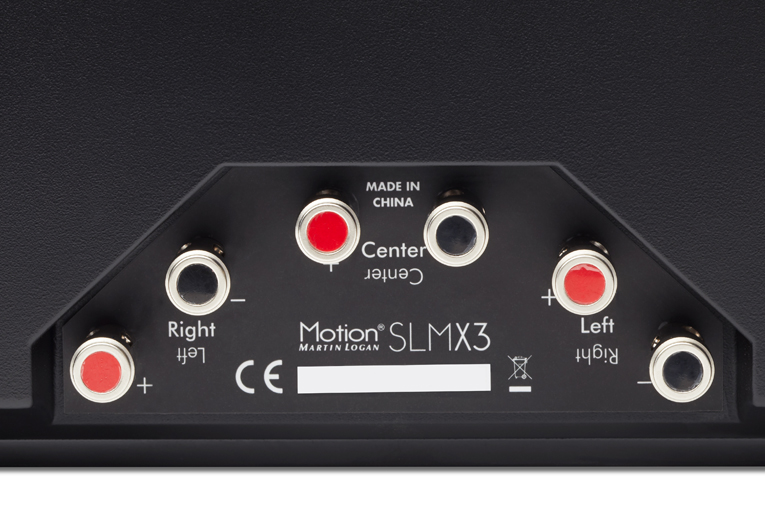 The cabinet is made of high-impact plastic, with a baffle of anodized, brushed aluminum on which the speakers are mounted. Each of the three front channels is supported by two 4” paper-cone woofers and one of MartinLogan’s nifty Folded Motion tweeters, over which I’ve gushed before. The left channel is like a conventional bookshelf speaker laid on its side, tweeter-woofer-woofer with the tweeter farthest to the left; the right channel is its mirror image. The center channel is a D’Appolito-type array laid on its side: woofer-tweeter-woofer. A magnetically attached cloth grille covers drivers and baffle. The rear panel is simple: two push-style binding posts per channel. Because the objective is thin, thinner, thinnest, the posts don’t accept such audiophile esoterica as banana plugs; you make do with pins or tinned/bare wire.

The Motion SLM X3’s frequency response is 120Hz-25kHz (+/-3dB), making even midbass a marginal endeavor. MartinLogan suggests, strongly perhaps, that it be augmented with a subwoofer, which seems reasonable if you’re intent on a full-range response for home theater and/or music. To that end, the low end was held up by a Polk Audio DSW Pro 550 subwoofer. I positioned the SLM X3 on a custom-built A/V table below a Vizio D48-D0 monitor. An Oppo UDP-203 BD player was connected to an Onkyo TX-RZ610 receiver, as were a pair of Mirage Omnisat Micros used as surround speakers. 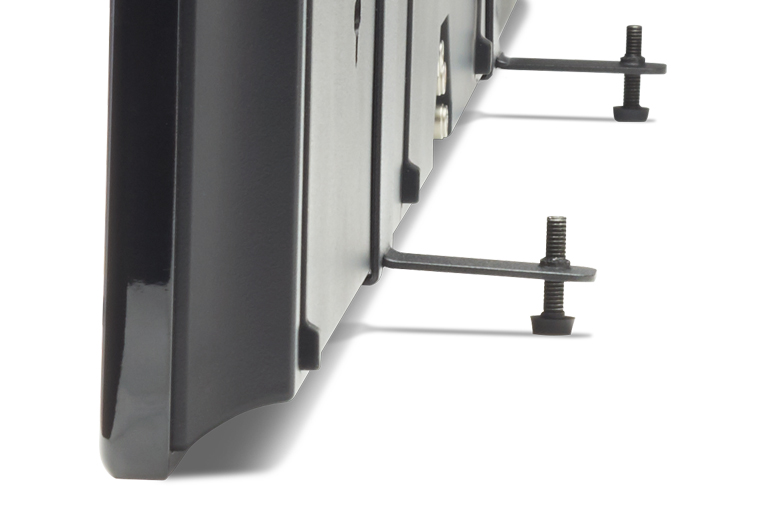 The SLM X3’s specified nominal impedance is 4 ohms, “Compatible with 4, 6 or 8 ohm rated amplifiers,” so you should make sure your receiver can deliver that extra skosh of power when it’s needed. My Onkyo has no spec for 4 ohms but is rated to output 100Wpc into 8 ohms. It seemed more than a match for the task.

I’m a Star Wars geek. Like the original film, Episode IV -- A New Hope (1977), which I drank in in massive, unmitigated gulps, the immediate sequel to the original trilogy, Episode VII -- The Force Awakens (2015), is a tour de force of buccaneering glee that again trades in the timeworn sci-fi formula: a small band of plucky good guys battles an evil host bent on galactic domination. With the three main stars of the original -- Harrison Ford, Carrie Fisher, Mark Hamill -- reprising their original roles, TFA could easily have devolved into a maudlin salute to their legacy. But director J.J. Abrams infused the franchise with new heroes (played by Daisy Ridley, John Boyega, Oscar Isaac) and villains (Adam Driver, Gwendoline Christie, Domhnall Gleeson) and deftly managed a hand-off to the next generation. Amid the planet-hopping adventures, Abrams coaxed from his cast rich, emotionally nuanced performances, especially from Ridley and Driver, adding a dimension to the franchise that had bargained its considerable cachet into stock adventure characters. I mean, who can forget Harrison Ford’s completely unconvincing “May the Force be with you?”

Have no fear, stout hearts. This is an action flick, after all, in which no buckle goes unswashed, and it’s in the action sequences that the Motion SLM X3 strutted its stuff. As Poe Dameron (Isaac) and Finn (Boyega) escape Kylo Ren’s (Driver) command ship, the stolen TIE fighter demolishes the flight bay and zips in and around the ship, drawing and giving fire in a ballet of mechanical precision whose attendant foley the SLM X3 captured flawlessly. The sounds of fighter and cannon fire raced across screen and SLM X3 with equal precision. When the fighter crash-lands on Jakku, it’s soon swallowed by the quicksand of the Northern Badlands. Then, as if the sinking weren’t enough, the fighter explodes underground, raining sand and rock everywhere. The vagrant tinks of the last pebbles were clear and unambiguous as reproduced by the SLM X3. 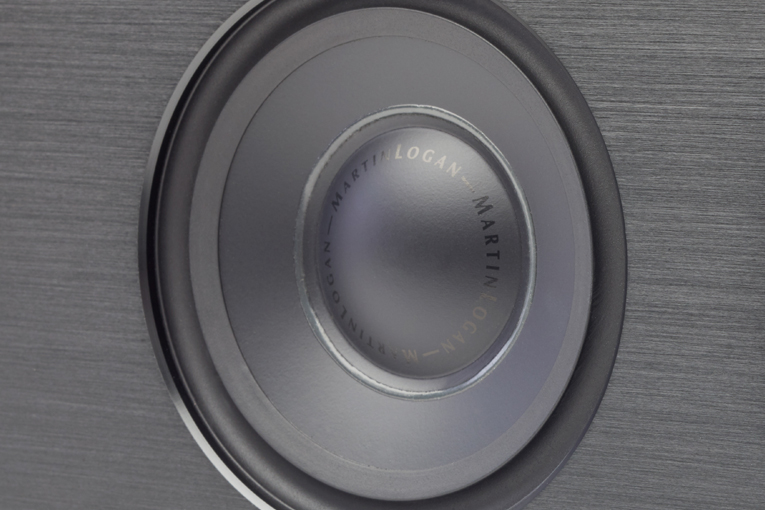 All the while, John Williams’s impeccable score flourishes in the background, spread equally among soundbar and surrounds. While prominent, it’s not intrusive, although -- and this may simply be how the BD is engineered -- I felt at times that it was too reticent, pushed a bit too far to the rear.

The Motion SLM X3 excelled with this type of film, but it’s not the sort of soundstage you’d expect if you’re used to separate speakers widely spaced around the video monitor. The soundstage was, well . . . smaller, which I suggest is a functional artifact of soundbars. You simply can’t duplicate the sort of acoustic space possible with three separate speakers from a single enclosure, no matter how well the latter is engineered or how excellent its drivers, even ML’s Folded Motion tweeters. However, even a soundbar system with a couple of good surround speakers can render an authentic, enjoyable home-theater experience, especially in a small space. My experience of the SLM X3, when partnered with the Mirage Omnisat Micro surrounds and Polk DSW Pro 550 subwoofer, was that it sounded excellent.

The budget-conscious shopper will of course want something that sounds as good with music as with movies. And here I had to discard two treasured audiophile values, soundstaging and transparency, that are simply not possible when all three front channels are squeezed into four linear feet. With that in mind, I put on the Rolling Stones’ superb Blue & Lonesome (CD, Interscope/Polydor B0025916-2), a confirmation of how clean living can sustain a bunch of seventysomethings over a 50-year career. Recorded live in a studio in a single week, the album is a testament to the Chicago blues singers, and their songs, who were the band’s earliest inspirations: Little Walter, Howlin’ Wolf, Lightnin’ Slim, Magic Sam, Otis Rush, Jimmy Reed. And while the Stones sound older, they also sound more emotionally vested in the music, and, well, heavier. 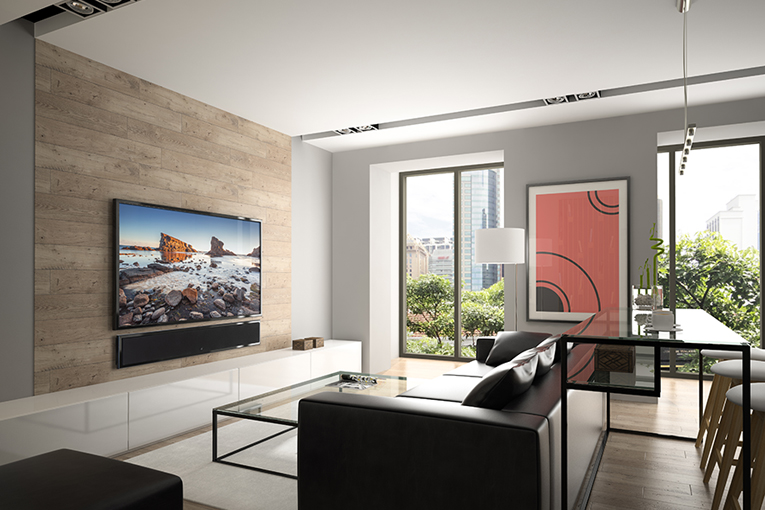 This remarkable tour de force lost none of its weight or gravitas through the Motion SLM X3. Keith Richards’s and Ron Wood’s guitars alternately chimed and crunched convincingly. Jagger’s voiced jumped out of the speaker with stunning clarity. In fact, in some instances I enjoyed the SLM X3’s “small space” presentation over a big-rig conventional stereo, because it reminded me of the early Stones records that I reveled in on AM radio and the mono hi-fis of my youth -- about all we had in 1964, when the Stones debuted. Which is not to say that the SLM X3 exhibited all the traits of old AM radio -- far from it: Each song bloomed appropriately. The Rolling Stones are remarkable survivors in a milieu that doesn’t often reward maturity, wisdom, or longevity. Very late in a long career, they’ve returned to what they feel are their musical roots, and have made an album of grace, depth, and raunch when the risk of falling flat on their septuagenarian keisters was high. I thoroughly enjoyed its sound over the MartinLogan SLM X3.

Finally, I heard no problem with bass integration. The Polk DSW Pro 550’s frequency response is 23Hz-160Hz, and the Motion SLM X3’s low-frequency rolloff is 120Hz. So I set the Onkyo receiver’s bass-management crossover to 120Hz -- as high as it will go -- and let ’em rip. From TIE-fighter explosions to Charlie Watts’s kick drum, I felt that the bass was well handled, with no obvious dropouts or bloated responses.

I think it’s a mistake to think that you can get bona-fide home-theater surround sound from a soundbar -- that’s the province of separate front left-, center-, and right-channel speakers. But if your space is restricted or, um, subject to edicts issued by family members other than yourself, then a soundbar may be the optimal solution. In MartinLogan’s Motion SLM X3 you get superb sound quality in three discrete channels with separation that’s among the best I’ve heard from anything like a soundbar, and with clarity, compliments of ML’s Folded Motion tweeter, that may be unrivaled -- again, for a soundbar. Despite the small size, I never felt that the sound was being cheated. The Motion SLM X3 gave every extraterrestrial effect and every musical note its due. And once I was plonked down on my own keister with a movie of enormous fun, I forgot to worry about the sound -- I sat back and enjoyed it. Nothing could recommend the Motion SLM X3 more.