In this brave new world of Wi-Fi-driven audio, there is no understating the importance of a robust home Wi-Fi network, and in our move from northern Virginia to coastal Carolina we’ve met the issue of robustness head on. We’ve completely revamped and upgraded our Wi-Fi network, which now includes a dual-band range extender so that even the farthest reaches of our new house produce all four bars on the Wi-Fi signal strength indicator. As a precaution, I also put into effect Plan B and had every room in the house wired with Ethernet -- RJ45 ports with CAT5 cabling -- because, as good as Wi-Fi is, it can be maddeningly unpredictable. As it turned out, Plan B was essential to reviewing Bluesound’s Pulse Soundbar and Pulse Sub.

The Pulse Soundbar ($999 USD) is made of sleek, rubberized aluminum, measures 42.5”W x 5.5”H x 2.75”D, and weighs all of 15 pounds. It can be placed on a flat horizontal surface or mounted on a wall. The mounting brackets and hardware are included, as are two nifty “kickstand” legs for setting it on a shelf, mantle, or table. Two acoustically transparent metal grilles conceal two 3/4” soft-dome tweeters, two 2” midrange drivers with treated-paper cones, two 4” woofers, and two passive radiators. All but the last are powered by a 120W DirectDigital amplifier. The drivers are made by PSB and the amplifier by NAD; both companies, like Bluesound, are owned by Lenbrook Industries. This also means that the amplifier and drivers are top quality with the objective of wedding superb sound to wireless technology. In a first for a one-box Bluesound speaker, the Pulse is a stereo design. 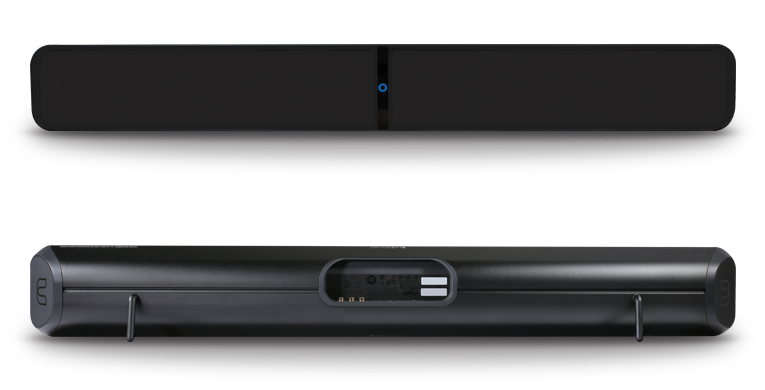 On the tiny rear panel are a subwoofer output (RCA), stereo audio inputs (RCA), an optical audio input (TosLink), a USB Type-A port that will accommodate any FAT32-compatible mass-storage device including flash drives, a LAN port (Ethernet), a standby button, and a power receptacle. There are also a USB Type-B port and a service button that are not intended for use by the buyer. On the front, between the two grilles, is a single status LED. 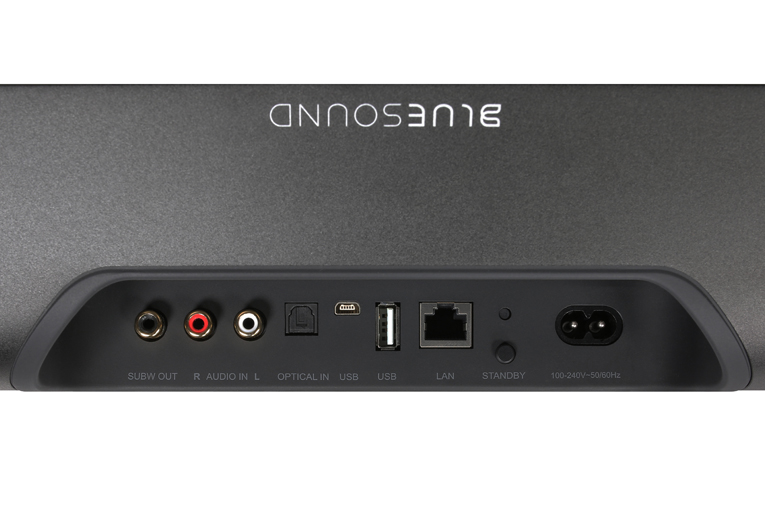 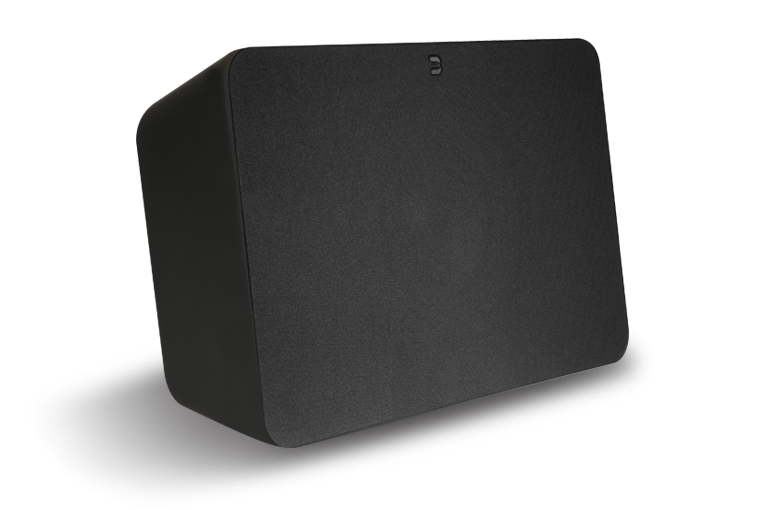 On the rear panel are the crossover, phase, and volume controls, and a Power Mode switch. With the last, the Pulse Sub can be set to On, Off, or Auto. In Auto mode, the Pulse turns itself on only when it senses an audio signal, and turns itself off after having detected no signal for a few minutes. On the bottom panel are an LFE input -- to be used only when the Sub is not paired with a Bluesound Soundbar -- stereo pairs of low-level inputs and outputs, a power receptacle, the master power switch, and a pairing button for connecting wirelessly to the Pulse Soundbar. If you connect the Sub with an interconnect, both low-level inputs must be used -- if your receiver, like the Pulse Soundbar, has only a single sub output, you’ll need a Y connector.

To properly function, all Bluesound products require a home network akin to a LAN, preferably a Wi-Fi network. Of course, because Bluesound is selling its wirelessness -- place Pulse and Sub anywhere near an AC wall outlet and you’re in business -- they encourage a Wi-Fi connection to the home network for all of their products (other than the Vault 2 streaming CD ripper and storage device). Without a LAN, they don’t work at all.

The Pulse Soundbar is installed and operated through an application, BluOS, downloadable from Google Play, Apple’s App Store, or Bluesound’s website. BluOS can be used on Android, iOS, and Kindle mobile devices, as well as Windows and OS X desktops. The installation process was simple and straightforward. Since my review of Bluesound’s Node 2 streaming tuner, Pulse Mini streaming loudspeaker, and Vault 2 in June 2016, the company has modified and considerably streamlined BluOS. This time around, I found the installation process ridiculously easy. Once you’ve identified your network to BluOS, the app does the rest. 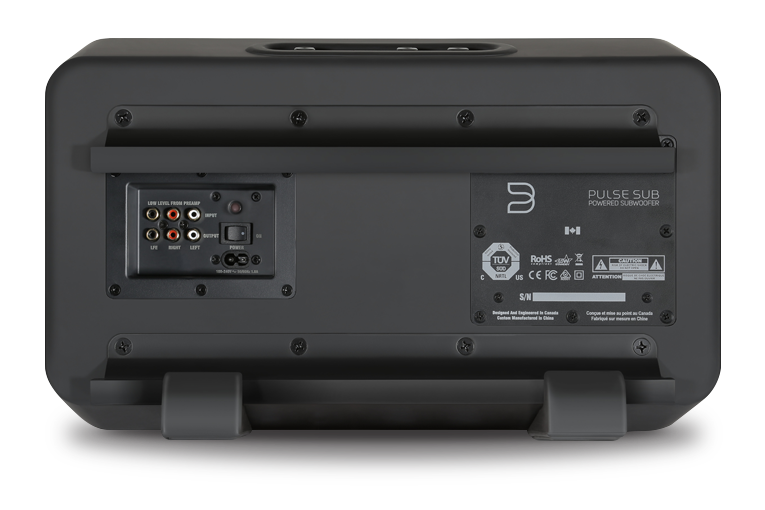 The Pulse Sub was even easier: Plug it in, set levels, hit Sub Connect on the Pulse Soundbar’s BluOS menu, and press the Sub’s Pairing button. That’s it.

Only that wasn’t all of it.

This is where your home Wi-Fi network comes in. At first, the Pulse Soundbar picked up Internet Radio and faithfully picked off whatever music was stored on our network. Then it began to balk. This wasn’t entirely its fault -- it was the network’s. Turns out our new range extender breaks the router’s signal into discrete 2.4GHz and 5.0GHz signals, each with its own network identifier, the 5.0GHz signal being the stronger. For some reason, the Pulse Soundbar could “see” only the 2.4GHz network, and because that was the weaker signal, the music fluttered in and out. Then the 2.4GHz signal failed completely. I had a Wi-Fi component to review, and no effective Wi-Fi connection.

This is why I installed Ethernet in every room. Thus hardwired, the Pulse Soundbar sang like a lark on amphetamines. And if you connect the Soundbar to your network via Ethernet, there’s no installation procedure: it “sees” the network and sets about its business. The Pulse Sub connected to the Soundbar effortlessly and seamlessly.

Bluesound’s Quick Start guides are just that: things to get you up and running. A user manual is available online, but it mostly describes each component’s switches and settings. The real meat of any Bluesound product is the BluOS controller, which is loaded with features. Some of them are intuitive (finding the list of online radio options), others less so. The Support section of Bluesound’s website offers a user-driven knowledge base, and options for e-mail and phone support. 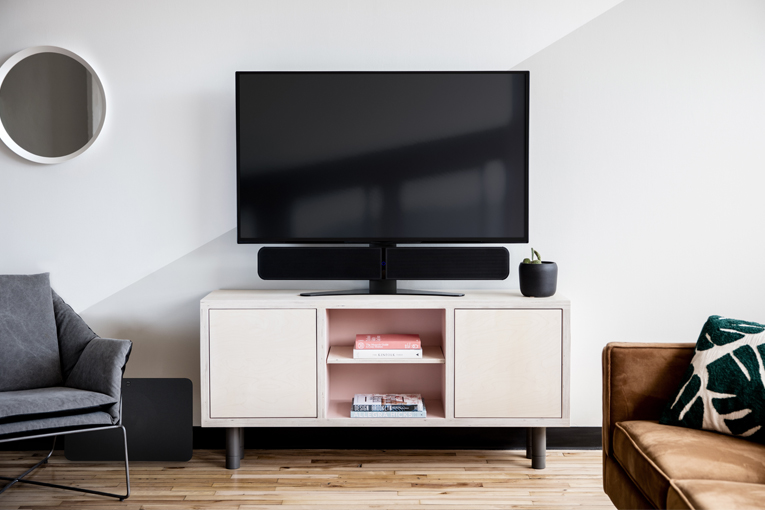 For example, it took a call to Bluesound’s eagerly cooperative support staff to establish that there are switches in the Soundbar’s main menu for enabling the analog stereo or optical inputs: three horizontal bars at the top of the BluOS screen. I’d been looking for these elsewhere, and there are a lot of elsewheres to look in. I suggest that Bluesound take the time to publish a manual of BluOS’s various menus and submenus. It’s necessary; the average consumer is looking for something that produces sound with little hassle, and doesn’t want to spend forever trying to find simple solutions to basic problems.

Internet Radio came through crystal clear -- in the case of Radio Paradise, Bill Goldsmith’s custom MP3s were especially sharp. Unlike too many of today’s speakers designed with home theater in mind, there was no obvious uptilt in the treble. With the Pulse Soundbar’s specified frequency response of 70Hz-20kHz, +/-1dB (-3dB at 55Hz), I didn’t expect much bass below a solid midbass; however, the Soundbar’s bass was generous even without the Pulse Sub in circuit. With the Sub, the low-end frequency response dropped to 30Hz -- deep bass emerged with a rumbling welcome.

It’s worth mentioning that TuneIn has a local radio option that lists pretty much every AM and FM radio station in the user’s listening area. You can dial in your favorite rock’n’roll station or local NPR outlet without the need for a receiver’s tuner. However, this facility comes at a cost. The location of your portable device (iPhone, iPad, Android, Kindle) is pinpointed using GPS, Cell-ID, or Wi-Fi, and that device, tied to your Wi-Fi network to control the Bluesounds, returns publicly broadcast Wi-Fi access points. Voilà -- local radio. Ingenious. And scary. The Pulse Soundbar also has Bluetooth connectivity, which worked superbly. 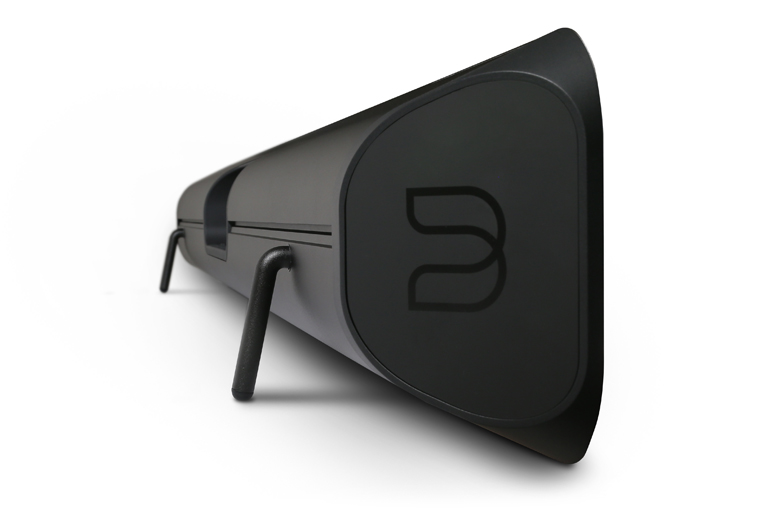 To route TV audio to the Pulse Soundbar, I used a TosLink optical connector from my Vizio D48-D0 monitor to the Soundbar’s optical input. It’s a pretty simple audio transfer from the monitor’s internal speakers to the Soundbar. That said, TV is TV. Precious little of it approaches art, much less high art, so my listening requirements for TV are minimal. Give me Bob Carpenter and F.P. Santangelo’s Nationals broadcasts, or Arlo White and Lee Dixon describing Arsenal pasting Chelsea, without blips or dropouts, and I’m a happy camper. 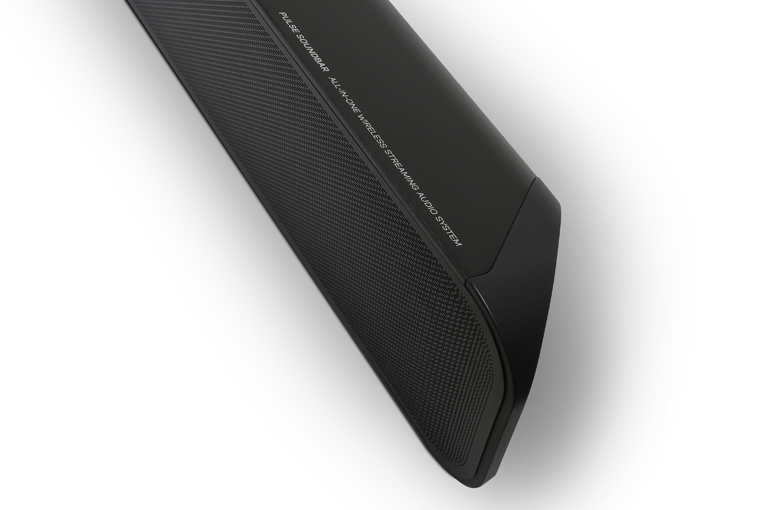 Movies are another matter, in which the sound quality of the soundtrack and score have long been as important as the video. Indeed, especially with horror or action films, the ability of a system to faithfully reproduce sound effects -- and produce them loudly -- has become integral to the experience. This is another instance in which I at first questioned the Pulse Soundbar’s utility. The best movie sound you’ll get out of a stereo analog or TosLink optical connection is two-channel stereo, plus whatever is sent to the subwoofer. This is a far cry from a basic 5.1-channel home-theater speaker array. My Onkyo TX-RZ610 receiver has only one HDMI output, which of course goes to my video monitor, with the Onkyo redirecting the sound to my speaker array. In short, there’s no way to channel the sound from an A/V receiver to the Soundbar except through the monitor. Yes, there is a preamp out, but it, too, is two-channel stereo.

There’s always an alternative. To watch Despicable Me, I routed my Oppo UDP-203 universal Blu-ray player’s HDMI output directly to the Vizio monitor, and the Oppo’s optical audio output directly to the Pulse Soundbar. From the BD’s opening menu to the end credits, the Soundbar fairly burst with sound. Despite the lack of a discrete 5.1 array, dialog was crisp, music remarkably clear, and action sound effects prominent without being intrusive. Not once was the sound muddied or garbled -- not even the Minions’ jibber-jabber. The Soundbar’s control menu includes a Wide mode, with options for None, Wide, or Wider. After a bit of experimenting, I found Wide -- presumably a product of summing the signal and recycling it out of phase -- to have the best effect. 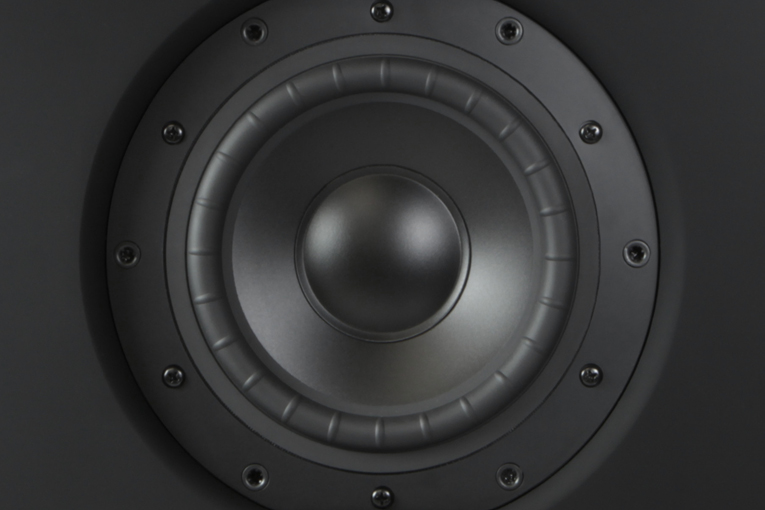 This was also the opportunity for the Pulse Sub to strut its stuff. Explosions, thunks, crunches, and rocket launches roared to life, the Sub playing the Very Loud Big Brother to the Soundbar. Mayhem heaven -- hard to fathom how such a small package can pack such a wallop. Suffice it to say that the combined performance of the Pulse Soundbar and Pulse Sub put to rest any reservations I had about their suitability with cinema -- even in humble, 2.1-channel stereo.

At first, I didn’t know quite what to make of the Pulse Soundbar. Like most Bluesound products, its first gift is music reproduction -- something it did very well, compliments of its beefy NAD electronics and formidable PSB drivers. However, its use as a bona fide soundbar in an A/V array had me scratching me noggin. But as I played music and watched TV and movies, it became obvious that if all you have is a video monitor and a BD player, you can have great TV, movies, and scads of music with the Pulse Soundbar. All you need is this one component and you’re in business -- no need for a separate receiver. Things get even better when you add the Pulse Sub. If you’re squeezed for space and want excellent reproduction of music and terrific sound for viewing, the Pulse Soundbar and Pulse Sub may well be the answer.