As our new house on the North Carolina coast was being built, one of the things Mrs. East and yrs trly decided was that this winter we weren’t going to shovel snow. If you’ve shoveled snow, you get this. If you haven’t, it’s like jail -- something you don’t want to experience. So what better way to adapt to coastal life than to rent a beach condo? One thing we’ve learned over many years of summer Carolina Beach rentals: Good luck getting one with anything close to acceptable audio. With good reason, seasonal landlords don’t trust renters with anything but the cheapest, most rudimentary audio and/or video gear. 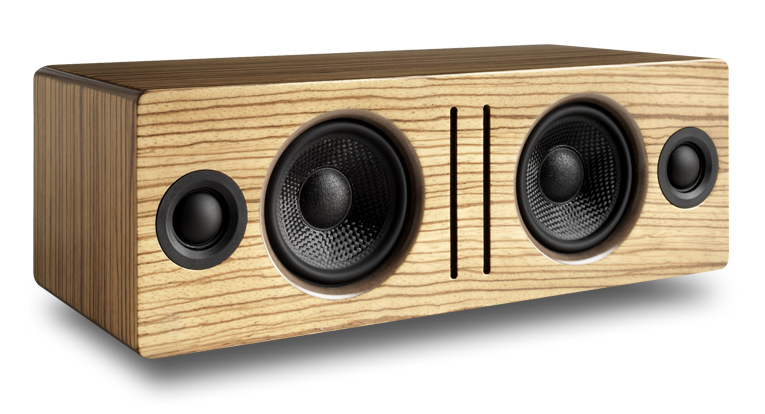 So when Audioengine suggested that we preview their new B2 Bluetooth speaker, we leapt. The prospect of four months of less-than-stellar sound, regardless of the setting (Christmas on the beach, anyone?), was something we were unwilling to entertain -- especially since the B2’s progenitor, the A2 powered bookshelf speaker, had served so ably in our Mac Mini system since I’d reviewed it in July 2008. Imagine a Bluetooth speaker with the power and grace of the A2.

Audioengine’s B2 Bluetooth speaker ($299 USD) combines two A2s, laid on their sides and joined base to base in a single enclosure measuring 12.25”W x 4.25”H x 5.5”D. Even the two slotted bass ports of a pair of A2s appear side by side at the center of the B2’s front panel. The B2 has two 2.75” Kevlar midrange-woofer drivers, and two 0.75” silk-dome tweeters with neodymium magnets. Electronics include a dual-mono class-AB amplifier with power outputs of 15Wpc RMS and 30Wpc peak, and a Texas Instruments PCM5102A DAC chip. The cabinet, of 18mm-thick MDF, is finished in your choice of Walnut, Zebrawood, or Black Ash, and the rear panel is a model of efficiency: power-cord receptacle, rocker power switch, stereo mini-jack audio input, volume control, a light indicating successful pairing with a Bluetooth device, and a screw-in antenna.

Okay, I know -- who uses antennas any more, other than for high-end Wi-Fi routers? Well, this antenna serves a useful purpose: The B2 won’t function without it, and it enables a signal range up to 100’. I’ve been using a diminutive Urban Beatz RockOn as a convenient, portable Bluetooth speaker, and its range on a good day is 25’-30’. So 100’ is a big deal. To test this, I set the B2 on our condo’s back porch -- the one that overlooks the ocean -- and my iPad on the front porch, 75’ away. The B2 played on without skipping a beat. If you don’t like the antenna’s looks, you can position it horizontally; when I did so, it still worked quite well. 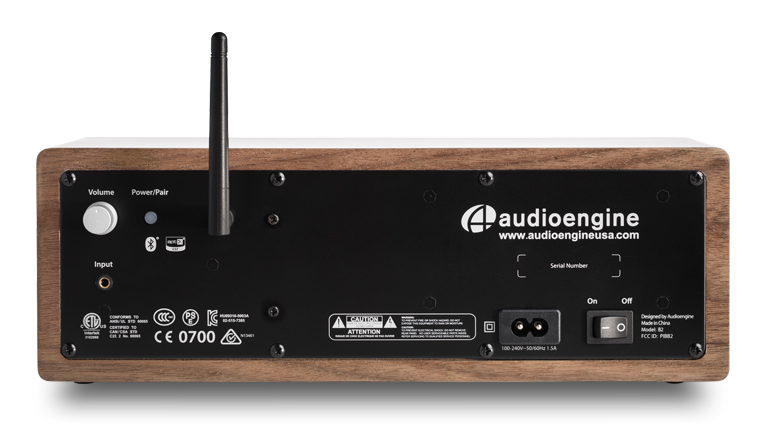 The B2 also includes Qualcomm’s aptX Bluetooth codec, designed to produce optimal sound quality while reducing Bluetooth’s transmission bitrate. This would mean that one could get near-CD sound quality from Bluetooth’s limited bandwidth. However, I’m not sure what aptX does or means in a compressed world, where the coin of the realm is the lossy-compressed MP3. I’ll tell you one thing: aptX doesn’t hurt sound quality -- at least not in the test environment.

Ah, yes, the test environment. I installed the Audioengine B2 in our Carolina Beach rental condo’s [ahem] great room. In beach parlance, a great room is a living space that’s not a bedroom or bathroom, but usually includes the kitchen. Our great room is a modest, comfortable space in which the B2 fit quite nicely, in terms of both its size and its ability to fill the room with sound. I plugged it in, screwed in the antenna, hit the power switch, and within seconds the B2 had found and paired with my iPad. A few seconds later, courtesy the condo’s Wi-Fi connection, Radio Paradise (radioparadise.com) filled the room. It was that easy.

Any sound source with Bluetooth connectivity will work with the B2; e.g., Bluesound’s arsenal of ripping and streaming devices, which are all Bluetooth capable. If I’d had with me, say, the Bluesound Vault 2 and the library of CDs I’ve ripped as FLAC files, the Vault 2 could easily have transmitted them, via Bluetooth and my iPad, to the B2.

As I said, I’ve been an unabashed fan of Audioengine’s A2 powered speaker ever since I reviewed it, eight years ago. (The A2 retailed for $199/pair when I reviewed it. It has since been updated to the A2+, with the addition of line-level outputs and a USB port, for $249/pair.) As nearfield desktop computer speakers, the A2 has no peer, in my experience. Its spectral capture is wonderful, with rafts of robust bass down to 65Hz, and the stereo separation of a pair of them is exceptional -- I’m never conscious of hearing “speakers.” And if I want to sit back in an easy chair and read without repairing to our Music Room, I can turn up the A2s’ volume for a pleasant interlude. All of which is why I eagerly anticipated the arrival of the B2.

I began with Radio Paradise, my go-to Internet rock station -- along with its eclectic mix of rock, it throws in generous doses of world music, jazz, and classical. Owner-deejay Bill Goldsmith, a radio and sound-quality veteran who custom-engineers most of the MP3s he plays on his station, claims that only the rare and well-trained listener can differentiate his lossily compressed MP3s from their CD sources. I’ve heard few MP3s that can compete with Goldsmith’s, and the B2 easily reproduced the depth of soundstage and the clarity of Radio Paradise’s signal throughout the audioband.

Next I turned to one of the zanier Internet enterprises, Radio Free Phoenix, which, unlike Radio Paradise, unrepentantly restricts itself to rock, churning out one zinger after another. But this is decidedly not hits radio: The artists may be familiar, but the songs played are ones you haven’t heard in a while, if ever. A random set: The Wild Feathers, “Happy Again”; Robert Cray, “Moan”; Joe Walsh, “Over and Over”; America, “Chasing the Rainbow”; Country Joe McDonald, “Breakfast for Two.” Radio Free Phoenix streams MP3s, which, like most Internet stations, they find irresistible because MP3s don’t require extraordinary bandwidth. The sound was lovely through the B2, especially the occasional vintage FM commercial, such as one for Easy Rider: “No one under 16 will be admitted without a parent or guardian.” Yeah, sure. That worked all the time. The vintage sound was reproduced by the B2, sounding every bit like an old commercial. 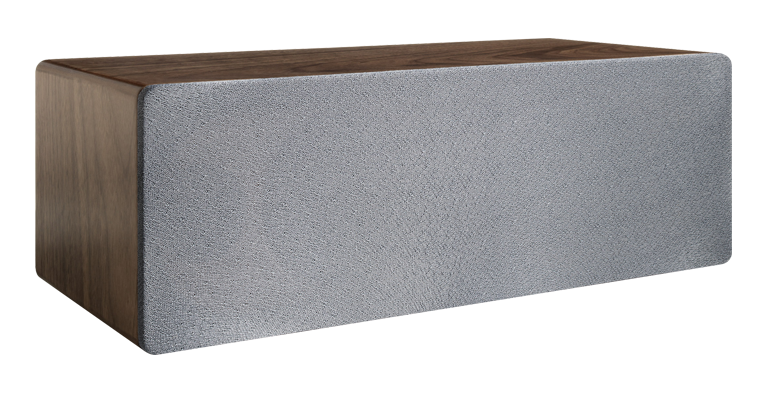 I flipped the dial to KEXP, a Seattle station that broadcasts at 90.3 FM. Since it’s primarily an over-the-air station, and public radio to boot, KEXP spends a lot of air time informing its listeners about local events: concerts, club appearances, art exhibitions, etc. It’s indie radio with a vengeance -- this afternoon I heard American Wrestlers, Blitzen Trapper, Of Montreal, and Okkervil River -- all established bands with footings firmly in the college/indie domain. KEXP mostly broadcasts music from CDs, but also dedicates a couple hours each week to -- hold your breath -- vinyl. The sound had considerable depth -- the B2 rendered it with clarity and accuracy.

Finally, I dipped into my Amazon Music online library. Certain CDs purchased from Amazon are accompanied by a “free” MP3 AutoRip, accessible through Amazon Music. When Amazon introduced this feature, they went back and ripped almost every CD I’d ever bought from them -- from Bonobo’s sublime instrumental Black Sands (MP3, Beat) to Damon Albarn’s supergroup, The Good, the Bad & the Queen (MP3, Parlophone), to Rosanne’s Cash’s epic The River & the Thread (MP3, Blue Note). Through the B2, every guitar trill, drum thwack, bass plunk, and voice sounded far better than it does through other Bluetooth speakers I’ve heard, if still not as resolved as when I play the original CD through a bona-fide audio system of CD player, preamp, amp, and speakers. 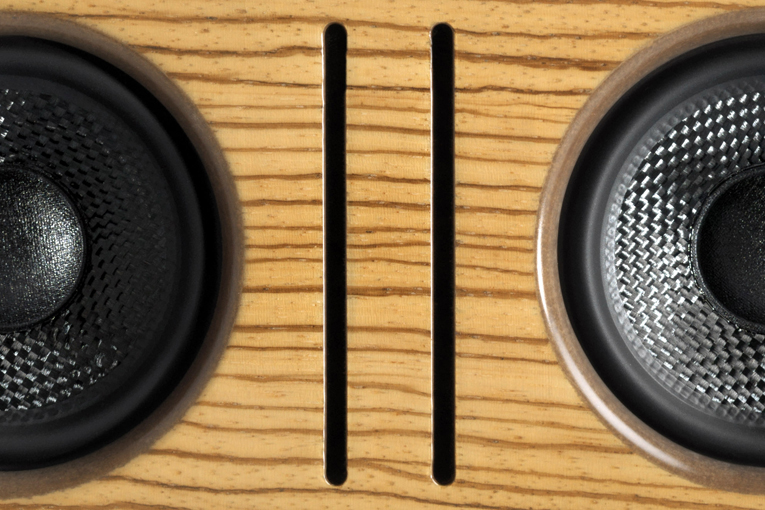 Audioengine’s A2s are separate stereo speakers, which enable you to spread the sound as you wish. They do a lovely job of producing a spacious stereo sound, even listened to in the nearfield in a small space. The B2, however, is a single box, and while it was fairly easy to tell that it was producing sound in stereo, there was no sense of space or separation. Otherwise, the quality of the B2’s sound was every bit the equivalent of the A2s’ -- and that’s nothing to quibble with.

We were dead-on about our rental condo’s audio capabilities: zero, zip, nada. Oh, we could dial in one of those music channels offered by cable systems, but the output is a pair of muy cheapo Insignia TV speakers. Ugh. We’re already planning to bring along a couple boxes of CDs and a portable CD player to plug in to the B2. Lying around somewhere is my old iPod, filled with uncompressed music files. And if I can get the Bluesound Vault 2 to work with the condo’s DSL modem, we’ll have its FLAC files as well.

So the winter will pass affably, with as much music as we’ll need -- but without the Audioengine B2, it would be an empty exercise. The B2 is a nifty little box, with substantial Bluetooth range and the great sound of the A2s. For our little corner of paradise, which lacked only music, it’s a lifesaver.

If you have a similar need, or simply want to expand your audio system into another room in your house, Audioengine’s B2 is a lovely solution. Its efficiency and fitness to the task are alone enough to recommend it -- and its sound is glorious. All of which is enough for me to suggest that it should be on your short list of Bluetooth options.