Audeze Sine headphones measurements can be found by clicking this link.

Most new headphones are just permutations of past designs. Not the Audeze Sines. They’ve got two genuinely unusual, perhaps even unique, features. First, they’re an on-ear design with planar-magnetic drivers -- the first ever of this type, Audeze claims. Second, they’re available with analog and digital cables.

The Sines are unusual in other ways. Unlike many, perhaps most, audiophile headphones, they were designed by an outside industrial design firm: BMW Group Designworks. Rather than Asia, they’re made in Southern California. They’re one of only two travel-friendly planar-magnetic headphone models I can name, the other being Oppo Digital’s PM-3. The earpieces are slim, and swivel to fold flat; they fit pretty easily into a typical laptop computer bag. 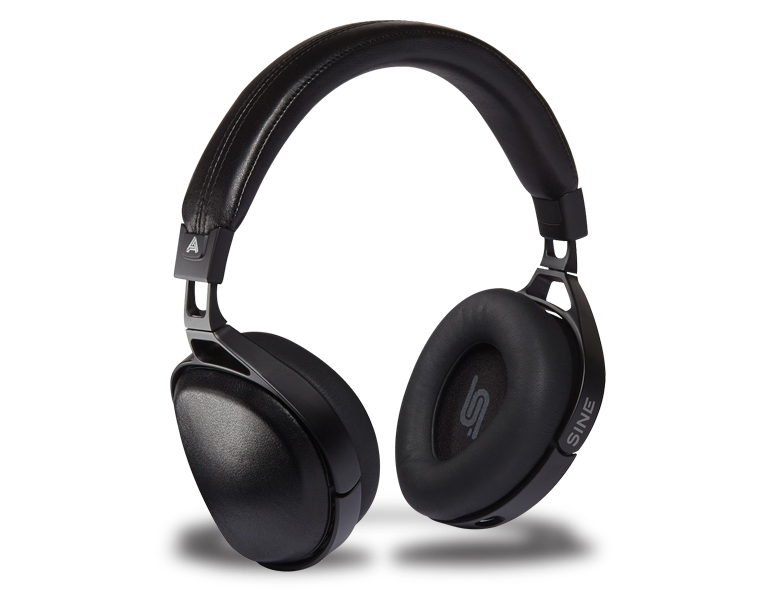 The planar-magnetic driver is custom-designed and manufactured for the Sines. It measures 80 by 70mm, which gives it nearly eight times the surface area of the 30mm round drivers used in typical over-ear headphones. This means that the Sines should play louder and deeper without distortion.

The analog cable is tipped with a conventional 3.5mm plug, and offers no controls or inline microphone. The Cipher digital cable is much more functional, with a built-in microphone for phone calls and voice commands (i.e., Siri), and play/pause and track-skip controls. The Cipher also includes an integral 24-bit/96kHz DAC, digital signal processor (DSP), and headphone amp. It’s terminated at the source end with an Apple Lightning connector, which is compatible with recent-model iPhones, iPads, and iPod Touch music players. The Cipher’s internal electronics are powered by the iOS device via the Lightning connection. 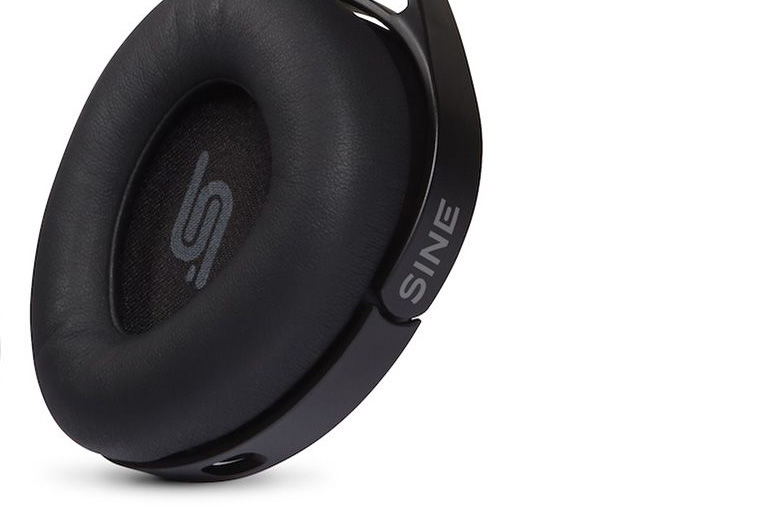 With both cables, the Sines retail for $499 USD; with just the analog cable, they’re $449. No Android-compatible digital cable has yet been announced; my guess is that that will have to wait for USB-C to make it into more Android devices.

Unusually for headphones designed at least partly for travel, the Sines do not come with a carrying case, only a soft carrying pouch. Other than the two cables, all you get is a 3.5mm-to-1/4” adapter.

In some ways, the Audeze Sines are an extraordinary design. The detachable cables are easy to install and remove (even when you’re wearing the headphones), yet nearly impossible to pull loose accidentally. The plugs, which are standard 3.5mm mono units, are attached to the cable at a sharp angle, so a tug on the cable can’t loosen them. The cables are flat and probably impossible to tangle, yet are in no way stiff or cumbersome.

But for me, at least, the Sines were uncomfortably tight. The headband’s clamping force is fairly strong and the earpads are thin and firm, so the headphones tended to mash my ears. I found the strong pressure initially off-putting, but got used to it after wearing the Sines for 10 or 15 minutes. After 30 or 40 minutes I usually found myself wanting an ear break and took them off for a bit, but as soon as I put them back on, the discomfort returned. I have a pretty large head (size 7 3/4) -- your experience might be better. However, my friend Lauren Dragan, headphones editor of The Wirecutter, voiced the same complaint, and her head is smaller than mine. 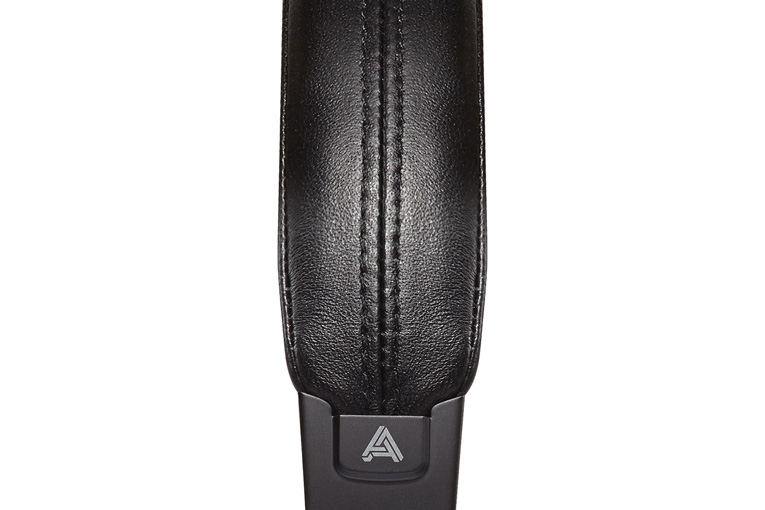 I understand that a good seal is required to get optimal performance from headphones, but few on-ear models mash my ears this much, and many that sound good or great are far more comfortable. After Audeze read the text of this review for fact-checking, they suggested that the headband, which is made of spring steel, can be stretched to loosen the fit. But I’d already returned the review samples, and so didn’t have a chance to experiment with this. However, the idea of actually bending the headband of a pair of $449 headphones gives me pause. What if you bend them too far, and the seal becomes too loose? Can you bend them back? And what if you break them? This is the first time I can recall a headphone manufacturer suggesting that I stretch or bend their product to get it to fit better -- and I’ve tested many on-ear designs that easily accommodate various head sizes without mashing my ears or requiring that I stretch or bend the headband.

Because the Sines are designed to be both true audiophile and travel-friendly headphones, I evaluated them in two very different ways. I took them on trips on the Los Angeles Metro system, driving them through the Cipher cable with my iPod Touch, or through the analog cable with my Samsung Galaxy S6 smartphone. I also listened to them at home using a Musical Fidelity V90-DAC digital-to-analog converter connected to an Audio-gd NFB-1AMP headphone amp, and compared them to several other headphones.

The Sines sounded better with the Cipher cable than they did through an analog connection to my iPod Touch. I’m always impatient with those who assume that an external DAC must be better than the one built into a source device, but that was the case here. For example, when I played the title track -- a lush recording of a brass choir -- of I Only Have Eyes for You, by Lester Bowie’s Brass Fantasy (256kbps MP3, ECM), the snare-drum rim shots sounded like wooden sticks on metal. Through the analog connection, they sounded like toy plastic sticks on metal -- coarser, cruder, with less ambience. With the Cipher cable, the splash cymbal that announces the melody sounds as if lightly struck with a drumstick; with the analog connection, it sounds almost as if the drummer hit it with his palm. Snare drumstrokes had longer decays and more ambience with the digital connection, through which the sound was, in general, more detailed and ambient. (In my measurements, you can see that the Sines’ bass response is somewhat elevated with the digital connection, but I found this effect only barely noticeable.)

It didn’t take me long to realize that many aspects of the Sines’ sound were very, very, very right. When I played one of my favorite recordings of the last year, Cécile McLorin Salvant’s For One to Love (256kbps MP3, Mack Avenue), the Sines sounded better overall than any of the other headphones I compared them to, including Beyerdynamic’s T 5 p, NAD’s Viso HP50, and HiFiMan’s Edition X. With “The Trolley Song” (yes, that trolley song), the Sines sounded extraordinarily natural, with less sibilance than the other headphones, more sense of the body of the piano, and the lowest levels of sonic coloration on the drums. These would make fantastic recording monitors, I thought. 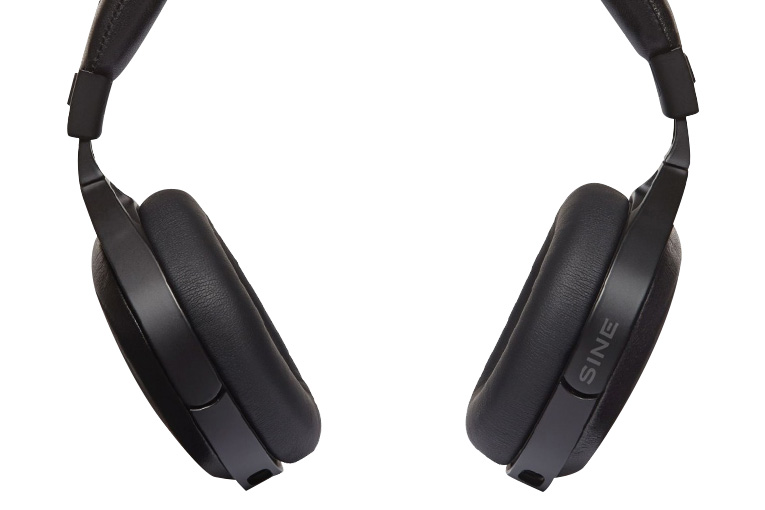 I heard the same uncolored, neutral sound when I played “If the Fire Goes Out,” from Melissa Menago’s Little Crimes (24-bit/96kHz FLAC, Chesky). There was no sibilance in Menago’s voice, and the Sines made it almost as easy to pick out the individual sounds and sonic images of the guitar and ukulele as if I were watching a live performance from just a few feet away.

The Sines’ sonic character -- or lack of it -- became clearer when I switched to the NADs. The Viso HP50s have been generally acclaimed as being among the best closed-back headphones for around $300, and they’re what I grab when I just need a good set of headphones -- I use them as monitors when I record jam sessions, create test tones, or want to make a quick evaluation of a recording. The Viso HP50s tend to make other headphones sound colored -- but the Sines made the HP50s sound colored. For example, “If the Fire Goes Out” features some sort of bass-pitched percussion instrument. Through the Sines, it sounded like a cajon, which would be in character for the minimalist nature of this recording. Through the HP50s, the bass was comparatively oomphed-up -- more resonant and a little more boomy than the Sines’ flatter response -- and sounding more like a small kick drum. With the NADs I could also hear a bit of coloration of Menago’s voice that sounded like a wrinkle in the response around 1 or 1.5kHz, which gave her voice a subtly edgy quality. Simply and crudely, compared to the Sines, the Viso HP50s sounded “headphoney.”

That’s not to say the Sines were flawless. Through the HP50s, I could hear a bigger, more captivating sense of space. That’s important with a recording such as Little Crimes, which was recorded live in a church using Chesky’s Binaural+ method. The Sines lost some of that natural ambience. I could also hear a little more high-frequency detail in the guitar with the HP50s. Still, I preferred the sound of the Sines overall.

With more conventional recordings, such as “Hands Off . . . She’s Mine” from The English Beat’s I Just Can’t Stop It (16/44.1 WAV, IRS), I loved the Sines’ ultraclean presentation of the midrange, especially with voices, guitars, and saxophone. The midrange colorations and treble accentuation that so many headphones produce were completely absent with the Sines, making their sound refreshingly unfatiguing. Again, switching to the Viso HP50s, I heard more bass, a bigger sense of space, and a sound that was more vivid without being brighter. 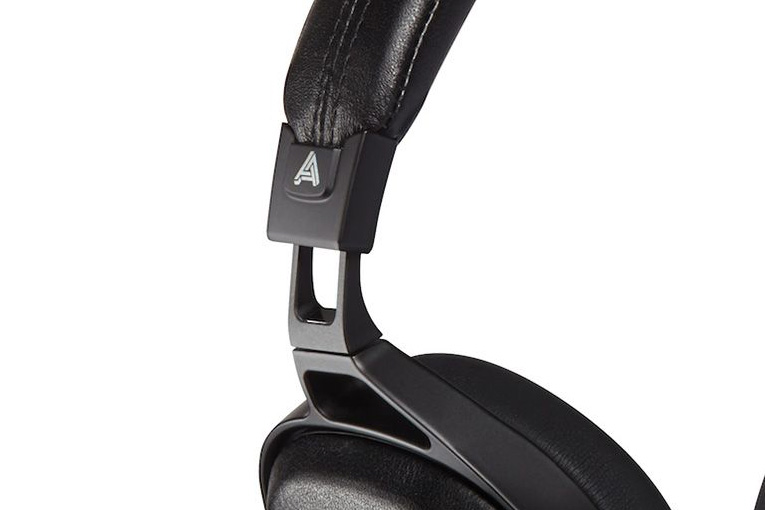 When I listened to Glen Hansard’s “When Your Mind’s Made Up,” from Once: Music from the Motion Picture (16/44.1 WAV, Columbia), I described the Sines’ sound as clinical -- not as vivid or as spacious as through the NAD HP50s or the Beyerdynamic T 5 p’s, but cleaner, less colored, and more direct. The Sines brought out Hansard’s voice more and kept the bass notes under better control, yet lacked the kick-ass groove of, particularly, the HP50s.

This general lack of kick will probably make the Sines a less compelling choice for rock fans; when I played “King Contrary Man,” from the Cult’s Electric (256kbps MP3, Beggars Banquet), the snap of the snare sounded impeccably clean and natural through the Sines, but that much of the fundamental tone of the drum head was lost.

With poor-quality recordings, such as “The Want of a Nail,” from Todd Rundgren’s Nearly Human (256kbps MP3, Rhino/Warner Bros.), the Sines again produced less sense of space and groove than the other headphones I compared them to, but sounded by far the best: cleaner and more focused. The other headphones emphasized more this recording’s harsh, hashy sound.

To me, the Audeze Sines have much the same character as a set of world-class recording-studio monitor speakers: They present everything cleanly and with near-zero coloration. But just as recording monitors often don’t sound as spacious or as exciting as a good set of hi-fi speakers, the Sines often present a less involving sound than some of the headphones to which audiophiles often gravitate. Whether or not you dig that depends on what your philosophy of sound is. I would enjoy having headphones that sound like this . . . if they were comfortable, which for me the Sines are not. But if you’re looking for a nice, clean, uncolored sound, I recommend you try the Audeze Sines at a dealer or your nearest hi-fi or headphone show.