AKG N60 NC headphones measurements can be found by clicking this link.

When it comes to noise-canceling headphones -- which are designed specifically for travel -- audio reviewers focus almost entirely on their sound quality and on the efficacy of their noise canceling; they rarely consider portability. My guess is that most of these reviewers don’t travel much, and don’t consider how much of a drag it is to have to lug a huge headphone case along. I do travel a lot by air, and I also spend a lot of time on public transit. That’s why the AKG N60 NC’s predecessor, the very similar K 490 NC, has been my favorite noise-canceling headphone since it was introduced, in 2012.

The N60 NCs ($249 USD) pack into a half-moon-shaped neoprene case that measures 7”L x 5”W x 1.5”D and weighs 7.9 ounces with the headphones inside. Compare this to the 8.3”L x 5.7”W x 2”D, 13.9-ounce rectangular case for the Bose QC25s, which itself is something of a miracle of miniaturization. For light travelers, this is a big deal -- the N60 NCs don’t add significant bulk to your load, and easily slip into whatever bag you’re carrying. Most other noise-canceling headphones are just one more bulky thing you have to squeeze into an already overpacked suitcase. 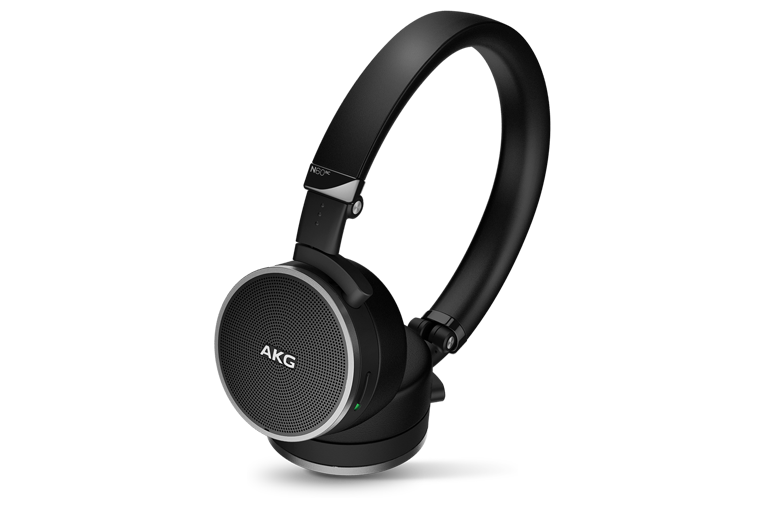 The differences between the N60 NC and the K 490 NC are subtle. Without looking at the model number or the cable (or the many dings and nicks on my well-traveled K 490 NCs), the only thing that distinguishes the new model is its slightly more padded headband. The N60 NCs also add an inline play/pause/answer button with a built-in microphone, so you can easily start and stop the music and take phone calls. Claimed battery life is shorter, though: 30 hours, vs. 40 for the K 490 NCs.

Obviously, when a manufacturer discontinues my favorite product and replaces it with a new one, I’m curious to hear if they’ve made it better or worse. Let’s find out.

In addition to the case and cable, the N60 NCs include a special USB-to-2.5mm cable used to charge the headphones, plus a dual-mono-to-stereo adapter for use on older airplanes whose seats lack stereo headphone jacks.

The special charging cable I mentioned is the worst feature ever of any noise-canceling headphones in history. Lose it and you can’t charge the headphones. This cable can be bought on the Internet, but I guarantee it cannot be bought wherever it is you’re traveling when you lose it, unless you happen to be near Tokyo’s Akihabara district or Seoul’s Yongsan Electronics Market.

For on-ear headphones, the N60 NCs are surprisingly comfortable. I recently wore them on a 4.5-hour bus ride from Munich to Prague, and only toward the last hour did my eardrums start to feel a little scrunchy. I pulled off the headphones, rubbed my ears for a few seconds, and made it comfortably into Prague. This is amazing comfort for this form factor, especially when you consider that most over-ear headphones make my ears uncomfortable after just an hour. 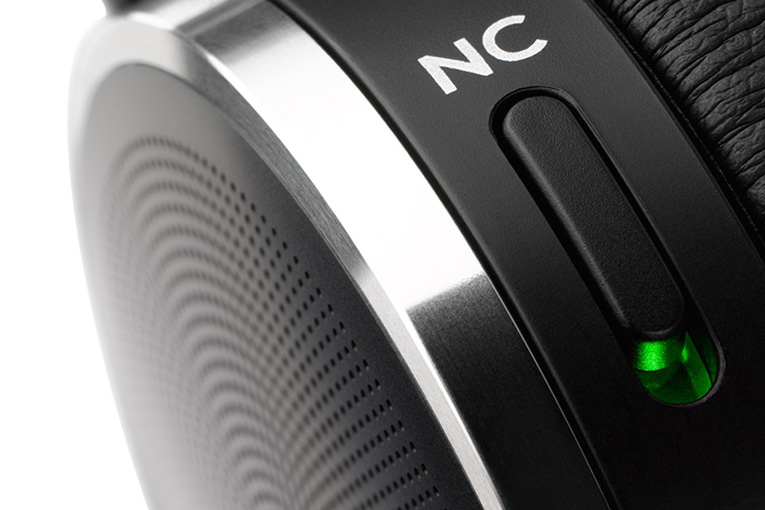 The N60 NCs’ noise-canceling efficacy can’t match what Bose has achieved with the QC25s, but it’s more than good enough for my purposes. It cut out most of the annoying engine drone of the aged Boeing 777 I flew to Munich, most of the road noise of the bus to Prague, and even made my not-at-all-noisy train ride from Munich to Salzburg more pleasant. One plus of the N60 NCs is that they didn’t produce the “eardrum suck” feeling I get from the QC25s. I’ve gotten used to the eardrum suck, but I’ve talked with a few people who find it intolerable.

With one exception, the overall sound of the N60 NCs was generally neutral, with no obvious emphasis or de-emphasis of any part of the audioband other than the bass, which was a bit light compared with most of the headphones I use. However, while their bass wasn’t what anyone would call powerful, the N60 NCs never sounded thin. And in some cases, their lack of bottom-end oomph actually helped clarify the bass.

For example, in the lightning-fast 16th notes of the guitar-and-bass unison runs that kick off “Anthem,” from Rush’s All the World’s a Stage (256kbps MP3, Mercury), I could clearly hear every bass note articulated. Through the NAD Viso HP50s (my reference for ~$300 closed-back headphones) and the Bose QC25s, I couldn’t tell for sure that bassist Geddy Lee was articulating each note. In fact, with this tune the N60 NCs sounded better than either of the two larger, over-ear models, with a full, clear, quick, kick-ass sound that made the other headphones seem comparatively sluggish. 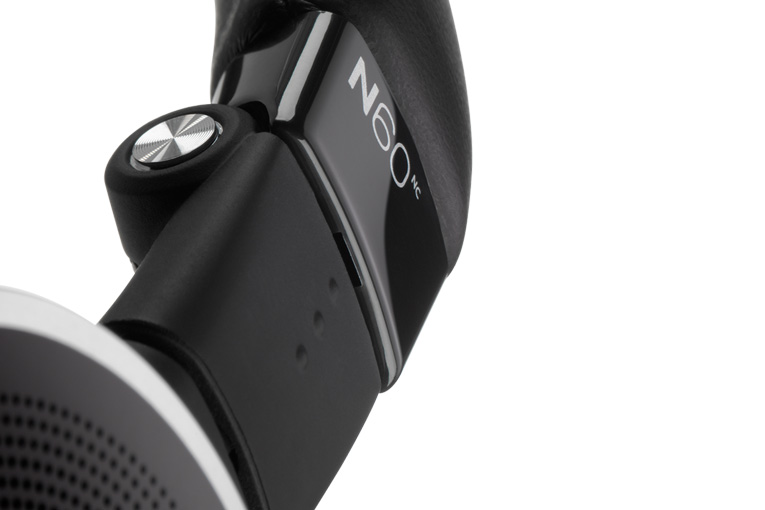 On a much less bombastic recording, Frank Sinatra’s 1958 version of “What’s New?,” from Only the Lonely (208kbps MP3, Capitol), the N60 NCs impressed me by coming pretty close to the sound quality of the NAD HP50s. The N60 NCs reproduced Sinatra’s croon with only very subtle colorations that didn’t distract me a bit, and they captured the natural sense of reverberance in Nelson Riddle’s lush orchestral arrangement. Sinatra’s voice sounded slightly fuller through the HP50s, with a slightly greater sense of space, but the advantage wasn’t even close to dramatic.

My notes describe the N60 NCs’ performance with the version of the blues classic “Nobody’s Fault But Mine,” from Meshell Ndegeocello’s Pour une Âme Souveraine: A Dedication to Nina Simone (256kbps MP3, Naïve), as “seemingly correct,” a perception that remained even through comparisons with the other two headphones. The voice of Lizz Wright, who guests on this track, actually sounded about as smooth through the N60 NCs as through the HP50s, which are renowned for their neutrality. Her voice took on a more natural fullness through the HP50s, but again, the difference wasn’t dramatic -- with the N60 NCs, it was as if I’d turned down a stereo’s bass control by 2 or 3dB. Some people would prefer that -- and, of course, some wouldn’t. The HP50s’ extra bass power made this recording sound a little bigger, but the N60 NCs still delivered a satisfying sense of space. 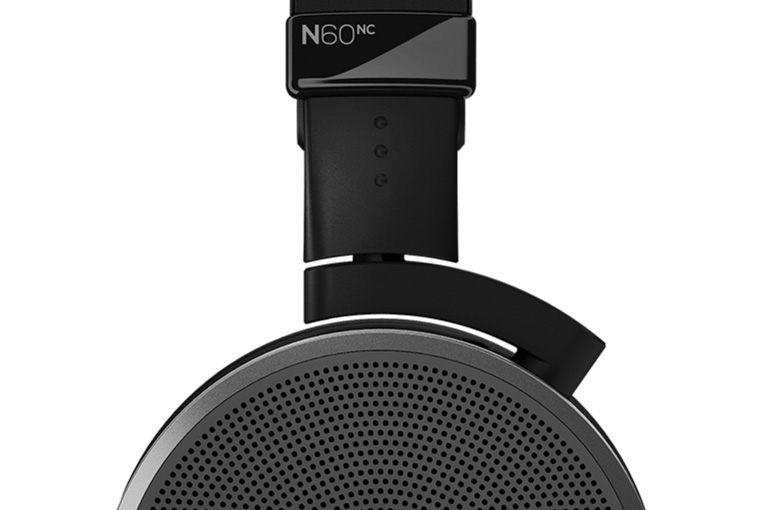 Only with “Straight Life,” from Art Pepper Meets the Rhythm Section (256kbps MP3, Contemporary/Original Jazz Classics), did the HP50s sound a couple of notches above the N60 NCs. Through the HP50s, I could hear more of the spittiness and breath in the tone of Pepper’s alto sax. The cymbals and snare in Philly Joe Jones’s drum kit also rang and decayed more naturally -- when Jones announced a four-bar break going into the piano solo with a firm whack on his snare, I could clearly hear one of the cymbals ringing and reverberating in sympathy. This effect was less audible through the N60 NCs, and even less so through the QC25s. 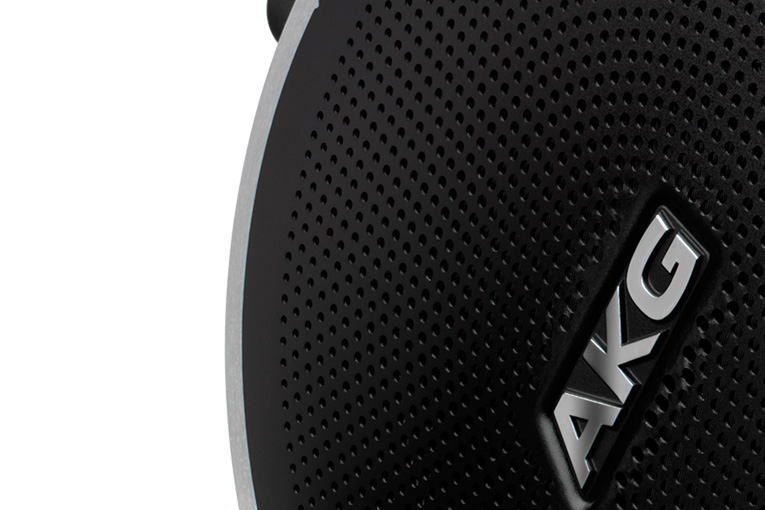 I found just one real flaw in the N60 NCs’ sound: with noise canceling engaged, an apparent tendency with some recordings for the lower bass to be slightly delayed, compared with the upper bass and lower midrange. I first noticed this with the Rush tune; it didn’t really bother me, because it’s a common artifact with bass lines, typically caused by phase shift as the lower frequencies roll off in the outputs of speakers, headphones, or even a bass amp. It can actually sound almost like two separate instruments playing in near-unison rather than a single instrument. I had filed this away as a “maybe mention” thing -- until I was listening to Yes’s Yessongs (256kbps MP3, Atlantic), and “Mood for a Day,” for solo guitar, came on. With the N60 NCs’ noise canceling on, the guitar had a whoom sound in the bass, almost as if someone were gently breathing into my ear. This effect disappeared with the noise canceling turned off. I later tried playing this tune through other headphones, and noticed that while the QC25s and even the HP50s exhibited a little of this effect, it was more pronounced with the N60 NCs. It bothered me, but I didn’t notice it on the rest of Yessongs, and it popped up only infrequently and much more subtly with other recordings, such as the Sinatra album. So it’s a flaw you might encounter and might notice . . . or not.

That the noise-canceling AKG N60 NCs came pretty close to the sound quality of my reference midpriced headphones, NAD’s Viso HP50s ($299), is remarkable. Overall, I do prefer the HP50s’ sound, but if I had to choose between them -- indeed, if I had to choose only one set of headphones to live with -- I’d take the N60 NCs for their much greater utility. Only a few noise-canceling headphones, most notably PSB’s M4U 2s, sound significantly better. For frequent travelers such as I, that noise-canceling capability is a must; it makes for a much better listening experience on airline flights -- which is when I most need and want music. And the N60 NCs’ portability simply can’t be beat by any other over- or on-ear noise-canceling headphones I’ve tried.