Until recently, the product category of loudspeaker had seen little change outside of relentless tweaking by designers trying to refine its basic capabilities. Now, like almost everything else, it’s been absorbed into the Internet of Things and forced to undergo some reinvention. Most people associate wireless audio with Bluetooth speakers: affordable, portable, decent-sounding (good ones, at least). But in the past few years other options have emerged that can tap your home’s Wi-Fi network to deliver an even better wireless music experience than a typical Bluetooth speaker provides.

It’s impossible to talk about Wi-Fi speakers without mentioning Sonos, given that company’s early development of the category. But some more recent Wi-Fi speakers tend to be more audiophile-oriented, with support for high-resolution playback -- which Sonos lacks -- alongside such popular streaming services as Pandora, Spotify, and Tidal. 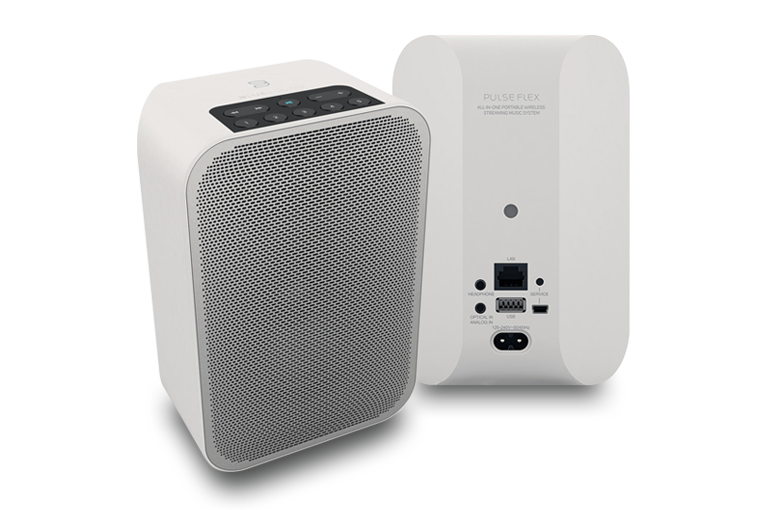 With a fully built-out wireless system featuring a wide range of speakers and supporting gear, including amps, streamers, and networked storage devices, Bluesound provides a solid alternative to Sonos. Bluesound is part of Canada’s Lenbrook Industries Limited, alongside NAD and PSB -- brands known for making reasonably priced high-end gear. Bluesound’s stuff skews pricier than its competition: The tiny Pulse Flex, for example, sells for $299 USD -- a hundred bucks more than Sonos’s own entry-level model, the Play:1. Does the Pulse Flex stand up to scrutiny?

Standing 7.2”H x 3.9”W x 4.9”D, the Pulse Flex is only slightly larger than a typical computer speaker -- an application it can be used for, though the Flex’s rubbery, water-resistant cabinet also allows it to be used in kitchens, bathrooms, even outdoors. (Bluesound has in the works an optional battery pack.) The speaker has a set of illuminated buttons on top to control playback and to call up preset Internet Radio stations -- a task that needs to be carried out using the desktop Windows or OS X app. Ports on the back include wired LAN, USB, a headphone jack, and a 3.5mm input that accepts analog-mini or TosLink digital inputs. 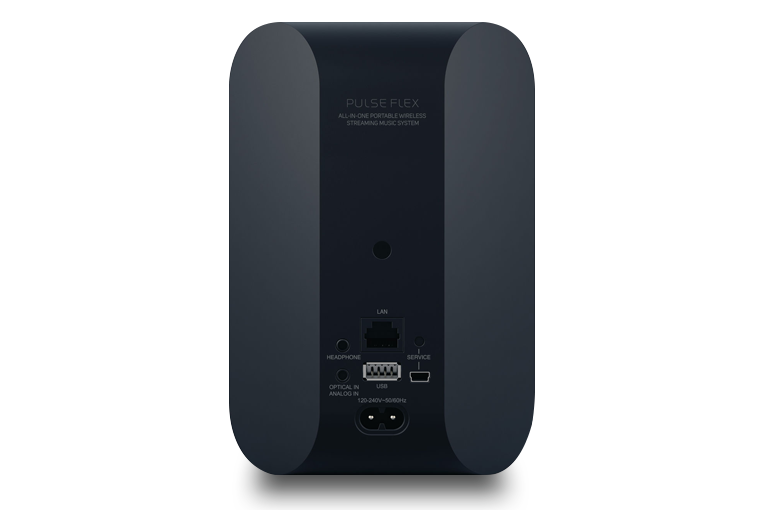 The Pulse Flex’s 3.5” midrange-woofer and 1” tweeter are driven by a 40W amplifier. The speaker supports streaming of up to 24/192 FLAC, ALAC, WAV, and AIFF files, and can also take in wireless audio via aptX Bluetooth. Streaming services on tap in the BluOS controller app include Deezer, Rhapsody, Slacker, Spotify, Tidal, TuneIn, and a handful more. The only one I missed was Apple Music, which Sonos speakers do include, though I could work around the omission by using Bluetooth to send Apple Music streams to the Pulse Flex.

Just as I began writing this review, Bluesound issued the v.2.0 update for its BluOS control app. I’m glad they did: Although I found the app’s previous incarnation to be comprehensive and well thought out, working with it could be a bit confusing compared with Sonos’s distinctly more user-friendly app.

The new version of BluOS is a significant improvement. Music services and general setup are contained in a menu on the screen’s left side; a house-shaped icon on the right of the screen gives you access to player controls, including speaker groups. Adding music to playlists is easy to do, and the graphic display of the album currently playing, or the tracks next up in the queue, made excellent use of my iPad’s wide screen. Switching between playback and control modes -- an issue I had with the previous version -- was now a breeze, and left me little to complain about. 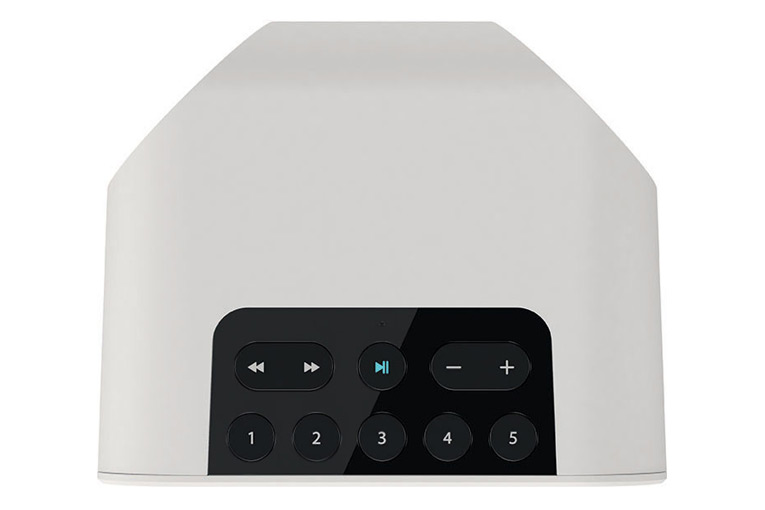 For the most part, setup went smoothly. Though the Pulse Flex is designed to function as a single-speaker system, I received two review samples so that I could pair them for stereo playback, which BluOS supports. While I found it frustrating having to dig through the support section of Bluesound’s website to learn how to link two speakers for stereo, the average user is more likely to place multiple Pulse Flexes in different rooms. Fortunately, setting up multiple Pulse Flexes and grouping them together for playback is something the app makes it easy to do.

For me, the Pulse Flex’s combined optical digital/analog input made it an obvious alternative for use as a TV soundbar. When I connected a single Pulse Flex to my TV, I was impressed with the improvement in dialog clarity it provided over the set’s own speakers. Unfortunately, using two Pulse Flexes in stereo mode with my TV resulted in enough latency to make it unusable for watching TV or movies.

Audio latency is no problem when no screen is involved, so I shifted my focus to music. When I streamed “More,” from Nils Frahm’s Felt (16-bit/44.1kHz FLAC, Erased Tapes/Tidal), the texture of the hammers on strings of the closely miked piano in the track’s first half came through the Pulse Flexes with impressive detail. The densely layered keyboards had a rich ambience that caused the tiny Bluesound speakers to virtually “disappear.” The deeper, darker piano tones that dominate the track’s second half did sound a bit truncated in the bass, but any low end that the Pulse Flexes managed came across as natural, not boosted.

The drums in “Silhouettes (I, II, III),” from Floating Points’ Elaenia (16/44.1 FLAC, Luaka Bop/Tidal), packed dynamic punch, the snare and cymbals coming across crisp, the kick drum solid. The track’s layered electric piano, synths, and voices all had a warm, reasonably full quality that again caused me to overlook the Pulse Flexes’ tiny size. 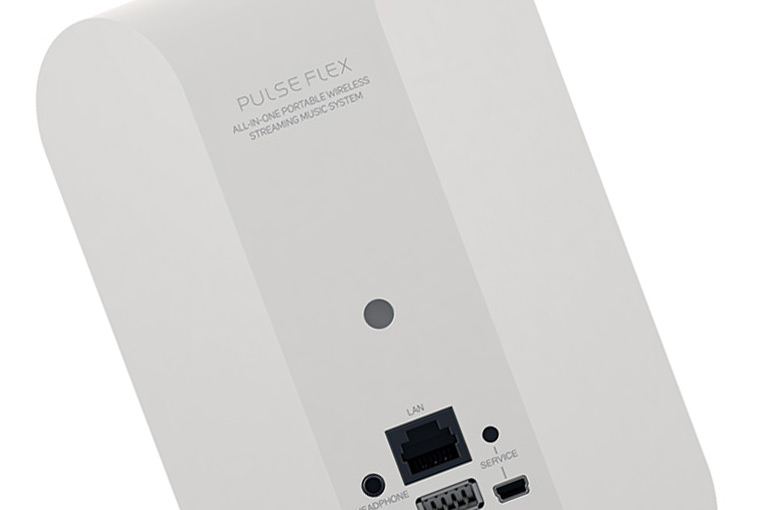 Next up was “Barfly,” from Ray Lamontagne’s Till the Sun Turns Black (16/44.1 FLAC, RCA/Columbia/Legacy). The voices sounded clear, with good layering between Lamontagne and the women singing in the background. The song begins quietly, then slowly builds in intensity until the guitarist rips into a bluesy solo and the drummer hammers down hard on the beat. The Pulse Flexes did a very decent job of tracking the music’s dynamic variations, though I heard some strain when I pushed the volume to high levels near the song’s end.

Accessing hi-rez audio files stored on a USB stick plugged into one Pulse Flex proved no problem -- I selected USB Source in that speaker’s setup menu, selected a track from the menu, and it played back in stereo through both speakers. In the title track of Miles Davis’s In a Silent Way (24/96 FLAC, Columbia/HDtracks), the bowed double bass, electric guitar, and piano at the beginning had a warm, atmospheric, appealingly analog-like sound.

To Flex or not to Flex

Bluesound’s Pulse Flex offers refined sound and a staggering amount of flexibility in a compact package. The connectivity options alone put the Pulse Flex and its brethren at the head of the pack of Wi-Fi multiroom speakers, eclipsing even Sonos in that regard. Compared to other Wi-Fi speakers I’ve heard at similar prices, the Pulse Flex’s bass and dynamic capabilities are somewhat limited, though Bluesound successfully retained the clarity of voices across a wide range of volumes. Add to that a new, much-improved version of Bluesound’s BluOS control app, and the Pulse Flex is not only a worthy competitor to Sonos, but in some ways better -- particularly if you’re interested in hi-rez audio.