A price of $349.99 USD might seem high for a medium-size Bluetooth speaker, but the KEF Muo isn’t just any Bluetooth. With its release, KEF enters a new realm of speaker manufacturing -- namely, of portable wireless Bluetooth speakers -- while upholding its longstanding reputation for making great-sounding audiophile speakers.

The Muo is available in Neptune Blue, Light Silver, Sunset Orange, Storm Grey, or Horizon Gold, and comes in an oblong box of heavy cardboard. The top lifts off to expose the speaker, covered in clear plastic -- nice plastic, not the blister-pack style that rips your fingers. Lift the Muo to discover its accessories: a braided USB-to-Micro-USB cord, three power adapters that allow you to charge the Muo from your home’s power grid, and a quick-start guide and warranty information. 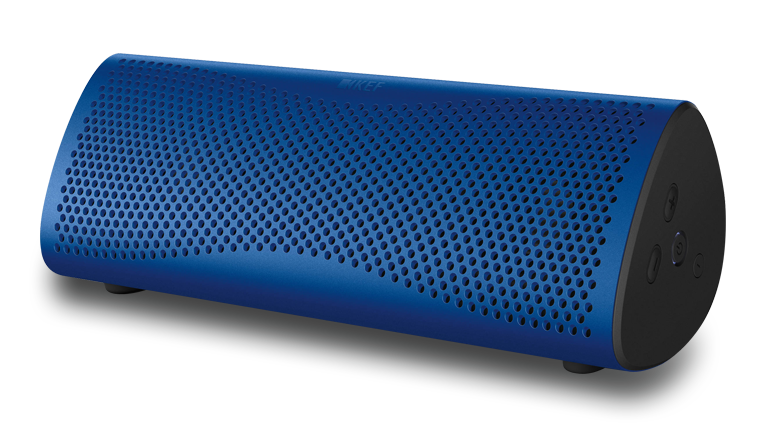 The Muo’s exterior was designed by Ross Lovegrove. He created KEF’s gigantic flagship speaker, the Muon, which stands as tall as a Wookie and costs $224,999.99/pair. The Muo has more or less a prism shape with rounded edges, and the dot pattern of its perforated grille approximates the shape of the Muon’s hourglass profile. The Muo’s body is a single wraparound expanse of brushed aluminum unbroken except for, on the back, a 3.5mm input (for connecting non-Bluetooth equipment) and a Micro USB charging port. On one endcap are a round On/Off button that also indicates battery status, Volume Up/Down buttons, and a Bluetooth pairing button. The other endcap is covered in a rubber-like material so that the speaker can be stood on end. For horizontal placement, two hefty rubberized feet keep the Muo from walking away at high volumes -- at which it vibrates considerably. The overall design is sleek, modern, and elegant.

The technical design is ingenious. Flanking a long-throw Auxiliary Bass Radiator (ABR) are two of KEF’s 2” Uni-Q drivers: a tweeter at the center of a midrange cone. According to KEF, this coincident placement achieves the best acoustical properties when integrating the two drive units. The right/top (depending on orientation) Uni-Q is optimized for the highs, the left/bottom Uni-Q is tweaked for the upper bass and midrange. 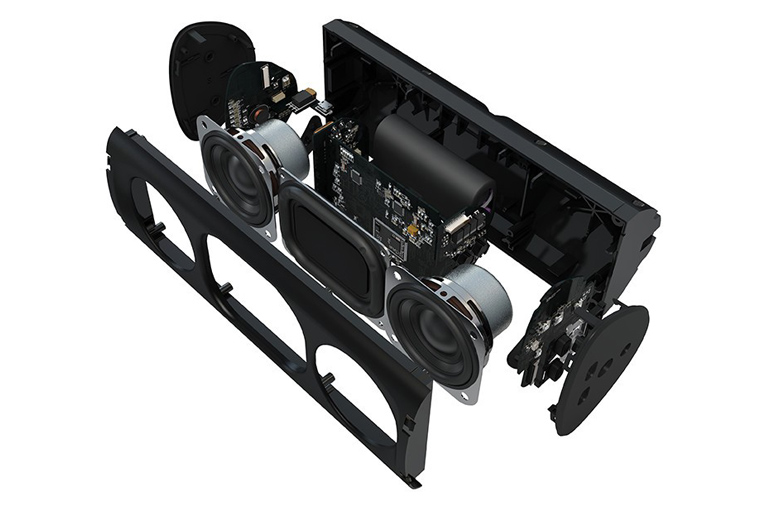 Two Muos can be coupled for stereo or dual mono -- a pleasure I didn’t get to experience, as I was sent only one sample. The battery is claimed to last 12 hours on a full charge. Even when used in its horizontal orientation, the Muo has a small footprint: 8.25”W x 2.25”H x 3”D. It weighs one pound, 14 ounces, and feels solid as a brick, with an extraordinarily sturdy build. For “CD-quality sound,” the Muo uses Bluetooth 4.0 with aptX.

The Muo was a snap to pair with most Bluetooth devices, though not with the Astell&Kern AK Jr player I used for most of my listening. It paired almost instantly with an A&K AK380, but the AK Jr took several tries. Once pairing was completed, the range was about 26’ -- more than the usual 21’ I get with other Bluetooth devices, but less than KEF’s claim of 10m (32.5’). I wasn’t able to control volume from the A&K devices, which presented a bit of a problem -- I wanted to place the Muo 10’ or so away, and had to keep getting up and sitting back down, until I’d gotten the volume exactly right. 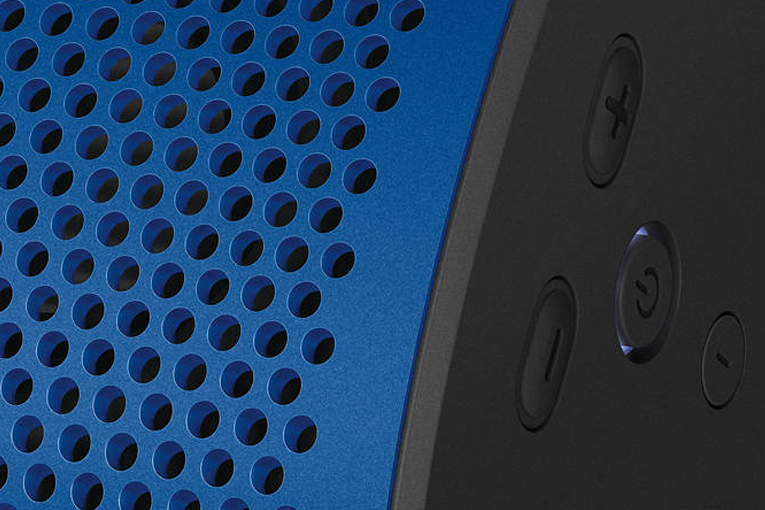 I preferred using my single Muo on its side, but if I had two of them, I believe I’d prefer setting them on end, like mini towers, to listen in stereo.

I’ve tested a lot of Bluetooth speakers, and the KEF Muo played louder than any of them, and without distortion. To fill my fairly large listening room with sound, I set it about three clicks down from its maximum volume setting. It would be fun to play this speaker in a dark room, then turn on the lights and watch everyone’s jaw drop.

Both A&K players allow me to listen to high-resolution as well as CD-quality tracks, so 99.99% of the time I listened to hi-rez. I briefly tried my iPod Touch, just to confirm that its volume control would control the Muo. But having to adjust the volume on the Muo in order to use the A&K players was worth the effort. Comparing the A&Ks’ sounds to the iPod’s confirmed that the Muo is a genuine high-fidelity speaker that deserves the best signal possible. The A&Ks sounded better than the iPod. 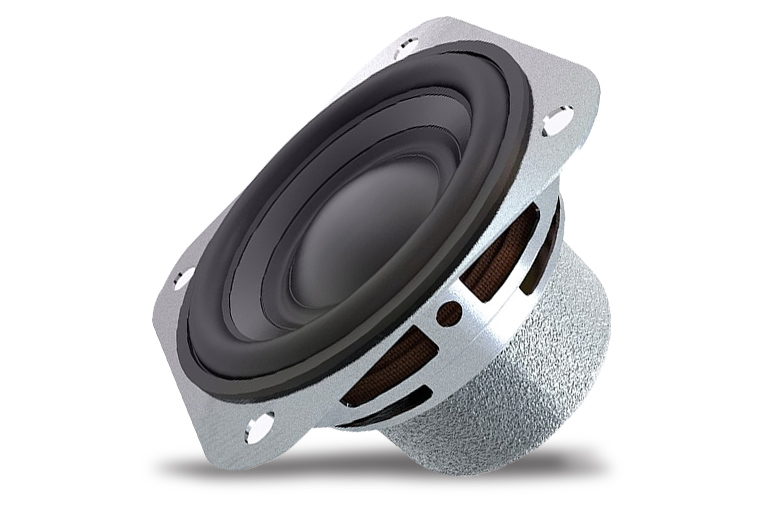 I began with Gianandrea Noseda conducting the BBC Philharmonic in Liszt’s The Battle of the Huns (24-bit/96kHz FLAC, Chandos). I think the 24/96 recordings that Noseda has made for Chandos with this orchestra are among the finest examples of hi-rez engineering, and the Liszt is no exception. The work is scored for a huge orchestra, including a full brass section, organ, and a lot of percussion. Of course, even Bluetooth 4.0 knocks the resolution down to 16/44.1 CD quality, but the sound was still terribly impressive, with explosive dynamic range and excellent clarity. And when I abandoned Bluetooth and connected the Muo with a 3.5mm cable, it sounded even better.

The AK380 player came with a lot of files already installed; one of them was Michael Jackson’s Bad (24/48 FLAC, Columbia). Jackson’s voice sounded very realistic, with excellent presence, and all instruments had punch and pizzazz to burn while sounding clean as a whistle. This was high fidelity.

“The Wind,” from Keith Jarrett’s Paris Concert (16/44.1 FLAC, ECM), was also on the AK380’s playlist. It presented the Muo with the challenge of balancing Jarrett’s percussive attacks on piano with the resultant tones -- a test it passed with flying colors. To my mind, this is the way a piano should sound. 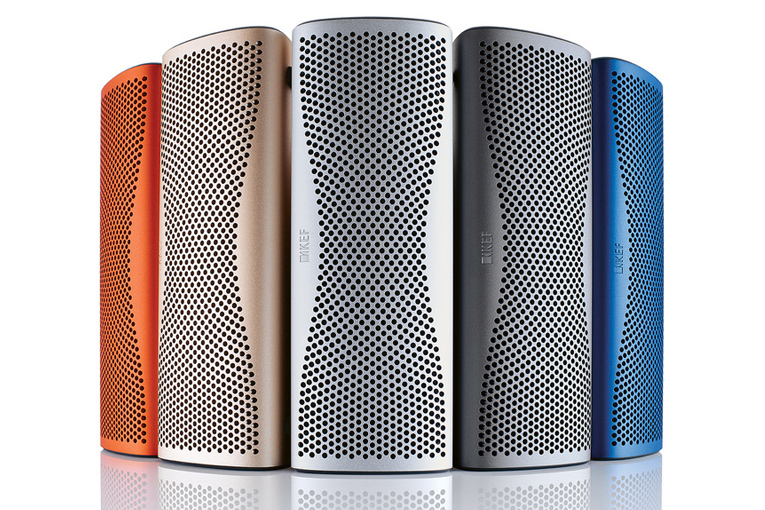 With its intricate registrations and low bass tones, Michael Murray’s performance of Marcel Dupré’s Final, Op.27 No.7, on the organ of St. Sulpice, Paris (16/44.1 ALAC, Telarc), ought to have scuttled the Muo, but it didn’t. Though the Muo had to double a few of the lowest notes up an octave, there was enough bass to make it an enjoyable listening experience. The little Muo had remarkable bass for its size -- the best of any Bluetooth speaker I’ve heard.

The KEF Muo is a serious music-reproduction tool intended for those who listen to music seriously, not just as background. Because it was such a joy, I listened to a lot more music than I’d expected to, and found the Muo up to anything I threw at it. It had ample bass, a very clean midrange, and an exceptionally clean, uncolored treble. Those Uni-Q drivers really work. The Muo is the first Bluetooth speaker I’ve heard that actually can be compared with an excellent wired minimonitor.

Admittedly, the Muo is expensive. But if you’re looking for the convenience of a portable wireless speaker and don’t want to sacrifice audio quality, I think it’s worth it. It wouldn’t surprise me if the sound of two Muos throwing a stereo soundstage turned out to be awesome, but I haven’t tried that yet. For one Muo, I’ll have to settle for outstanding. I call this little speaker the Neptune Blue Wonder.