KEF M200 measurements can be found by clicking this link.

Ever since the appearance of headphones from Beats by Dre, the gourmet head- and earphone industry has flourished. In the last few years, practically every big name in hi-fi has released its take on what a high-end headphone should be. Bowers & Wilkins, Cardas, Klipsch, MartinLogan, NAD, Paradigm, Polk, PSB -- even Musical Fidelity. I would have thought that the market would already be saturated, yet only recently has the British company KEF, one of audio’s biggest and most-respected names, launched its first headphone models. I suspected that this was due either to caution, or a lack of deep interest in headphones. Neither turned out to be the case.

When iTunes was launched, KEF looked at the MP3 market and chose not to enter it. But studio-quality material has changed all that. So has public opinion about expensive headphones. KEF spent two-and-a-half years in research and tests before bringing out the M500 supraaural headphones ($299.99 USD) and the subject of this review, the M200 in-ear ’phones ($199.99). That’s a long time in this business -- KEF clearly wasn’t interested in rushing to market with a me-too product, but rather wanted to offer headphones that represent what this innovative company can do. Consider their flagship loudspeaker: KEF began designing the Blade in 1998, but it didn’t go into production until 2011. Anyone who’s heard the Blade will probably agree that it’s far sweeter than just about anything else on the market. The M200s promised a lot for $199.99, but would they actually be any better than the dozens of alternatives already available for about the same price?

The M200s arrived in a nice protective case, with an adapter for airplane sound systems and pairs of silicon eartips in three sizes. The cable, which KEF describes as “high performance,” is terminated on one end with a gold-plated connector. The right earphone has a built-in remote control and microphone for use with digital music players and smartphones.

The M200s are relatively attractive, with an aluminum-alloy chassis that stands out well in a sea of plastic. KEF’s logo appears to be laser-etched on each earphone, and even after several months of use and rough treatment, the little guys still looked brand new. Given their meager one-year warranty, this is a good thing.

Though I was largely pleased with the M200s’ comfort and operation, they may not suit every listener’s fancy. First, the size is on the thick side. Whereas the very small eartips of my recently deceased Shure SE530s and the almost-identical SE535s, which I reviewed last year, made it possible for me to find just the right fit for my ears, I suspect that folks with smaller ear canals may find the KEFs uncomfortable. I had no difficulty getting a good seal in my ears with the M200s, but it took me a while to get used to just how big they felt in use.

When I used them at work, for instance, the M200s were phenomenal, and felt comfortable for hours at a time. On the go, they were less predictable. When I laughed, or even smiled broadly, the eartips’ seal with my canals would loosen -- and using them while running was sometimes problematic. On the plus side, KEF’s flexible Secure Arm, which wraps around the ear, worked well, and let me position the M200s to my preference. I at first worried that I might have to rejig the arms each time I wore the M200s, but I didn’t.

The remote control, also made of aluminum, worked well for me. I used it many times to take telephone calls, both on the go in downtown Philadelphia and in my apartment, and never had any problems with intelligibility. The buttons look cool, but their small size meant that I occasionally had to press them harder than I would have liked. 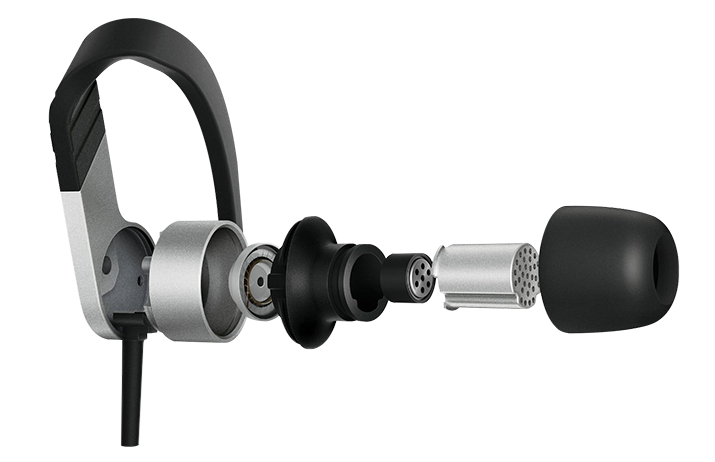 To meet a retail price near $200, many earphones rely on a single driver to reproduce the entire audioband. While fullish-range sound can be had from such a design, multiple drivers often constitute the best way to achieve excellent sound -- just as in loudspeakers. The M200s are intriguing in this regard. Each earphone has what KEF describes as a Dual Dynamic Driver (DDD): a 10mm low-frequency driver recessed deep in the shell, with a “bass chamber” and a passage between it and a 5.5mm neodymium-based driver that handles the mids and highs. The LF driver ostensibly uses the chamber and passage as a port, to aid the M200s’ ultimate low-end extension and combine the outputs of the larger and smaller diaphragms to create a full-range, coherent sound that exits through an aluminum grille within the eartip.

I used the M200s almost exclusively plugged into my Apple iPhone 5 and MacBook Pro, and occasionally with Hegel Music Systems’ Super headphone amplifier-DAC.

The folks at KEF told me that their goal for the M200s was a flat frequency response, but for me, the earphones’ defining characteristic was their prominent, ballsy bass. It was rarely overpowering, but almost everything I played through the M200s had a solid, punchy foundation -- and that’s largely a good thing, isn’t it? I imagine that most people would never forgive a pair of earphones for bass lightness. Given the trashy electronic and dance music that I listen to with reckless abandon, I know that it would be a deal breaker for me.

Indeed, with “Of the Night,” from British upstart Bastille’s All This Bad Blood (320kbps MP3, Virgin) -- the track is a reimagining of Corona’s “Rhythm of the Night” and Snap!’s “Rhythm Is a Dancer,” two classic dance hits of the 1990s -- the bass line came on something fierce, not only deep but taut. I found myself turning the volume up and up to challenge the M200s, but they remained completely composed. Good bass can be intoxicating, and the KEFs delivered not only quantities of bass weight, but bass quality as well. I was not expecting this from a $200 pair of earphones. 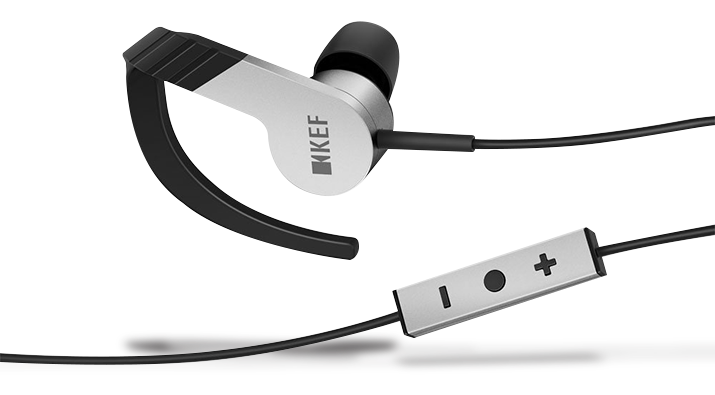 A slightly different challenge was “Safe and Sound,” from Capital Cities’ In a Tidal Wave of Mystery (16-bit/44.1kHz ALAC, Capitol). This recording’s bass line is not only more pronounced, but higher in pitch than the Bastille track’s, and through the KEFs it dominated this song in a way that it never could through the triple-armature Shures. And 34 seconds in, when Spencer Ludwig’s trumpet enters, I was quite taken with just how vibrant it sounded. The KEFs offered such a clear, clean, vivid midrange that they straddled the fine line between articulation and edginess. Indeed, they were as smooth through the mids as some of KEF’s loudspeakers. I can’t imagine that listener fatigue would ever be a problem.

The xx’s “VCR,” from XX (16/44.1 ALAC, XL/Young Turks), begins with an unaccompanied xylophone that rings freely, and I was surprised by the scale of sound with which the M200s were able to reproduce it. Because in-ear monitors are inserted deep in the ear canals, their sound is literally cerebral -- the music seems to be almost entirely inside my head. This sort of sound is very different from what I hear with supraaural headphones such as KEF’s own M500s, which produce a broader, more detached, distinctly external sound. Despite this, the M200s offered a big, dynamic sound that I’d never heard from various Shure in-ear ’phones, even the SE535s ($499).

This quality was reinforced when I listened to Melanesian Choirs: The Blessed Islands -- Chants from the Thin Red Line, performed by the Choir of All Saints, Honiara, for Terrence Malick’s film The Thin Red Line (16/44.1 ALAC, RCA Victor). It’s a raw, unfiltered, gorgeous disc of acoustic music, especially “Jisas Yu Holem Hand Blong Mi” and “God Yu Tekkem Laef Blong Mi.” Through less accomplished ’phones, the a cappella choir, which is somewhat close-miked, can sound a bit vague, and with a lack of differentiation among individual singers. Not so through the M200s, which did an excellent job of capturing the odd shifted foot, intake of breath, momentarily off-key note, and the like.

While sadly retired thanks to cracking insulation, my Shure SE530s were my almost-daily companions for four years. Despite their price of $499, I adored them for a number of reasons: They were as close to full range as one can get in an earphone, with as much bass extension as I’ve heard through large floorstanding loudspeakers. But the Shures’ bass was never overwrought, and they had a golden midrange imbued with a richness of tonality and a touch of warmth that made them infinitely easy to listen to -- which I did, routinely for as long as ten hours a day while pretending to work. The SE530s also had a rolled-off top end that served not only to emphasize the mids, but made the sound more intimate -- expansive soundstaging was never their forte. Finally, the Shures were obscenely comfortable and offered superb noise isolation, which is how I could handle ten-hour stints in the first place.

The KEFs are cut from different cloth. Their sound was crisper and more lively, and made the Shures sound almost a bit woolly and diffuse by comparison. The M200s also seemed to have a flatter, more neutral treble response -- they weren’t as forgiving of poor recordings. They also projected into my head a bigger, more immediate sound -- the difference wasn’t subtle -- and notably more robust bass, though the KEFs likely didn’t dig as deep as the Shures, which cost $300 more. In terms of overall transparency and resolution, however, I think the M200s are within a stone’s throw of Shure’s former flagship model, which is pretty remarkable for KEF’s very first attempt at an in-ear headphone.

KEF’s M200 earphones offer a highly engaging sound that excites without fatiguing, and remains smooth and concise throughout the audioband. Prospective buyers should consider their somewhat bass-heavy tonal balance in light of their own musical tastes. Despite this, I was deeply surprised by the M200s’ high qualities of materials and sound. This model is a strong candidate at the $200 price point, and a laudable freshman effort on the in-ear-’phones front from one of audio’s most respected names.