Bowers & Wilkins P7 measurements can be found by clicking this link. 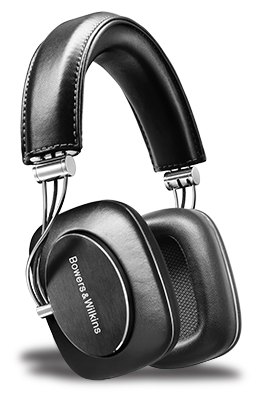 Bowers & Wilkins, the iconic British speaker manufacturer, made their first foray into nontraditional hi-fi with the Zeppelin iPod speaker dock. That product was a great success with their established customers who wanted a small and simple one-box system for a second room, but perhaps more important, it introduced the brand to a whole new demographic. In 2010, B&W unveiled their first headphone design, the P5, which also proved successful with critics and consumers. They followed that up in 2011 with the in-ear C5, which included some genuine innovations in terms of both fit and sound signature. In 2012 came the lightweight, on-ear P3, and in late 2013 B&W introduced their first full-sized, over-the-ear headphone model, the P7, which retails for $399.99 USD.

Bowers & Wilkins’ industrial-design team knows not only how to make an attractive product, but also the importance of unified brand styling. In many ways, the P7s look like a bigger version of the P3s. The rounded, oblong earcups are leather wrapped, and the brushed-aluminum metal ovals that extend out from the center of each have black-anodized end caps with the "Bowers and Wilkins" name engraved. A pair of stiff, stainless-steel wires swoop back and up to connect the earcups to the headband via sturdy metal hinges that allow the cups to fold up for carriage. This arrangement makes for minimal materials and clutter, without the headphones feeling at all fragile. Instead of a plastic case, B&W provides a semirigid pouch that is leatherette on the outside and quilted inside. Taste in such things varies, but I found the total P7 package classier than that of any of its competitors that I’ve seen.

The earcup assemblies slide smoothly in and out of the padded, leather-wrapped headband to adjust the headphones’ size, and the cups themselves have some tilt in the vertical plane, though there’s no provision for the earcups to swivel front to back. Perhaps that’s not necessary, as the earpads’ dual-cavity construction is said to mold to the wearer’s head to maintain a consistent distance between ears and drivers. Though the pads are slightly firmer than average, I experienced good isolation and long-term comfort, and at 1.5” x 2.25”, the openings were large enough to fully accommodate my medium-sized ears. As with previous B&W headphones, the P7s’ earpads are magnetically attached. That permits replacement, should they ever wear out. Removal of the left earpad also exposes the 2.5mm, strain-relieved connection for swapping between the two included 4’-long cables -- one straight, the other with microphone and three-button remote for iDevices. 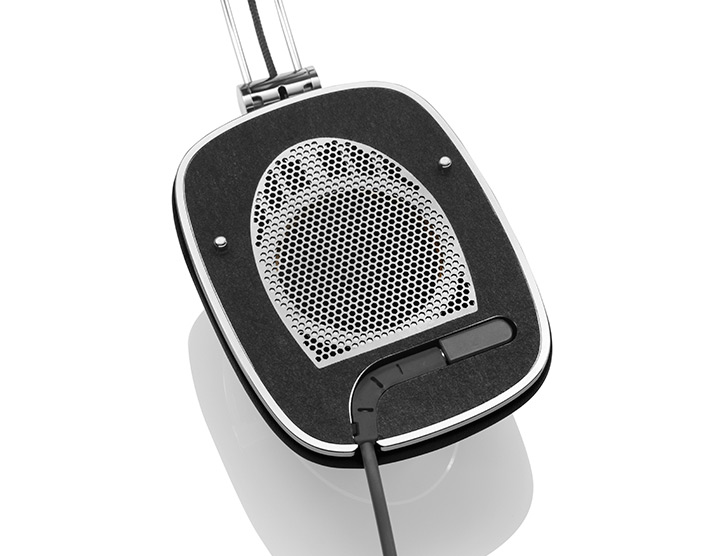 B&W has designed a completely new driver for the P7 headphones. As in a loudspeaker, it incorporates a discrete suspension for the diaphragm, whereas in the typical headphone driver the diaphragm must act as its own suspension. The speaker baskets are perforated and covered with a resistant film to control airflow behind the drive-unit, which is claimed to result in more uniformly pistonic movement, and a voice-coil of lightweight copper-aluminum alloy makes possible quick response to transients and dynamics. The baffle plate is heavily braced and tuned to reduce resonances. Finally, damping material inside the enclosure minimizes reflections that would otherwise color the sound.

B&W specifies for the P7s an impedance of 22 ohms and a sensitivity of 111dB for 1kHz at 1V. That works out to a rather low 94.4dB at 1mW, but the measurements by Brent Butterworth that accompany this review show a more usual 101.7dB. The P7s were easily driven to uncomfortably high levels directly from my iPod Touch 5, and seemed to have roughly the same sensitivity as the Focal Spirit Classic and NAD HP50 ’phones. B&W claims for the P7s a maximum power handling of 50mW, and a total harmonic distortion of 0.3% for a 1kHz tone at 10mW.

The P7s exhibited astonishing levels of clarity and detail. In “San Francisco Bay Blues,” from Eva Cassidy’s Simply Eva (CD, Blix Street G2-10099), they re-created the squeak of Cassidy’s left fingers sliding along her guitar’s strings, the variations in articulation depending on how and where she strummed, and the slap of her palm muting the strings. They also faithfully reproduced the range of Cassidy’s voice -- from soft and sweet to belted blues -- and the subtler shifts in intensity that make her singing so expressive.

The P7s retained their clarity with more complex recordings. SoundStage!’s publisher, Doug Schneider, introduced me to Daniel Lanois’s Acadie: Goldtop Edition (16-bit/44.1kHz FLAC, Red Floor). The liner notes from it and the album’s original release describe how each track was put together, often from bits and pieces left over from Lanois’s previous recording projects, and the extra tracks on this special edition let you hear some of the process he went through to produce the final album. For example, most of the parts of “Still Water” are there in “Still Water (from Eno’s house),” but the beat is kept by a simple electronic bass drum. The album version replaces it with a drum set, the kick drum of which has real texture. The P7s also helped me notice the reverb added to Lanois’s lead vocal, whereas his voice is completely “dry” in the working version. Perhaps the biggest difference between the sketch and the completed song is the addition of electric bass -- and, in true B&W fashion, that bass was fabulously rich and full through the P7s. 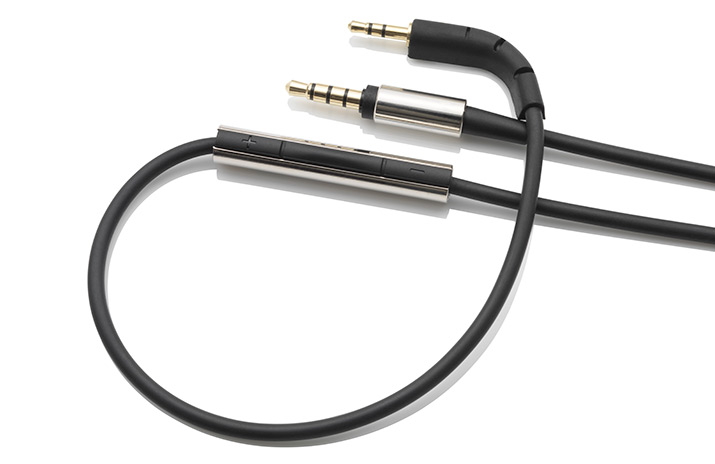 “Lose Yourself to Dance,” from Daft Punk’s Random Access Memories (24/88.2 FLAC, Édition Studio Masters Columbia), also showed off the P7s’ robust bottom end. The broad sound of the bass guitar was accompanied by a kick drum that was muscular enough to be felt as well as heard. The same well-delineated attack that created that physicality made for a beat that was precise and rock solid. The P7s also reached down deeper than most headphones, conveying the substantial size of the bass drum in Peter Breiner’s orchestration of Mussorgsky’s Pictures at an Exhibition, performed by the New Zealand Symphony Orchestra with Breiner conducting (24/96 FLAC, Naxos/HDtracks) -- and delivering the bass drum that opens The Infernal Dance of King Kashchei, from Stravinsky’s The Firebird Suite, in the recording by the Minnesota Orchestra under Eiji Oue (24/176.4 WAV, Reference HRx), with as much slam as I’ve heard from a pair of headphones.

The P7s’ bass wasn’t perfect, though. Their response seemed to have a mild hump around 50 or 60Hz that made some notes from walking-bass lines -- the rhythmic movements up and down the scale that, in most jazz performances, outline the harmonic structure of the tune -- stand out more than others. And while the enhanced bass provided a nice foundation for recordings of full orchestra, things got a little muddled when there was a lot going on in the double basses. These excesses were, however, rather mild compared to what I’ve heard from other big-bottomed cans. 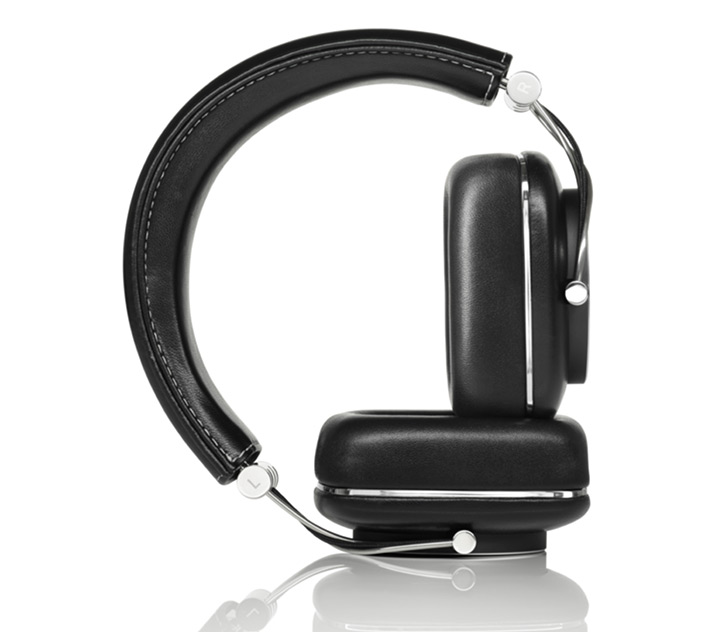 The P7s’ attention-grabbing bass was part of an overall ease with wide dynamic contrasts. In recent reviews, to judge macrodynamics, I’ve used a recording of Schubert’s Symphony No.6 by the Swedish Chamber Orchestra, under Thomas Dausgaard. This time around I used the same crew’s new album of Symphonies Nos. 3, 4, and 5 (24/44.1 FLAC, BIS/eclassical), and found the brass and timpani accents to pop cleanly and effortlessly. Though I got the best results when I drove the P7s with my Grace Design m902 headphone amplifier, the B&Ws also gave a lively, engaging performance when plugged directly into an iPod Touch.

Returning to tonal balance, the P7s had a slight emphasis in the treble that brought out the sparkle in Chilly Gonzales’s piano intro to “Within” on Random Access Memories, imparted a distinctly metallic sound to the cymbals, and made the wind chimes shimmer. The opening of “Beyond,” from the same album, evinced the P7s’ preference for the violin section over the rest of the orchestra, but stopped short of sounding strident. Their reproduction of Valery Gergiev and the London Symphony Orchestra’s recording of Mahler’s Symphony No.5 (24/48 FLAC, LSO Live/Society of Sound) also brought out more of the violins’ upper harmonics and the trumpets’ brassiness than was strictly neutral, but without sounding off-puttingly bright. 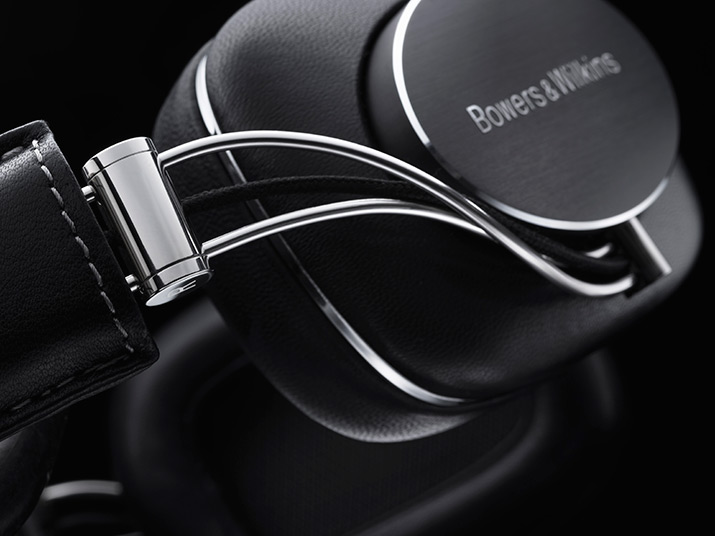 The 1990 edition of Sade’s Diamond Life (CD, Portrait RK 39581), and “Rolling in the Deep,” from Adele’s 21 (16/44.1 FLAC, XL), have become my standard tests for how a component handles, respectively, a biting early-digital transfer from analog tape and a highly compressed modern production. The price for the P7s’ crisp high end and abundant detail is that the defects in these recordings were readily apparent. Compression artifacts in recordings streamed from Pandora were also evident, though never offensive. If you’re looking for a pair of headphones that will cover up flaws in recordings, the P7s are not the ideal choice.

I recently reviewed Focal’s Spirit Classics, which at $399 are priced within a dollar of the P7s. I thought the Focals were nice looking and well built, but the B&Ws’ design is sleeker, and their fit and finish -- from the real leather to the shiny stainless steel -- is just a cut above. Some users will appreciate the P7s’ larger earcups, but the softer protein leather of the Spirit Classics, along with their ability to pivot from front to back, might make the comfort question a wash. Though the B&Ws include a second cable without microphone or remote, it’s still only 4’ long; the Focals’ straight cable is a more home-friendly 10’.

The Spirit Classics’ tonal balance leans a little to the warm side of neutral in contrast to the P7s’ livelier character. Voices through both headphones were very natural, with the Spirit Classics slightly emphasizing the fundamental tones, the P7s focusing a bit more on diction. The Focals’ high frequencies do a creditable job of rendering the timbres of most instruments, but cymbals came across with more fuzz than metallic sizzle. On the other hand, the Spirit Classics’ relaxed treble was more forgiving of bright or otherwise dodgy recordings than was the P7s’.

Both headphones had impressive bass response. The Spirit Classics are more linear, whereas the P7s had the aforementioned 50-60Hz hump. While the Focals are satisfying in pumping out the kick drum in “Lose Yourself to Dance,” their sound isn’t quite as tight and physical as the B&Ws’. Both headphones handled macrodynamic contrasts with aplomb, but the P7s’ bass slam made them seem the more energetic transducers when big bass drums were involved.

Although both models are closed-back headphones, the P7s produced a somewhat more open sound than the Spirit Classics, with tighter focus of, and more space between, individual sonic elements from left to right across the soundstage. The Focals, however, are a little bit better at preserving depth and three-dimensionality. For example, with a 24/96 rip of the Audio Fidelity vinyl reissue of Diamond Life, the Spirit Classics place Sade Adu’s voice far back in the soundstage in “Smooth Operator,” and much closer in “When Am I Going to Make a Living.” The P7s didn’t draw as much of a distinction.

The P7 headphones are another well-thought-out design by team B&W. They’re fashionable in a mature way, with high-quality materials and meticulous attention to detail. And there is substance to go along with the style. The P7s’ bass delves deep, sounds full, and punches hard. They have explosive dynamics when called for, but also reproduce small details with exceptional clarity. Their slightly forward treble occasionally shows up poor recordings, but sounds crisp and clean with better ones. The P7s sound great out of an iPod, but also reward the use of higher-quality ancillaries. Lastly, they’re lightweight and comfortable enough to be taken anywhere and worn for hours at a time. That combination of features puts them among the leaders in their class.