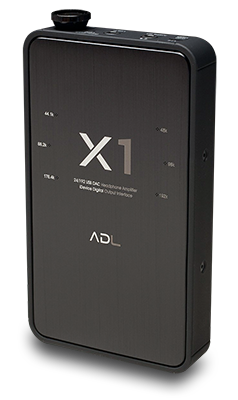 Furutech, a Japanese maker of audio accessories, has been on a tear lately through its Alpha Design Labs (ADL) brand. When I reviewed their Esprit USB DAC, in April 2013, I found it a great-sounding, versatile addition to a small home system. To supplement its home-audio USB DACs, ADL has also introduced a series of portable DACs and a pair of headphones. The subject of this review, the X1, is the smallest and newest DAC-headphone amp of the three in ADL’s line. At $479 USD, the X1 packs some high-end technology into its diminutive case.

The ADL X1 is designed primarily for use with Apple devices -- not coincidentally, at 4.6”L x 2.7”W, it’s close to the size of an iPhone or iPod Touch. You could easily place it under an iPhone and bind them together with a couple of rubber bands. The X1 has a clean, classy appearance: brushed-aluminum face, rounded corners, and inset switches. The X1’s sides are finished in a rubbery material -- it won’t easily slip out of your hands. The only odd feature is the rotary volume control at the right of the faceplate -- the other switches can’t be inadvertently bumped, but the volume control, which doubles as an on/off switch, is vulnerable.

Also on the front panel, to the left of the volume control, are a 3.5mm analog line input, a 3.5mm headphone output, and a switch labeled GND/TRRS. This switch is to match different headphone types: TRRS is for Apple or other headphones whose leads have four conductors. The fourth conductor is often a microphone input, as on iPhone headphones, but these connectors are also found on 3.5mm balanced headphone connectors. Between the volume control and the analog line input is a tiny LED: It glows red when the X1’s battery is charging, green for fully charged, and orange for low charge.

On the rear panel are three connector jacks: USB Mini-B, for charging the X1 or connecting to a Mac or PC; USB Type A, for connecting an iDevice using an Apple MFI Certification USB cable; and 3.5mm, for a second set of headphones, an analog output, or an optical output. This connector could be used to connect to your home audio system with a 3.5mm-to-dual-RCA cable in the analog domain, or digitally using a 3.5mm-to-TosLink cable. All of these connectors are of high quality and gold plated. On the bottom is a recessed switch for switching between the USB Mini-B and Type A sockets, depending on if you’re using a PC or iDevice.

On the top panel is the X1’s coolest feature: six LEDs that tell you at a glance the sampling rate of the audio signal received: 44.1, 48, 88.2, 96, 176.4, and 192kHz. These represent all of the popular native digital-audio sampling rates in use today. This is great to have when you’re playing with sample rates on your computer -- you can know immediately if you’re getting the proper sampling-rate output.

The ADL X1 uses the highly regarded ESS ES-9023 Sabre DAC, which is compatible with 24-bit/192kHz PCM audio signals. ESS DACs are well known for their high signal/noise ratios and low jitter, and the ES-9023 carries on this high standard at an economical price. ESS claims a dynamic range of 112dB for this chip -- the widest at the price, they say. On the USB side, the X1 operates asynchronously.

The ADL X1 is compatible with iDevices, Macs, and PCs. I also had on hand an Android tablet -- an Acer A1-810 with Android 4.1 installed -- as well as a USB OTG cable to connect the tablet to the X1. This done, I tried various programs to get this combination to work, but no luck. The best I could do was 24/192 PCM, but at half speed -- amusing, but not what I wanted. ADL told me that the X1 is incompatible with Android, but in January, at the 2014 Consumer Electronics Show, they introduced a version that is compatible.

The ADL X1’s battery is charged through its USB port; as recommended by ADL, I charged the review sample for some seven hours. One nice feature is that, when in use, the X1 doesn’t draw power from the USB port. ADL says that a battery charge should last about seven hours, which I found pretty accurate.

The rest of my family lives entirely in the Apple universe, so I had my son’s iPod Touch to use, as well as my wife’s Mac. However, I used the X1 mostly with my Acer Windows 7 laptop, as I’m most familiar with Windows’ sound controls. I used JRiver Media Center 17 for most of my listening, with foobar2000 for comparison. Sound flows from Media Center 17, through the USB port, and out to the X1 in various ways, the most rudimentary of which are to set the PC’s output to Direct Sound or WaveOut. Because the signal then goes through the Windows mixer, if you stream a 24/192 track, the X1 won’t necessarily receive that high resolution. Kernel streaming, WASAPI, and ASIO are hardware direct, so Media Center 17’s output will be determined by the X1. Since the X1 has its own ASIO driver (not all devices do), I installed it and used it for most of my listening. This ensured that I could stream music natively from JRiver to the ADL.

ADL also sent along their superb H118 headphones, which I used for most of my listening. These over-the-ear, closed-back ’phones have good isolation and fold into a relatively compact carrying case. The stock 10’ cord is removable, and ADL also supplied a higher-quality Furutech cable only 6.5’ long. To my ears, the two cables sounded the same. Since each has three conductors, I set the X1’s switch to GND.

One of the first tests I like to do when reviewing a DAC is to compare 16/44.1 signals with those of higher resolution and see if I hear a difference. In this case, I compared a rip of Norah Jones’s Come Away With Me (16-bit/44.1kHz FLAC, Blue Note) with a hi-rez download (24/192 FLAC, Blue Note/HDtracks). Boy, did I hear a difference! In the 16/44.1 version of the title track, Lee Alexander’s bass sounded distorted, the decay of sound when Jones strikes the piano keys had a coarser texture, and overall, the piano sounded grittier. In comparison, the 24/192 version sounded very smooth through the X1. The smoothness didn’t hide detail, and it was easy to delineate Alexander’s individual plucking of his bass’s strings. The X1 sounded so smooth that I thought there might be a tube in the amplifier stage.

Playing around with Media Center’s output, I noticed that WaveOut reduced the native resolution of my audio tracks to 16/44.1, and thought it would be interesting to hear the difference between the Windows-altered output compared to hardware direct. I used Head-Fi and HDtracks’ Open Your Ears (24/96 FLAC, HDtracks), a sampler of well-recorded music by various artists. I particularly like the Persuasions, an a cappella group, singing “Stuck in a Moment You Can’t Get Out Of.” The track begins with one singer in the left channel, and the sound gradually spans the stage as the other singers join in. I played the beginning over and over, switching between JRiver’s WaveOut and ASIO. Unquestionably, the 24/96 output sounded much better. Downsampled, the voices sounded rougher, and I heard some distortion when the other singers joined the soloist. With the straight 24/96 output I could hear more detail, such as the singers inhaling before entering. In other words, with the highest-resolution recordings unaltered, the ADL X1 took me closer to the live performance. 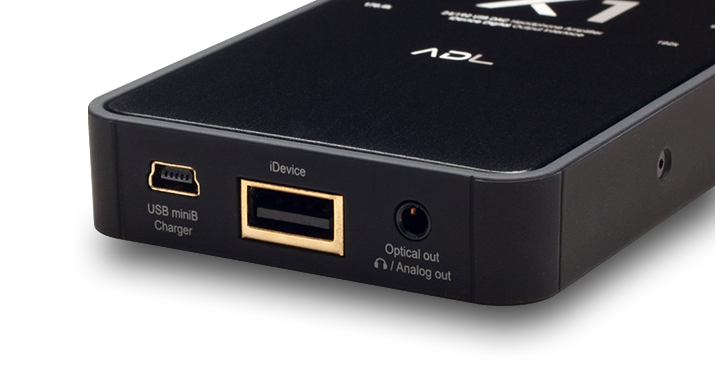 After hearing how lousy 16/44.1 can sound, I began to get concerned that the ADL X1 was incapable of sounding good with lower-resolution music. However, when I played “Temple Caves,” from Mickey Hart’s Planet Drum (16/44.1 FLAC, Shout Factory), using the ASIO driver, the ADL X1 shone, pumping out the deepest bass notes tightly through the H118 headphones at satisfying levels. And when I played this track loud, the deepest thumps really pressurized my ears. The lesson: the X1 sounded phenomenal with well-recorded music, and revealed any flaws in crappy recordings.

Other parameters that make a good headphone amp are a low noise floor and the ability to drive difficult loads to high levels. I heard no hiss when I cranked up the X1’s volume control, a sign of a superb design -- this headphone amp got out of the way of the music. As for driving difficult loads, none of my ’phones -- the H118s, Grado SR100s, and Creative Labs Aurvana in-ear monitors -- fit that description. What I can say is that with the H118, the X1’s volume control was barely at the one-quarter mark when I listened at high levels in a quiet room; I feel confident that almost any reasonable headphone will be loud enough in a noisy environment such as a bus or train. 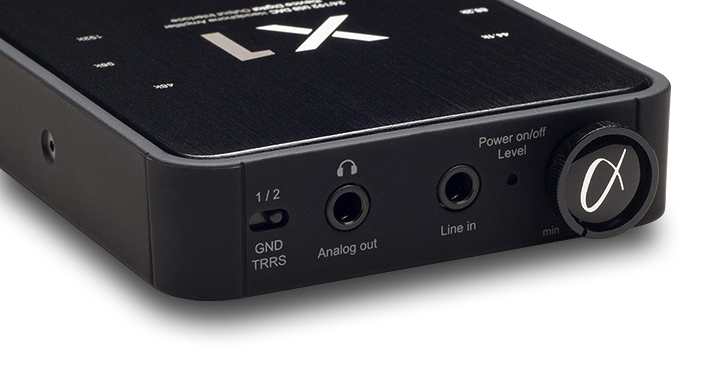 Using the ADL X1 with my eight-year-old son’s iPod Touch, I had to make do with MP3s -- he has no hi-rez music. Fortunately, his taste is varied, and I found a couple of John Williams tracks, including “Theme from Jurassic Park” (16/44.1 MP3, MCA). With this track, the dynamic range seemed compressed and the soundstage less expansive, but the overall sound quality was much better than I’d thought it would be. Compared to the iPod headphone connection, the tube-like smoothness of the X1 tamed the gritty highs of the strings. Overall, the X1 offered a nice enhancement and is a worthwhile upgrade, even if your thing is MP3s.

The list of portable USB DAC-headphone amps that can natively play 24/192 files is pretty short. The FiiO E17 Alpen ($139.99) comes close, but can accept 24/192 only through its S/PDIF interface -- its USB connection is restricted to 24/96. I had on hand only the NuForce uDAC-2 ($129), with 24/96 native resolution. The uDAC-2 is geared toward a different use: to enhance the headphone outputs of personal computers, which usually sound awful. The NuForce can’t connect to iDevices, and its USB jack is the square Type B rather than the Mini-B. It’s also powered through the USB connection and, unlike the ADL X1, lacks its own battery. In its favor, the NuForce has standard analog outputs and a coax digital out, for easier connection to your home audio system than the ADL X1.

It’s a bit unfair to directly compare these two DAC-headphone amps: the ADL X1 is the clear winner on the basis of versatility, while the NuForce uDAC-2 wins on the basis of price. However, the competition gets interesting when each is used as a headphone amp in conjunction with a computer. That’s how I really like using the NuForce uDAC-2 -- on an airplane with my laptop, playing movies or music. In that context, the uDAC-2 is in its element and sounds great. The ADL X1 sounds even better. When I played Mark Knopfler’s Kill to Get Crimson (16/44.1 FLAC, Warner Bros.), his guitar sounded too smooth through the NuForce -- the ADL X1 retained a lot more detail.

Although other portable USB DAC-headphone amps work well with Apple devices, the ADL by Furutech X1 is a unique device that adds 24/192 capability via USB. It sounded splendid at all resolutions, and with every device that I connected it to. At $479, the X1 is pricey -- but you get a versatile, classy-looking device with exceptional sound quality to match its good looks.