Boston Acoustics is known for making good-sounding speakers, and the MC100 Blue Bluetooth speaker ($149 USD) follows in that tradition. For better Bluetooth sound, it supports NFC pairing and the aptX codec, though it’s not, as its box proclaims, a “wireless Bluetooth speaker” -- it must be plugged into AC to function. That’s about the only nit I have to pick with Boston Acoustics, who are not alone in confusing this issue. We need to adopt language in which Bluetooth means the wireless connectivity of that proprietary audio-signal format, and wireless means a battery-powered product that can be used without being tethered to a wall socket.

That said, the MC100 Blue produces a quality of sound you wouldn’t expect from such a small device, and it looks stunning.

The MC100 Blue measures 15.75”W x 6”H x 5.25”D, and is made of the high-gloss black plastic that’s so popular these days. No controls mar its front panel -- a grille takes up almost the entire surface, except for a narrow strip along the bottom on which is neatly embossed the Boston Acoustics logo. The underside of the base is lined with rubber, to keep the MC100 from bouncing around when played loudly. The design is sleek and sexy -- the speaker is tilted back on its base to correctly address the listener’s ears.

On the top of the MC100 Blue is a row of six buttons: Power, Bluetooth pairing, Auxiliary, Mute, and Volume Up/Down. On the right side are the auxiliary input and a headphone output, both on 3.5mm jacks. On the rear are a power input, a covered mini-USB port, a reset button, and two keyhole openings for hanging the MC100 on a wall. Otherwise, no handles or indents mark the MC100 as a portable speaker. At 4.5 pounds, it’s easily picked up at the base and tucked under the arm for carrying. But since it must be plugged into the wall, I don’t think it can be considered a fully “portable” speaker.

Behind the MC100 Blue’s grille are two 3.5” “full-range” drivers. Boston Acoustics claims a frequency response of 70Hz-20kHz, but says nothing about rolloff.

The bubble-membrane remote control is a wafer 3.25”L x 1.25”W x only 3/8” thick. I’m always afraid I’ll lose something so small, but it will be handy if you decide to mount the MC100 Blue on the wall, which will render its controls less accessible. All of those controls are on the remote, as well as Play/Pause, Stop, and Skip Forward/Back, for sending commands to your music device. Also provided are an AC cord with power supply, adapters for plugging in to different electrical systems (US and EU), a quick-start guide, and a multilingual instruction manual.

I can think of few Bluetooth speakers that are easier to set up than the MC100 Blue. The power button atop the speaker glows blue when the MC100 is turned on, red when set to standby. In fact, Standby is the only position for any button that doesn’t glow blue. None of my devices has NFC. If yours does, just lay it atop the MC100 and you have instant pairing. Boston Acoustics pinpoints the docking spot for you on the transparent packing tape.

But pairing without the help of NFC was also simple and efficient. Once I’d paired my iPod Touch, I quickly ran a test of the MC100’s other controls; all did just what was expected of them. When you use the volume controls, a blue bar is displayed behind the grille; you can see how many notches you prefer for a particular type of music. Bluetooth connectivity was very good. I could roam anywhere in my house with my iPod Touch without a single dropout -- the music just kept playing, smooth and sure. In this regard, the MC100 is unique among the Bluetooth devices I’ve tested.

The remote control worked well with my iPod Touch, though there was a second or two of latency with the Play/Pause and Skip Forward/Back functions. When a command sent by the remote control is received by the MC100, the latter’s blue pairing light and a single bar behind its grille flash rapidly two or three times. The commands were instantaneous using the iPod Touch, so I ended up using that instead of the remote, cool as the MC100’s light show was. I didn’t mount it on the wall, but the MC100 fit with my décor just about anywhere I had room for it.

The MC100 Blue is designed to work with aptX, a streaming codec that gets the best results from Bluetooth technology. My iPod Touch doesn’t have that, but still sounded plenty good. The MC100 turned out to have very balanced sound at upper-mid volumes, so I set the Touch to flat response -- no EQ. The bass was amazing for such a small speaker, with a smooth midrange and a slightly bright top that could become a bit brittle with some recordings -- but only a very few. I can probably blame the recording more than the MC100.

The MC100 is one of the few Bluetooth speakers to provide real stereo sound, and the effect was good at both close range and farther away. And it could play loud -- I could turn it up enough to drive me out of my office, with a few notches still left to go -- with little distortion. This was achieved with Boston Acoustics’ BassTrac system, which seems to reduce bass at higher volume levels, to prevent damage to the speaker. Most of my listening was done at about 80% of the MC100’s maximum volume level, all to CD-quality Apple Lossless files stored on my iPod Touch.

I played my standard benchmark recording, Chabrier’s España, with Ataúlfo Argenta conducting the London Symphony (16-bit/44.1kHz ALAC, Decca). It has wonderful presence, and the delicate interplay of harp, timpani, and tambourine about 44 seconds in was absolutely, irresistibly delicious. To be sure, the famous bass-drum thuds near the end weren’t what you’d hear and feel from a subwoofer or full-range floorstander, but they were at least present through the MC100. Not so for many of the smaller Bluetooth speakers I’ve evaluated. 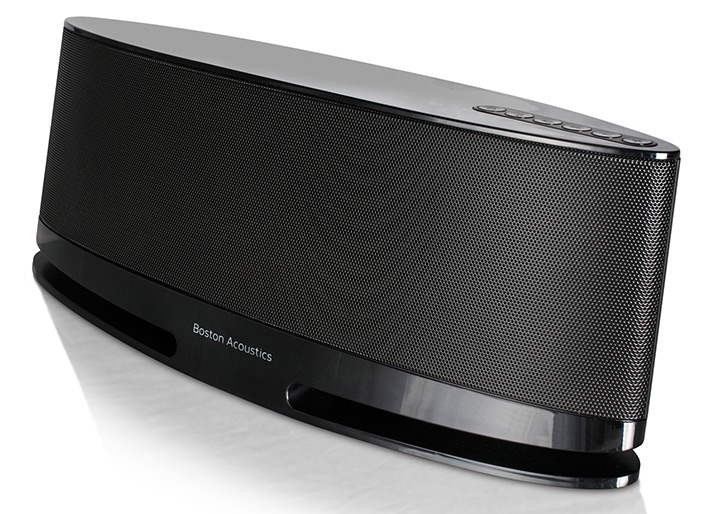 The last movement of Shostakovich’s Symphony No.5, as performed by the New York Philharmonic led by Leonard Bernstein -- his original 1959 recording (16/44.1 ALAC, Sony Classical), not the more tepid 1979 version -- had the same ear-popping presence as the Chabrier. The overall effect was nearly savage, the strings having awesome bite.

“Song for the Dumped,” from Ben Folds Live (16/44.1 ALAC, Epic), must be one of most graphically angry breakup songs ever written, and the MC100 Blue took to it like a duck to water. The raucous playing of this keyboard-based band is capped by repeated struck cymbal work that was clean as could be through the MC100. “Bedroom Toys,” from Duran Duran’s Astronaut (16/44.1 ALAC, Columbia), was crisp and clean as a winter morning.

Peggy Lee’s nuanced singing of “Fever,” from her live album Basin Street East (16/44.1 ALAC, Capitol), was cleanly reproduced, as were the punchy double bass and drum accents that drive this performance. “Take Five,” from the Dave Brubeck Quartet’s Time Out, has very wide separation, beginning with Joe Morello’s drums in the left channel and Brubeck’s piano in the right -- both were clean and clear through the MC100 Blue. Then Paul Desmond’s alto sax enters at the center, while the rhythm already set up by piano, bass, and drums continued with the same clarity.

I could find no type of music that the MC100 Blue didn’t do pretty full justice. This little speaker with the big sound sounded exciting with anything from solo guitar to opera to rock.

Boston Acoustics’ MC100 Blue is an excellent Bluetooth speaker -- among the finest I’ve heard. It looks sleek and modern, and sounds good with any type of music. It’s a remarkable value for $149, and one of the bigger bargains of this past holiday season.