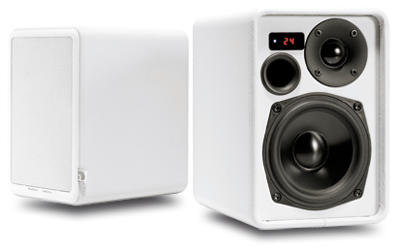 A few years ago, a friend’s 16-year-old son would sit on the couch with his laptop and play songs from his iTunes library through the machine’s minuscule speakers, even though his mother’s better-than-respectable stereo was only three feet away. Occasionally he would play something snatched out of the air through his iPhone’s speaker. We all hailed the return of the transistor radio, and laughed.

Swedish company Audio Pro has been making audiophile equipment, mainly loudspeakers, since 1978, and the Living LV2e is one in their line of remote-controlled, “wireless” powered loudspeaker systems (scare quotes explained below). The desktop speakers, with remote control and USB dongle, retail for $1000 USD per pair. Each speaker measures 8.2”H x 5.7”W x 7”D, and has a 1” soft-dome tweeter and a 4.5” aluminum woofer. Bass-reflex in design, each speaker has a front port, and has a standard electrical cord and plug to power its two 25W class-D amplifiers.

The LV2e’s come clad in stitched leather in black, red, or white, and are lovely to the touch. The lightly magnetized grilles press gently but securely into the cabinet’s frame, and are easily removable. I thought the little tag on each grille (you can tuck it in) made the speakers look chintzier than they are, and the sound was slightly but noticeably less bright with the grilles in place, so I left them off. Behind the grille is a red LED volume meter with a range of 0 to 31.

Around back, no binding posts -- just the electrical socket, a power switch, and two buttons: one for programming a house code and one for the zone. Today’s wireless speaker systems are sophisticated creations, freed from the interference and limited range of past wireless designs. Audio Pro focuses on computer-based audio, and the operation and setup of the transmitter, remote control, and the speakers themselves couldn’t be easier or more intuitive.

The speakers are certainly compact. They seemed a bit small for my 28” Target stands, but could be a bit large for a desktop, if your goal is anything other than listening in the extreme nearfield. This could be my bias, however; as the main system in my room, the LV2e’s were consistently able to play music with enough volume and authority.

In fact, setting up the Audio Pros was so simple that at first I wasn’t sure what to do. If you play vinyl, I can’t imagine hooking these up to a phono preamp. I still have a standalone CD player, but it outputs a fixed-level signal via RCA jacks, and the LV2e is decidedly computer oriented. I don’t do much listening through my laptop, and I gave up on desktops about the time that teenager was torturing us with his iPhone. My music is on my 160GB iPod Classic, mostly CDs ripped as lossless files. I think that, day by day, more and more listeners are streaming music from services like Pandora and Spotify; for them, true “wirelessness” means being able to send music directly from their phones to a speaker system. Alternatively, iPad streamers could send their signal to Apple’s AirPort Express, which could then be connected to the USB dongle. But that requires more money and more complexity. For now, most mobile listeners are like me: having to connect to the system’s transmitter through a stereo mini cable plugged into my portable device’s headphone socket.

So I took the plug from my no-name USB charger, plugged the LV2e dongle into that (the transmitter has a built-in Burr-Brown analog-to-digital converter), and plugged them both into a wall outlet in the kitchen. This would be where my music server lived, even though the speakers spent most of their time in the living room, and occasionally accompanied me into the bedroom. 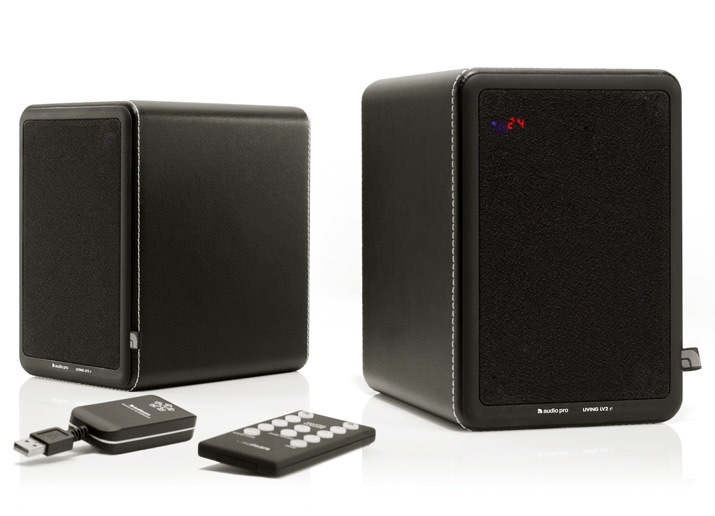 I left my usual system right where it was, with the LV2e’s next to my main speakers. In the months I had the Living system in my room, I barely turned on my NAD C 325BEE integrated amplifier or used my beloved Axiom M22 stand-mount speakers. The Audio Pros were simply too convenient, and sounded too good, for me not to enter my apartment and immediately plug my iPod into the mini cable attached to the USB transmitter, to pick up my music right where I’d left off on my way home. The speakers detect when a source has been made available to them, their power lights changing from red (off) to blue (on), and they’re ready to receive. However, the speakers consistently came on a few seconds into the first track. After a certain period of inactivity, the speakers turn themselves off.

I left the speakers’ volume at about “23” (even at their peak they never got too loud), and used my iPod’s volume control to fine-tune the level (usually a few pegs down from maximum). Setting neither component to its limit prevented paint-peeling mistakes through the speakers, as well as deafening ones through my earphones.

For a pair of speakers sized somewhere between run-of-the-mill computer add-ons and entry-level bookshelf models, the Living LV2e’s had the clarity, harmony, and textural purity of speakers of much bigger size and ambition. “Picture in a Frame,” from Tom Waits’s Mule Variations (16-bit/44.1kHz ALAC, Anti-), was present in the room, its bass attack audible and resonant, Waits’s voice separate from his piano, the latter’s pedals and keys clicking to make the music-making palpable.

Buddy and Julie Miller’s duet on “Take Me Back,” from Julie’s Blue Pony (16/44.1 ALAC, Hightone), opens with the scintillating treble of a fiddle, soon to be joined by the fast, weighty thump of the kick drum, their voices melding beautifully and naturally in the midrange. The Audio Pros handled these frequency bands in a balanced, communicative style. On “Perfect Fit,” from Van Morrison’s Days Like This (16/44.1 ALAC, Polydor), the harmonica was smooth and graceful on the top end, the horns kicking in just below, the guitars chopping on either side, spreading the soundstage across the room. The separation of Morrison’s voice from that of his backing singer and the instruments was airy and delicate and quite detailed.

For a heavier experience, “Game Face,” from Gov’t Mule’s live Deepest End (16/44.1 ALAC, ATO), packed a fairly good wallop, the sound of the recording venue booming from the drums and ominous electric bass. Warren Haynes’s guitar stung above the low-end murk without the sound verging on syrupy or smeared. For the rousing conclusion, the LV2e’s conveyed all the macrodynamics of Matt Abts’ double-time kick drum and crashing cymbals. A smallish but adequately self-powered speaker is a creative solution for preserving sound quality when space has already been sacrificed. 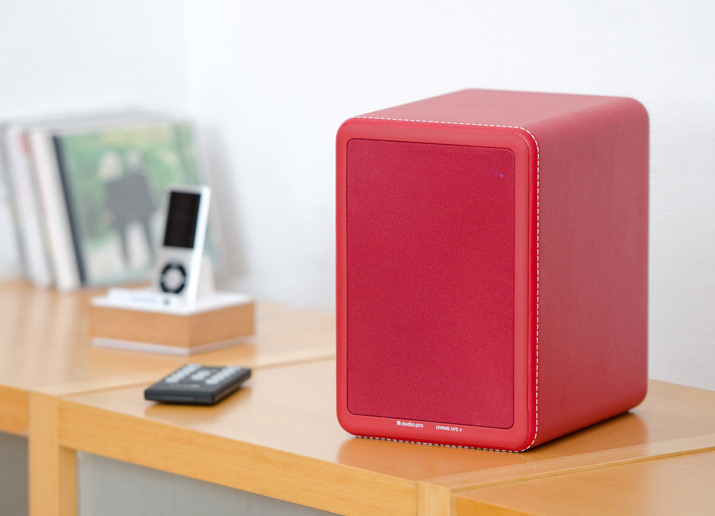 All speaker designs have to contend with bass extension, and the sad truth seems to be that speakers lacking in bass weight don’t catch on with the public. To its credit, the Audio Pro system gave bass players their due -- the LV2e’s ability to reproduce deep tones could be startling. Fernando Saunders’ fretless bass dominates “Rock Minuet,” from Lou Reed’s Ecstasy (16/44.1 ALAC, Reprise). The Audio Pros produced this instrument with more authority than their size would indicate they could. Nor did they abandon the high end; Reed’s guitar buzzed, his voice was clearly articulated, and the drums tapped behind. On the other hand, “We Gotta Have Peace,” from Curtis Mayfield’s Roots (16/44.1 ALAC, Rhino), is dominated by the shimmer of a tambourine, but the bass line was easy to follow without being overbearing. The LV2e’s seemed to find the right balance among whatever elements a recording fed them.

The lo-fi “Black-Eyed Susan,” from Paul Westerberg’s 14 Songs (16/44.1 ALAC, Sire), didn’t give the Audio Pros much to work with. Westerberg’s voice was intimate and close, the drum machine distant and remote, the guitar muffled yet tying the song together. Still, it was listenable. On a hi-fi recording such as “One,” from Johnny Cash’s American III (16/44.1 ALAC, American), the acoustic guitars leapt into the room, and the LV2e’s conveyed Cash’s implicit desperation and authentic world-weariness, and put him right in the center of the listening room. Those qualities infuse Solomon Burke’s performance of the title track of Don’t Give Up on Me (16/44.1 ALAC, Fat Possum), but the backing band sounds warmer, the organ fills mellow, the beat languid and almost leaden. Track after track, the LV2e’s put the emphasis in precisely the correct spot.

Just before the Audio Pros arrived, I had the great pleasure of reviewing Dynaudio’s wireless Xeo system ($2300/pair, including transmitter and remote). That rig, at more than twice the Audio Pros’ price, is designed to serve as a home’s primary audio system. The transmitter box accepts conventional analog and digital component inputs, whereas the LV2e’s work only with a stereo mini-cable.

Both sounded great, but one of the Xeo’s subtleties that I most appreciated was its seeming ability to adjust to the optimal sound level for a given track. Perhaps it’s the Xeo’s 50W amps, but the LV2e’s could sound small when they needed to sound large. For example, I bought the download of The Who at Kilburn DVD from the iTunes store to play on my iPod. It’s of suspect quality, maybe, but I wanted to carry that music with me, and it works. Played through the LV2e’s, the sound was . . . lessened in scale. I turned the iPod’s volume all the way up and adjusted the volume on the speakers, even cranking them to their limit. I wasn’t blown away, which was always Pete and the boys’ intention.

The LV2e’s comprise a marvelous and impressive plug-and-play system. I can even imagine putting them in a bag, packing them in a car, and taking them on vacation. But their size prevents them from attaining reasonable heights in overall slam and visceral impact when pushed to their limits with large-scale music.

I’m going to miss the Audio Pro Living LV2e system. It’s easy to get used to the combination of convenience and high-quality sound, and this setup offers that combo in spades. Although they need to be near wall outlets, the speakers are otherwise wireless, which affords a freedom in placement well beyond what you’re tethered to when dealing with speaker cable. They can be pointed and placed every which way, and their technology suggests that their numbers can be multiplied throughout your dwelling by virtue of the remote’s readiness to control zones from a central location.

For speakers so small, the LV2e’s had wonderful resolution and exceptional transparency, while establishing a soundstage of impressive depth and dimension. They’re fast, delicate, and detailed, and their two-way design coherently integrates the bass, treble, and midrange. Begging for use beyond the desktop, they can easily fill a modest-size room with full, rich sound. If your lifestyle demands mobility, compactness, and versatility in accoutrements, the Audio Pro Living LV2e system may be the only wireless system you’ll ever need.