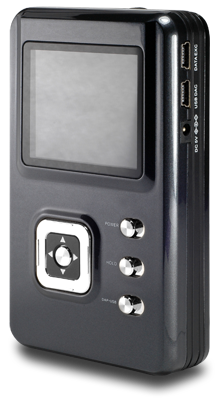 It’s well known that Apple’s iPod music player redefined how the world listens to music. Its sleek, stylish design and capacious storage (160GB on the iPod Classic) let you take your music collection with you anywhere: on the bus, in an airplane, to the gym -- wherever you go, your iPod goes. You can pick your preferred trade-off between sound quality (up to 16-bit/48kHz WAV or AIFF files) and storage capacity (8 to 320kbps compressed MP3 or AAC files). Much to audiophiles’ disappointment, the general public often prefers low-resolution compressed files to higher-rez WAV and AIFF files.

But suppose someone wanted to build an audiophile version of the iPod -- one that would play hi-rez computer-audio files, and had a decent headphone amplifier to boot? A few years ago, a company called HiFiMAN did just that. Their HM-801 portable audio player ($790 USD) plays files up to 24/96 (though not 24/88.2), and has a built-in headphone amp that uses the Burr-Brown OPA627 chip, prized by builders of standalone headphone amps. It would seem to be just what audiophiles want.

But no matter how good the HM-801 sounds (it’s still available), $790 is a lot of money, so HiFiMAN has released some less expensive portables: first the HM-602 ($399), with a few compromises; and now the subject of this review, the HiFiMAN Express HM-601 ($249), with a few more compromises, but a price that’s squarely in iPod territory.

What do you get for your $249? First, you get the Philips TDA1543 D/A chip, which is highly respected for its sound. The HM-601’s built-in headphone amp will drive low- or medium-impedance headphones to an output level of 1.1V (30mW) at 32 ohms, or 2.2V (26mW) at 150 ohms. The 7-ounce (200gm) HM-601 measures 2.4” by 4.05” by 1.04” (62mm by 103mm by 26.5mm). That’s much thicker than an iPod, but it slips easily into a shirt pocket. The HM-601’s 8GB of built-in flash memory can be supplemented by removable SDHC cards (such as those used in many digital cameras) with capacities of up to 64GB. In other words, unlike with the iPod, whose memory is all internal, with the HM-601 you never actually run out of storage space. The rechargeable battery can play for nine to ten hours. The battery takes several hours to recharge, much longer than an iPod’s. There’s a headphone jack, a USB data-exchange port, and a slot for the SDHC card.

The HM-601’s user interface consists of a color screen (1 9/16”W x 1 1/4”H), with a square dial that lets you scroll through musical selections and setup menus. The interface is similar but not identical to that of the iPod Classic -- the one with the wheel control. The iPod Touch models running iTunes are much spiffier, though the HM-601 seems to display more information about the music playing than does the Touch -- but no album-cover art. The analog volume control is a wheel on the top of the player, and there’s a Low Gain/High Gain switch on the left side, by the SDHC slot. Most of the headphones and earphones I tried worked better with this switch set to High Gain.

To the right of the dial are three silver buttons. These turn the HM-601 on and off, lock the local menu, and switch the equalization on and off. The controls were simple to learn and use. The small Chinese/English manual is adequate, though I had trouble understanding the descriptions of a few of the functions.

The HM-601 is black. It comes with a USB cable and a battery charger. When the HM-601 is connected to a computer via USB, music can be copied to the player, and its battery will be recharged, just like an iPod’s. The separate charger does this faster, though even it is hardly fast. A black velvet carrying pouch is included. 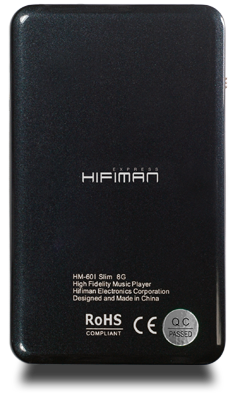 I augmented the HM-601’s internal memory with a 16GB SDHC card designed for a camera. To insert the card, just pop it into the slot on the left side of the HM-601; when it’s fully inserted, it will stay in the slot until you’re ready to remove it. Then you just press it again, and spring loading pops it out for you to grasp. While the notion of using SDHC cards to store large numbers of music files seems attractive, it struck me that after you accumulate several cards, it could be a challenge to identify which files each card contains. For me, at least, just keeping track of the cards would be difficult -- they’re tiny and easy to lose. When you replace the SDHC card, or copy new music to the HM-601, you select Update Media File on the main menu; the HM-601 then rereads the card and displays the contents on the menu.

As soon as I plugged the HM-601’s transfer cable into a USB port on my computer, the HiFiMAN automatically switched to its USB Data Exchange mode, with which I could view my computer’s contents as if the HM-601 were an external drive. Actually, it was like two drives: one for the HM-601’s internal memory, and one for its SDHC card. I used Windows’ file-copy features to copy several albums’ worth of WAV and FLAC files to the HM-601’s memory. I’m a Windows guy, and I found it far easier to manage, load, find, and erase music files on the HM-601 than on my iPod. Experienced Apple users will probably disagree.

Because the HM-601 is a portable player, I’d planned to use Sony’s MDR-EX86LP earphones for most of my critical listening. I use the Sonys with my iPod -- not because they’re super-hi-fi, but because 1) the iPod drives them easily, so an external amplifier isn’t needed; 2) they have enough bass to sound satisfying, something many earphones lack; and 3) like most earphones (aka in-ear monitors, or IEMs), they provide substantial isolation from external sounds, which makes them great for listening in noisy environments, like airplanes. And they were fairly inexpensive -- about $50 at Best Buy. Alas, the Sonys sounded too bright with the HM-601; with my iPod, they sound just fine.

The HM-601’s literature says that it’s capable of driving full-size headphones, so I tried my AKG K701s, which normally benefit from a robust external amp. The HM-601 drove the K701s to what I thought were satisfactory listening levels, though I suspect headbangers would want to use an external amp. My iPod, too, can drive the K701s, but not quite to the volume levels the HM-601 could reach. I briefly tried Westone 4 IEMs, but since they were brand new and not yet broken in, I didn’t use them for critical listening. However, the Westones were the only ’phones I tried that benefited from the HM-601’s Low Gain setting, due to their high sensitivity (118dB). I’m quite familiar with the sound of the AKGs, and so used them for critical listening.

With their 300-ohm impedance, Sennheiser’s HD 650 headphones shouldn’t work with the HM-601, which is rated to drive a maximum impedance of 150 ohms -- but they actually sounded pretty good. The HM-601’s volume setting had to be cranked almost to the maximum, but the Sennheisers sounded detailed and open, which they don’t always. But for best performance with the Sennheisers, you’ll need an external amp.

I briefly tried HiFiMAN’s own HE-400 headphones with the HM-601. Many HiFiMAN headphones are very inefficient, and need a hefty headphone amp. Although the HE-400s are their attempt to build a more efficient headphone, they’re still only 92.5dB efficient. However, the HM-601 drove the HE-400s fairly well: There was quite a bit of dynamic headroom, even when I played loud music.

It’s hard to measure break-in time for a portable player, since a cycle of use consists of charging the battery for four to five hours, playing it for nine to ten hours, then repeating the process -- a cycle that’s interrupted by such daily activities as sleeping, eating, and working. I went through the cycle for about a month before doing any critical listening.

It’s hard to evaluate a player independently of the headphones or earphones used with them. I’d hoped an elevated high-frequency response would make the HiFiMAN HM-601 a good match for the Sony earphones I use, but the sound was brighter than I’d care to listen to over long periods. The HM-601 tended toward brightness with all headphones, but with most models it was tolerable. I could use the HM-601’s equalizer to roll off its highs, but the EQ had HF adjustments only at 3 and 6kHz, so it was chancy whether it was possible to equalize all earphones/headphones. I left the EQ off for the review, though in some cases I found I could achieve a more listenable sound with the equalizer.

The first piece I played was Set 3 of Respighi’s Ancient Airs and Dances, performed by I Musici (24/96 FLAC, Fonè/HDtracks). Although this is a DSD recording, a noticeable amount of hiss made it sound as if it had an analog origin (it doesn’t). The HM-601 played the file very capably. The hiss is not nearly as prominent through other systems or through speakers; apparently, the HM-601 was emphasizing it quite a bit.

Because the high frequencies seemed unnaturally emphasized with the 24/96 file, I tried a rip of the CD Praetorius: Dances from Terpsichore and More, performed by the Praetorius Consort (16/44.1 FLAC, Musical Concepts). Here, too, the highs were prominent, though not painfully so. Some earphones/headphones are rather rolled off in the highs; the HM-601 may be a good match for them.

At the other end of the audioband, better news: the bass was deep, punchy, and tight. I played organist Virgil Fox’s recording of J.S. Bach’s Prelude in D, BWV 532 (16/44.1 FLAC, Reference Recordings), and the bass shuddered as it assaulted my ears at a very respectable level. No, it wasn’t the same as hearing and feeling it through a good subwoofer, but headphones/earphones just don’t do full-body impact.

Then I played Ariel Ramirez’s Missa Criolla, with tenor José Carreras, and José Luis Ocejo conducting the Choral Society of Bilbao and other groups (16/44.1 FLAC, originally Philips 420 955-2, remastered by FIM as LIM K2HD 040). Dynamic gradations were precisely defined, and Carreras’s voice was just gorgeous. It doesn’t make much sense to try to comment on the soundstaging of anything played through earphones, but there was a nice sense of space around the musicians on this recording.

My venerable iPod Touch, now several generations old, has 32GB of internal storage. The current model of the 32GB Touch sells for $299. You can’t expand its memory, so I suspect that those with large music collections would prefer the iPod Classic, which has a 160GB internal hard drive. The Classic sells for $249, the same as the HM-601. All the music on my Touch is in WAV format -- no MP3s for me!

The first thing I noticed when I switched from the HiFiMAN HM-601 to the iPod Touch was the Apple’s reduced high-frequency level. Having duly noted that, I cued up Bach’s Prelude in D. The bass was at least as powerful through the Touch as through the HM-601, and both were excellent. When I played the Missa Criolla, the iPod’s sound seemed cleaner, indicating a lower level of distortion. I hadn’t noticed that the HM-601 produced particularly high distortion, but the iPod plainly sounded cleaner. That surprised me.

As I see and hear it, the main advantage the HiFiMAN HM-601 has over an Apple iPod is its more powerful amplifier, which lets you use a wider range of headphones. Its ability to play 24-bit/96kHz files is also nice. But the HM-601’s sound needs to be carefully matched to the headphones/earphones it will be used with to ensure a relatively flat high-frequency response. And the option of using removable SDHC memory cards makes the HM-601’s effective storage capacity, if not infinite, at least huge.

Overall, the HiFiMAN HM-601 has definite pluses that will need to be weighed carefully to determine whether it’s the right audiophile-quality portable player for you.