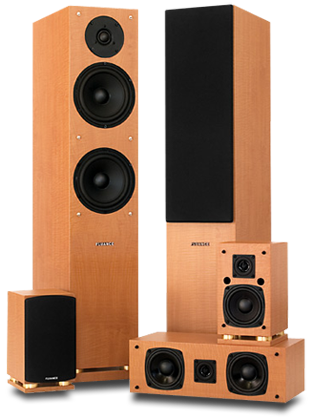 As I write this review, I’m smoking a 1926 Dunhill shell briar pipe packed with Dunhill’s London Mixture -- a lovely, mellow blend -- and I’m struck by a disconnect in cultural referents. While a new, unbroken-in pipe -- a Dunhill, say, or a Tsuge or Eltang -- is a challenging pleasure, the old, eminently smokable “estate” pipe represents a functioning connection to our cultural history. Despite its age, my 86-year-old artifact still functions as it was intended to: you can smoke a bowl of good tobacco and indulge in pleasures similar to those of any number of smokers who may have possessed this very pipe throughout its life. Indeed, when I’m worm food, someone else will revel in this little slice of history, just as I do now. Pretty cool, when you think about it.

Audio represents a very different proposition. Audio benefits from constant technical innovation -- which has advanced in massive increments, especially over the last four decades. One may appreciate an 86-year-old loudspeaker for what it was in its day, but one would certainly not expect it to render the full range of sound that today’s speakers can. Indeed, when a musician goes into a modern recording studio, he records on a sophisticated, multitrack digital console. I don’t think that musician would care for the sound quality rendered by a wax cylinder cut with a steel stylus. We can honor the innovations of the past without fooling ourselves that they can compete with the technologies of today.

Another recent technological innovation is widespread e-tailing: the marketing and selling of goods online. A number of savvy audio manufacturers are running with the best of both innovative worlds, marketing excellent products directly to the consumer via a website. As we’ve noted in earlier reviews, Aperion Audio and Yambeka Audio offer superior products at astonishing prices, and thus redefine the notion of affordable, high-quality audio.

Enter Fluance, offering their SXHTB+: a five-speaker home-theater system for $374.99 USD including shipping.

The SXHTB+ comprises two floorstanding front-channel towers, a center-channel speaker, and two surround speakers. Each is made of “audio grade” MDF, internally braced horizontally and vertically to suppress vibrations. The towers and surrounds sit on isolation platforms that effectively separate the cabinet from the floor or stand. The towers also deploy spikes to ensure complete coupling of the speaker to the floor, hardwood or carpeted. The speakers are finished in an attractive beech vinyl veneer.

The tower measures 38.8"H x 7.8"W x 13.0"D and weighs 33.45 pounds. The two-way, dual-ported bass-reflex design sports three drivers: two 6.5” poly-coated woofers, and a 1” ferrofluid-cooled, silk-dome tweeter with a neodymium magnet. Each has a pair of gold-plated, five-way binding posts that can be biamped or biwired. The ported center-channel speaker measures 15.8”W x 5.24”H x 7.9”D and weighs 9 pounds. It has two 4” midrange-woofers and a 1” tweeter in a horizontal configuration of MW-T-MW. The surround speaker measures 9.75”W x 5.25”H x 6.98”D, weighs 5.1 pounds, and has a single 4” midrange-woofer and a 1” tweeter. The center-channel and surrounds also have five-way binding posts.

The speakers come with precious little documentation -- detailed specifications and installation guidance are available from Fluance’s website. Mind you, ’net sellers have yet to divine the magic formula for offering installation guidance equal to the site’s primary purpose: sales. That said, Fluance offers fairly comprehensive guidance -- you just have to hunt for it. (Hint: Start at the FAQ page, under the Education tab.) Fluance offers both toll-free telephone and live-chat support for as long as you own the speakers.

The SXHTB+ array slid into our family room’s home-theater space almost too easily. I placed the towers to either side of our entertainment cabinet, about 6’ apart and 9’ from the central listening/viewing position. The center-channel speaker was placed atop the cabinet, canted slightly downward, supported by a used mouse pad. The surrounds sat on 29”H stands to either side of our big ol’ sectional sofa, each about 5’ from the central listening position. I tuned the ensemble using the Onkyo TX-NR808 receiver’s onboard pink-noise generator and my trusty RadioShack digital SPL meter.

After letting the Fluances play for a couple of days (Fluance recommends a mere ten hours of break-in), I did a quick test of their bass response. Bass extension down to 49Hz is claimed for the towers, and indeed they responded well to midbass information. However, deep bass challenged them. The ultimate bass note in the bridge of “Orinoco Flow,” from Enya’s Watermark (CD, Reprise 26774-2), abruptly terminated with a laconic chuff. I quickly installed my Mirage LF-100 subwoofer, retuned the system to include the sub, and the note was restored with all its depth and resolution intact. I did the balance of my listening with the sub in place.

Gustavo Dudamel’s brash, energetic conducting of the Simon Bolivar Youth Orchestra of Venezuela on Tchaikovsky & Shakespeare (CD, Deutsche Grammophone B0015296) overwhelmed the Fluance towers in stereo mode -- Tchaikovsky’s majestic themes were smooshed neatly and firmly between the speakers. The soundstage was compressed, the imaging so-so, and transparency a prayer on a wing. Once I’d switched the processing to Dolby ProLogic II Music mode using all the speakers, the Fluance ensemble embraced Dudamel’s theatrics and gave a first-class rendering of these world-class performances of the Hamlet Overture, Romeo and Juliet, and The Tempest. In the last, for example, a phalanx of brass found their place in the lower left of the soundstage and stayed put; in stereo mode, they were lost in the restricted space between the speakers. The stereo sound was not unpleasant -- far from it. But it was a small sound -- as if the music were being held captive, straining to break away from invisible tethers.

I’ve found that the gritty “Mr. Chow,” from Acoustic Alchemy’s Red Dust & Spanish Lace (CD, MCA MCAD-5816), challenges speakers on a number of levels. In stereo mode, Nick Webb’s incisive steel-string guitar sounded thin and out of body, while the signature percussion bridge, which soars through excellent speakers, cruised along at tweeter height -- not badly rendered, but not what I’m used to hearing. This time, switching to ProLogic II Music completely rearranged the recording. The guitars and drums largely stayed put, but the ambient synthesizers and ancillary percussion -- bells, a bowed saw, and something wooden struck rather savagely -- danced in and around the surrounds. Courtesy the Fluance center speaker, the bridge attained its accustomed height. The change in processing yielded better sound, but it was disorienting -- not the “Mr. Chow” I usually find so captivating. 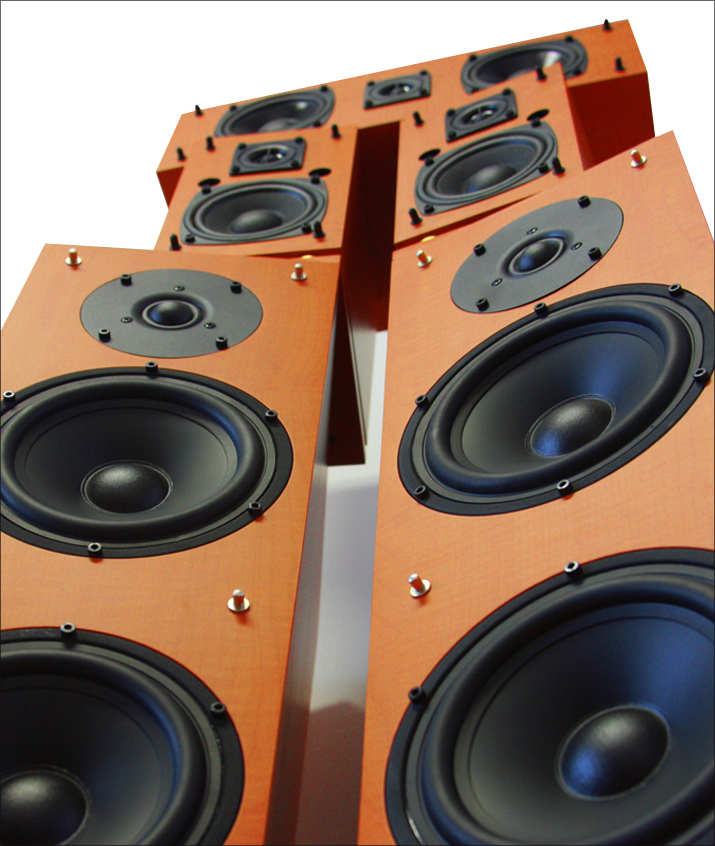 Conversely, Radio Paradise, playing via a Roku digital video player, sounded excellent in stereo, and appropriately enhanced in PLII mode. The difference may have been due to the quality of sound signal being presented to the speakers. Regardless of what you think about CDs (we’re not going there), they’re high-fidelity recordings. Radio Paradise broadcasts compressed MP3 files at various bit rates, the most common being 128kbps. MP3s simply don’t convey the complex overtones of high-fidelity music because those overtones have been cleverly edited out. The SXHTB+ towers handled the, um, cleverly edited files just fine.

It seems to me from these experiences that we’ve come to a point in speaker design at which many speakers, even those intended to be used for listening to music, are engineered for a 5.1-channel configuration, regardless of the source material. You can try to isolate them, but their performance would say to me that this is a fool’s errand. The Fluance SXHTB+s are designed to be listened to with all five speakers simultaneously engaged, and in that configuration they performed well. This perception is reinforced by the engineering of DVDs and Blu-ray Discs for not less than 5.1-channel sound -- these days, you’ll rarely find a new DVD or BD marketed with a stereo option. As you’ll see below, the Fluance ensemble performed admirably with movies.

We got a couple of new BDs in and I couldn’t wait to play them through the Fluance array. First up was Pirates of the Caribbean: On Stranger Tides, with the inimitable Johnny Depp, the scenery-chewing Geoffrey Rush, and Penélope Cruz resisting the urge to do her best Julia Roberts turn. The first thing I noticed was that the soundtrack was largely relegated to the surround speakers, as seems to be the norm these days. OK, this isn’t a big deal, until you realize that two relatively small satellite speakers will be doing a lot of the musical heavy lifting.

The SXHTB+ satellites were the bee’s knees: From delicate setups to climactic crescendos, they held their own. The rendition of ensemble sound is the true test of a 5.1 array, and the SXHTB+ nailed one scene after another. In chapter 14, the mermaids whip seaweed lashes around the legs of Blackbeard’s hapless crew. (A curiously subdued Ian McShane plays Blackbeard, who’s supposed to be evil incarnate. Evil incarnate is Lee Van Cleef in The Good, the Bad, and the Ugly; McShane’s a puppy dog in comparison.) The whips slash across the soundscape with lethal accuracy and clarity, dragging their victims back to the sea’s bottom for, er, dinner. Only a well-integrated surround-sound system could respond with the speed and seamlessness of the Fluance ensemble.

Next up was Harry Potter and the Deathly Hallows: Part 2, which carried the unenviable burden of tidily sewing up J.K. Rowling’s towering saga in a messy conflagration between an army of Death Eaters, trolls, and dementors, and a bunch of high school kids and their teachers. (And doesn’t it strike you as odd that the epic arena for world domination was an English public school?) As with all battle-laden films, one looks for subtle opportunities for a 5.1 array to convey a sense of place, time, or drama. In chapter 5, the goblin Griphook rings a pair of bells to quell a dragon guarding a Gringott’s vault -- which, of course, Harry and friends are trying to rob. The sounds of the bells waft noisily between the front and surround speakers as the camera’s perspective shifts, something you’d take for granted if you weren’t listening for it. Later, in chapter 10, Voldemort (Ralph Fiennes -- now there’s evil incarnate for you) broadcasts a message to the assembled Hogwarts students and faculty, to the effect that they give up Harry or die -- a simple, efficient message that the SXHTB+ ensemble rendered wondrously: you have no idea where the voice is coming from.

Other than a lukewarm rendering of high-fidelity sound in stereo, I found no fault with the performance of the Fluance SXHTB+ ensemble, particularly at the price. Once you resign yourself to dealing with music in Dolby ProLogic II Music mode -- and I know a lot of folks who do just that regardless of the sound source -- there’s not a whole lot these puppies can’t do. Movies and television (especially pro football or baseball broadcasts in 5.1 sound) were handled flawlessly. For $374.99 American money. $374.99. I’ve spent that much on a pipe . . . or two. The Fluance SXHTB+ system is one of the great audio bargains of this or any other millennium.

You’ll need to add a subwoofer if you want to grab the rumblin’, tumblin’, thund’rin’ of an action movie or the deep bass of an organ concerto, but when the rest of the package comes in at what must be considered audio chump change, adding a sub isn’t an issue. The Fluances are lovely to look at, sound terrific, and redefine the notion of affordable audio. And if you don’t like ’em, Fluance offers a full refund: a 30-day, no-questions-asked guarantee. But you’ll like them -- that’s my guarantee.