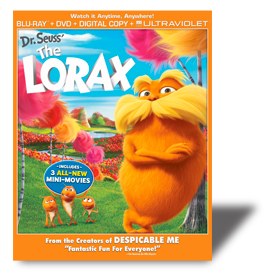 To make this simple story work for an 87-minute movie, the creators have added a new story. A 12-year-old boy, Ted (voiced by Zac Efron), a resident of Thneedville, is infatuated with Audrey (Taylor Swift), who is in turn obsessed with the idea of having a real tree in her yard instead of the artificial ones that clutter the cityscape. To find a real tree and win the girl, Ted must visit the Once-ler (Ed Helms) who lives outside of town. The Once-ler tells Ted the original Dr. Seuss story in flashback installments, which alternate with scenes of life in current Thneedville, a town where residents must buy bottled air to be able to breathe properly. They buy the air from Mr. O'Hare, a new villain invented for the film.

The movie plays more like a big Broadway musical than an accurate rendition of a somewhat intimate Dr. Seuss story, but I like it. If you absolutely, positively feel that cinema must adhere faithfully to a source, you'll hate it. But if you can make the transition and accept the alterations as being excellent expansions in the right spirit, you can have a really good time with this colorful animated movie.

There's so much to like here. The Truffula Trees are vividly colored and they pop in your vision like so many fuzzy lollipops. Ted's cool Grammy Norma is adroitly voiced by Betty White. There's a trio of fish who stand on their tails (out of the water) and sing with the sound of Alvin and the Chipmunks and the expertise of the Andrews Sisters. There's the cool bulbous one-wheel motorized unicycle that Ted rides, and there are possibly the cutest animated bears ever created for a film. The songs are tuneful and the message is still clear, though the big cast ending is happier than the up-in-the-air end of the original book, which points the way but doesn't come to a pat conclusion.

Happily, the movie is brought to Blu-ray with a picture that rivals any from Pixar. Full of bright, eye-popping colors, perfect definition, and ideal contrast, the disc is demonstration-class material. The DTS-HD Master Audio 5.1 sound is just about as remarkable, and the tracks are robust and warm yet bursting with definition and clarity. The full 360-degree soundfield is used nearly all of the time, and every bit of the dialogue, music, and sound effects are carefully placed in exactly the right spots. These tracks should be up for an Oscar nomination next year.

The extras are all fun, and they include a mix of games, production featurettes, and three mini-movies. The first of the mini-movies is hilarious; the other two less so. There's one deleted scene that should appeal to cat lovers; I particularly liked it because the black-and-white cartoon cat looked so much like an animated version of my own cat, Jeoffry. The package also includes a good-looking DVD in case you don't have Blu-ray yet.

Be sure to watch for: Look for textures throughout the movie. The hair, skin, and clothing are so true that they seem three-dimensional and real.