Last month I praised the JBL Xtreme 2 as being one of the brawniest Bluetooth speakers out there, and now comes EcoXGear’s EcoXplorer, a smaller cousin of their mighty EcoBoulder. Indeed Grace Digital and its EcoXGear subsidiary have established a record of producing quality merchandise at low prices. The EcoXplorer weighs five pounds more than the JBL but costs only slightly more than half as much: $169.99 USD. 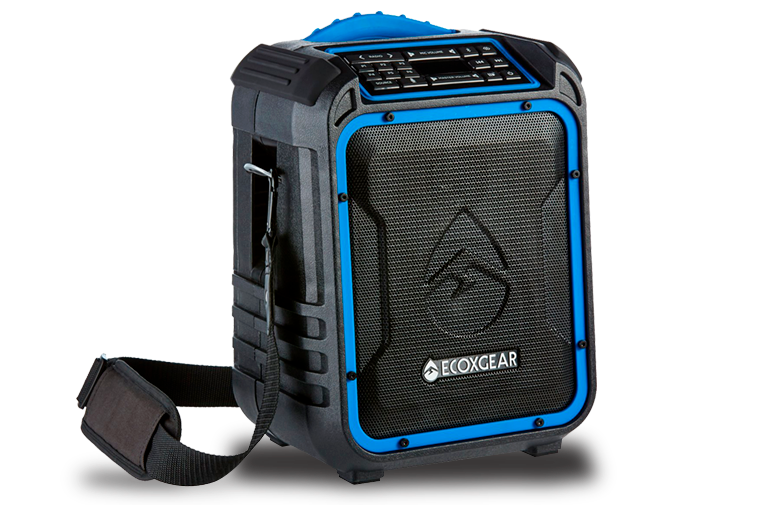 Grace Digital keeps it simple. Inside the appealing and colorful box, which shows the EcoXplorer being drenched in water, is the speaker itself, a power cord, an adjustable carrying strap, and a large, honest-to-goodness instruction manual in readably sized type with exceptionally clear diagrams.

The EcoXplorer is basically a rectangular box 13”H x 10”W x 7”D and weighing a whopping ten pounds. It has a slightly sloped top panel, rubber feet, a large rubberized carrying handle, and a hook on either side for the strap. (In a nod to partygoers, tailgate or otherwise, the hooks also serve as bottle openers.) Like most models of its type, the EcoXplorer is made of a hard rubberized plastic, but it’s so solidly built that I felt I could throw it across the room, bounce it off the wall, and it would keep making music. I’m told that some use it for whitewater rafting. Its sturdy, bulldog-like, industrial appearance isn’t exactly pretty, but it comes in a choice of orange, blue, or gray trim.

To access the charging jack or to run the EcoXplorer on AC wall power, you remove one of the tethered waterproof caps on the rear panel. These are cleverly designed, with arrows indicating whether they’re closed or open. As you face the rear panel, the power jack is in the right-hand waterproof compartment, which also contains the master power switch. Switching this on lets you then turn the speaker on and off from the top panel. In the left-hand waterproof compartment are three more jacks: USB, auxiliary, and microphone. The USB jack only outputs power, to charge other devices. 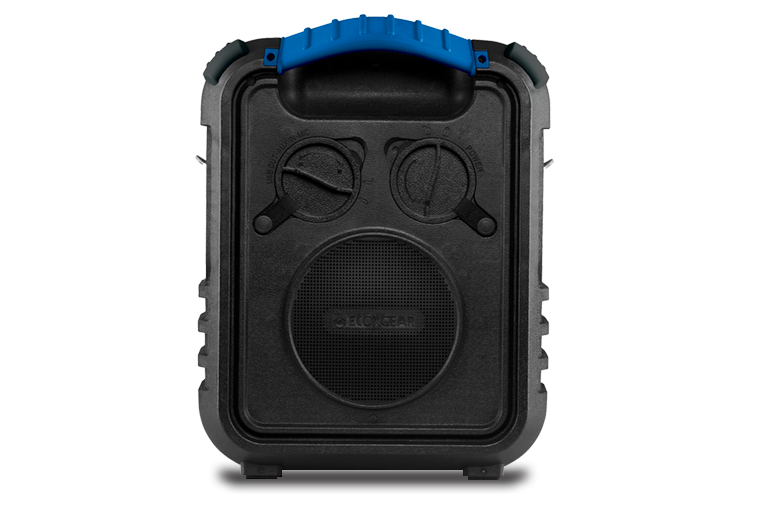 Behind the front grille are the two drivers, a 2” tweeter and a 5” midrange-woofer; the grille is featureless, other than the trim and, near the bottom, an EcoXGear logo. On the back, below the waterproof ports, is the grille for a 5” passive radiator. Unlike most portable Bluetooth speakers, the EcoXplorer is plugged into the wall to charge its battery. A full charge of the 12V, 2.3Ah SLA battery takes about five hours and provides some ten hours of playing time at maximum volume, or up to 30 hours with the volume slightly reduced.

All controls are on that sloped top panel, where a small central display clearly lets you know what the currently selected function is. To its left are the FM and AM tuner controls (yes, unlike many Bluetooth speakers, this one includes a radio). You can store six presets each for FM and AM, and use the long bar at top left to scan for stations. At bottom left is the Source button, for selecting among Bluetooth, Aux, FM, and AM. Next to that is the EcoTalk button, which activates a Voice Assistant (Siri or OK Google) on a paired device.

At center, above and below the display, are toggle bars for setting the overall volume level (bottom) and microphone level (top), should one be plugged in. This makes the speaker able to act as a PA unit. At top right are the Bluetooth pairing and EcoConnect buttons; below them are buttons for forward and back, and below those are the Play/Pause and On/Off buttons. To the right of these last four buttons are four green LEDs that display the status of the battery charge. The screen characters are bright red, and the button for pairing includes a tiny LED that flashes blue during pairing. 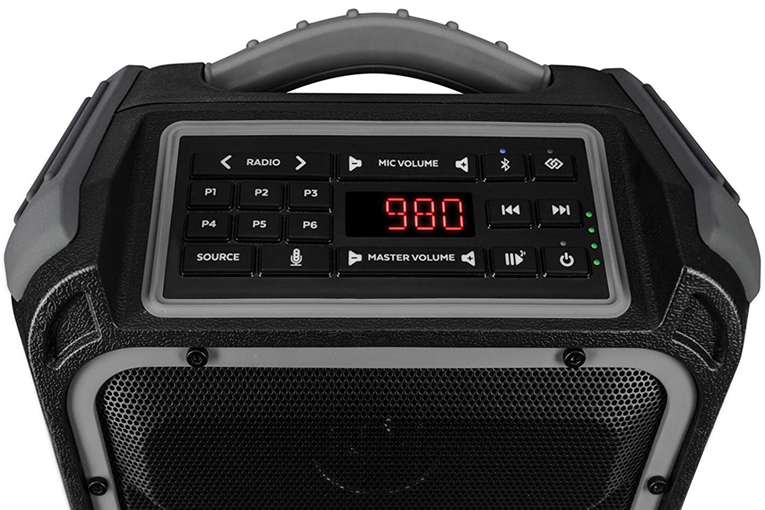 Greg Fadul, Grace Digital’s enthusiastic CEO, told me that 92% of buyers listen with just one speaker. Nonetheless, the EcoConnect button is used to pair two EcoXplorers for stereo or two-channel mono (the speakers’ assignments as the left or right channel can also be reversed).

Specs from Grace: The EcoXplorer’s Bluetooth compliance is 4.1, its peak output power is 50W, its USB output is 5V, and its waterproof/dust rating is IP67.

I mostly found the EcoXplorer a delight to use. It’s big and heavy, but Grace has provided two ways to carry it around. I preferred the handle when I just wanted to move it from room to room, and the shoulder strap for longer schleps. Nice to have the choice.

The EcoXplorer sat solidly on its rubber feet, and paired easily with my Benjie Rocker music player. I preferred to leave the Grace plugged into the wall when not using it, so that it was always charged up and ready to go. I played it on battery power for several afternoons, but was never able to get those battery LEDs lower than two out of four. The Grace’s range of solid Bluetooth operation in my house was about normal: 21’. 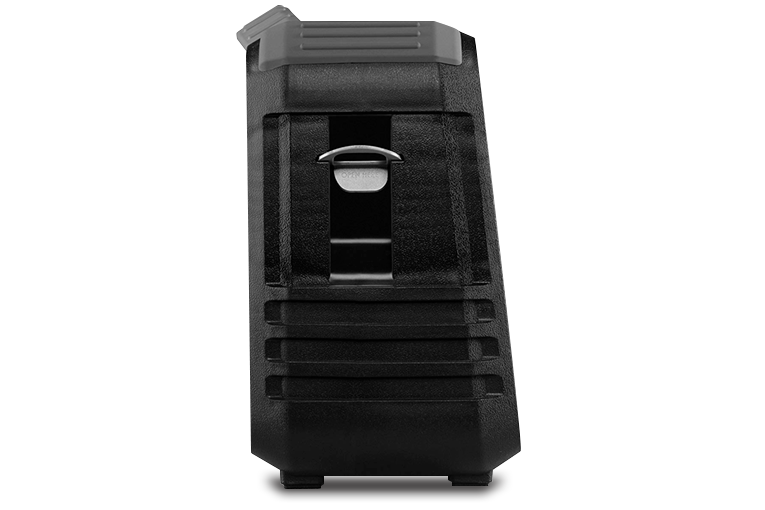 The radio worked very well, but the number of stations received will of course depend on where you live. I live in the country, in the foothills of the Blue Ridge Mountains -- it’s difficult to get good FM at home, but the EcoXplorer was able to receive three or four stations clearly. If you live in an urban area, you’re sure to receive many more. The presets were easy to set -- just tune in your station, then hold down the preset button you wish to use until the entire display flashes twice: the station has been successfully preset.

I was unable to test the EcoXplorer’s waterproofing or its ability to float: I have no bathtub -- just a shower -- and the Shenandoah River was near flood stage. But I’ve reviewed a number of smaller EcoXGear speakers, and they’ve all passed the waterproof test with flying colors, so I have no reason to believe that this one won’t do as well. I did put it in the shower for 15 minutes, and it seemed to suffer no ill effects. You just have to remember to close those waterproof ports, following the instructions in the excellent manual.

The EcoXplorer’s spoken confirmations of “Power on!” and “Connection successful!” were nice touches. Speaking of voices, only one of my devices, an iPod Touch, includes Siri. Sure enough, when I pressed the EcoTalk button on the EcoXplorer, my screen showed me the voice options I had. I requested particular tracks, and Siri complied about 80% of the time.

The EcoXplorer didn’t sound like a typical portable Bluetooth speaker. About as big as a hefty minimonitor or bookshelf model, it pretty much sounded like one, albeit one tweaked for use outdoors. The frequency response -- which Grace doesn’t specify -- seemed weighted slightly to the midrange and treble, for an overall sound that was bright but not harsh. The midrange, focused but fairly transparent, was impressive at reproducing voices, and the upper frequencies were chipper and just a little less transparent than the mids. The bass was solid -- I was surprised at the quantity and quality of the lower frequencies.

The EcoXplorer played louder than the JBL Xtreme 2 without distortion, but I found that I eventually could play it loud enough to distort. It was at its undistorted loudest when I turned the volume all the way up, then backed it off two clicks. It was still loud enough to fill a medium-size room when you don’t want to talk to anyone!

Steve March Tormé began his career singing and writing imaginative rock and pop music. I cherish his debut album, Lucky, released under the name Steve March and which I’ve transferred from LP to digital file. Later in his career he chose to emulate his dad, Mel Tormé, and has become an A+ jazz singer. One of his best albums, Tormé Sings Tormé, was recorded live in high resolution by AIX Records and was released on DVD and CD; from the latter I made a 16-bit/44.1kHz ALAC file. Through the EcoXplorer, it sounded outstanding. Tormé’s voice had amazing presence, the bass was rock solid, and the highs were crisp and generally clean but not as transparent as I would have liked. Each instrument, particularly the piano and saxophone, had just the right timbre. 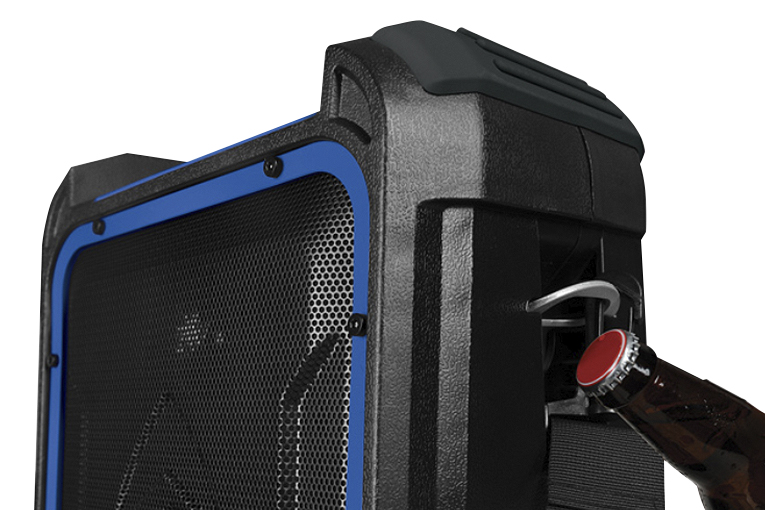 “Chains,” from Nick Jonas’s self-titled album (16/44.1 ALAC, Island), was one of my favorite workout songs when I was still able to go to the gym regularly. The beginning, low-frequency heartbeat in guitar and drums came through the EcoXplorer accurately and very focused. Later in the song there are a lot of overdubs -- extra percussion licks and voices. These were clean as a whistle: no mess, no distortion, just a really clear mix with good presence. As revealed by the EcoXplorer, Jonas’s singing is exciting, with more nuance than you might expect. This might come from his early days performing in Broadway shows such as Les Misérables. Jonas is not just a glam pop star, but a good musician as well.

I tried one of my favorite Vaughan Williams works, the overture The Wasps, with Sir Adrian Boult conducting the London Philharmonic Orchestra (16/44.1 ALAC, EMI). It begins with trills in the winds, in imitation of buzzing wasps. These had a lot of zing and presence, and the ensuing woodwind solos were sweet yet chipper, and the majestic brass, aided at times by percussion, were full and rich without overpowering the rest of the orchestra. Other classical files sounded equally good. In fact, just about all music sounded excellent through the EcoXplorer.

Once again, Grace Digital’s EcoXGear division has produced a component that’s exceptionally user-friendly, impressive on just about every count, carries a generous warranty of three years, and is very affordable. If you want even more sound and features (e.g., a storage compartment for your other devices), check out the even bigger Boulder ($249.99). But for my $169.99, the EcoXplorer has sound that’s just as good -- and it’s more easily portable.