Do you get tired of reading reviews with namby-pamby recommendations that sound as if the writers have worked full time to ensure that they can find a way out of their statements at a later date? It happens all the time in the world of wine criticism (my other job). For example: “This wine has a pleasing aroma of stewed plums and candied lychees with a hint of leather and Tellicherry black peppers. Rating 88.” What does that mean?

When we buy things, by and large what we’re looking for is a solution to a problem. In audio, the questions might be:

1. Does it effectively do what it’s claimed to do? (An amplifier should amplify.)
2. Is there anything else available that does the job as well as or better, but costs less, is more dependable, sounds better, or all three?
3. Based on my financial situation, will this give me more of what I want, for the money I can afford to spend, than any other option?
4. What is the usable life of the product?
5. Will my friends be envious?
6. Will I be able to get a fair amount in return when I finally sell it?

Everyone will have his or her additions to this list, and some might omit eliciting uncomfortable feelings from their buddies. But I always try to find products that excite me. The grail of audio is any component that outperforms its similarly priced brethren and makes a demonstrable improvement to the sound.

The least expensive items with a permanent place in my system are the brilliant speaker stands made by the Canadian company IsoAcoustics. I currently own two pairs of their stands, the ISO-L8R200s and the Apertas. They’re the only stands I’ve ever used that demonstrably and repeatably improve the openness and clarity of my system’s sound. In fact, I’ve never found a smallish speaker that doesn’t sound better when placed atop an IsoAcoustics stand. Now IsoAcoustics has just released their new ISO Series stands, and they’re even better. I got the ISO-200s, which list for $189 USD/pair. 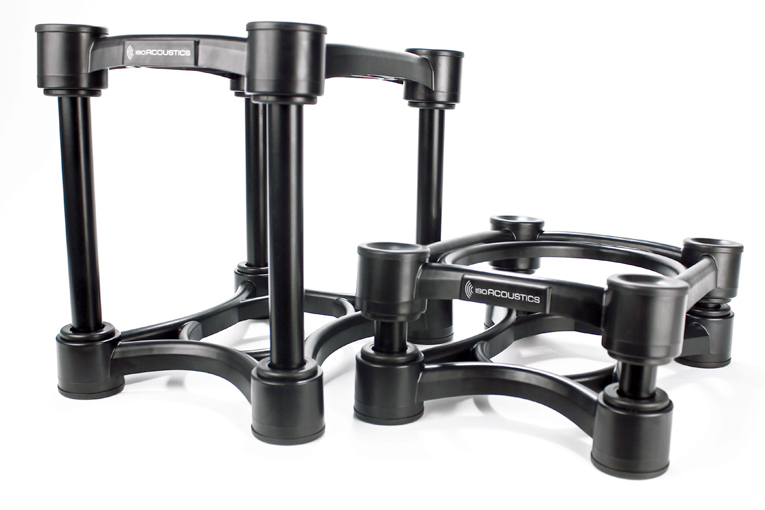 But first: After my last review, I received several letters from folks who’d bought ISO-L8R200s and put ~$100/pair speakers on them. So I want to make one thing very clear: The new ISO-200s will not turn a pair of so-so speakers into Magicos. Instead, they make my speakers sound like their own best version of themselves.

I currently have two sets of reference speakers: the Barefoot Footprint01 ($3745/pair) and Focal Solo6 Be ($3990/pair). I’ve tried both with all sorts of stands and stand substitutes, none of which has provided the type of consistent improvement in sound I’ve heard with the IsoAcoustics. I used these two sets of speakers for this review.

The route to audio nirvana is not a straight one. We’ve all disappeared down rabbit holes that cost real money but produced little in the way of audible results. By the time we’ve emerged, most of the denizens of that particular rabbit hole have moved on to other, more exotic ways to burn cash. As a reviewer, my goal is to find components that create a real difference in sound, making sure that the difference is an improvement, and that it’s commensurate with the cost. Who cares about devices that raise the speaker cables off the floor if their improvements to the sound just barely bump the edge of perception, yet they cost hundreds or even thousands of dollars?

The ISO-L8R200 has always enjoyed the benefit of demonstrating -- to me, at least -- a significant improvement in the sound, at a price that seemed too good to be true. Its only problem was one of perception. After getting used to the sound of a less precise way of propping up their monitors, people sometimes didn’t like the change in sound, misunderstanding the dramatic improvement in openness as a hollowing of the frequency response.

What has IsoAcoustics done to improve a product that was already a keen piece of gear? I contacted Paul Morrison, IsoAcoustics’ director of sales and distribution, and asked.

“The new ISO series has a new look,” he told me. “The previous model we felt had to have a bulkier look so that customers felt confident putting expensive speakers on the stands. Now that we have made a name for ourselves and people trust us, we wanted the new version to be a little more aesthetically pleasing. The new version has a lower profile on the short setting compared to the previous version. Finally, the isolators have been re-designed and are a step forward in terms of performance.” 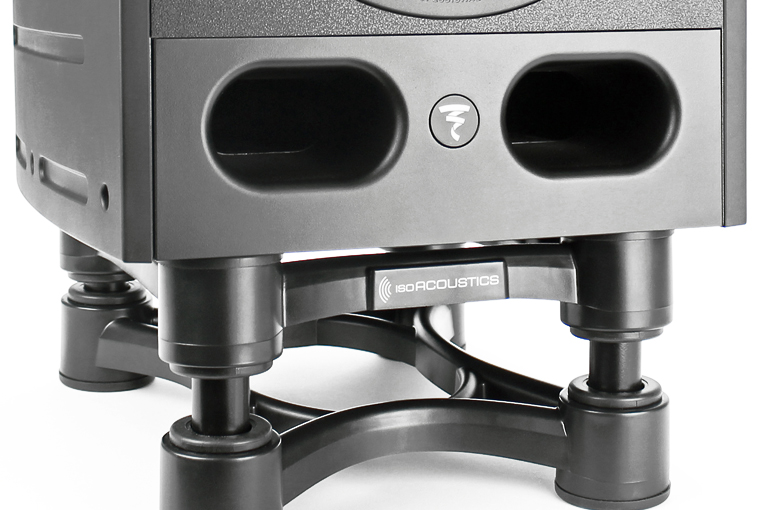 IsoAcoustics has also developed a smart system for setting the tilt of the speakers, something very important for anyone who uses professional monitors, which are designed to be listened to in the nearfield and aimed directly at the ears. The new ISOs’ improved lower profile is a vital upgrade for many of us because it offers more flexibility, whether you choose to place your speakers on a desktop or a meter bridge.

I could see no obvious changes in the isolators, but the proof was in the listening. The Master setting on Tidal or Roon is a gift from the Almighty for anyone who loves jazz of the 1950s and ’60s. All those uncomplicated productions sound simply amazing -- suddenly, I have an enormous quantity of some of my favorite music in reference-quality sound. Herbie Hancock’s Maiden Voyage is one of the greats, and the title track bristles with slow-burning power. Oliver Nelson’s The Blues and the Abstract Truth features a glorious reading of “Stolen Moments” with especially inventive work from Bill Evans, Paul Chambers, Freddie Hubbard, and Eric Dolphy. The ISO-200 stands make the sound and the soundstage more open, to let these recordings speak at their highest level. They won’t make a lousy ’80s rock record sound like a masterpiece of restraint, but if there’s room sound on the recording, it will pop with these stands.

Brad Mehldau’s 10 Years Solo Live (4 CDs) ends with a jaw-dropping, 16-minute version of Brian Wilson’s “God Only Knows.” Again, the IsoAcoustics stands opened up the soundstage. For some reason, Tidal hasn’t made Mehldau’s Songs: The Art of the Trio Volume Three available in a Master recording. Mehldau, the most exciting jazz pianist performing today, creates shamanistic psychedelia in “Bewitched, Bothered and Bewildered.” The interplay among his trio is on the level of Bill Evans’s or Keith Jarrett’s best trio recordings, and the ISO-200 stands help clarify the instruments in a real three-dimensional space.

Beck’s Sea Change includes one of his masterpieces, “Lonesome Tears,” in which a big Joey Waronker drumbeat leads into a string arrangement by David Campbell. Beck obviously favors a bit of compression to bring the sounds together, but the sound has a gorgeous sheen that was supported by the openness of the IsoAcoustics’ sound.

I have trouble with Tom Waits’s later, Harry Partch-inspired music, but his first few albums all included at least one stone classic. Closing Time had “Ol’ 55.” The Heart of Saturday Night had “San Diego Serenade.” Nighthawks at the Diner features a sarcastic yet heartfelt cover of Tommy Faile’s “Big Joe and Phantom 309.” If all of these appeal to you, skip forward to Waits’s Blue Valentine and his cover of “Somewhere,” one of Leonard Bernstein’s most sublime melodies married to one of Stephen Sondheim’s greatest lyrics. The performance is so out there, yet so totally, typically Waits, that the song has the power of a Rorschach test. If you like this, you’ll like Waits’s more challenging, later releases. Otherwise, stick to the pretty stuff on the early albums. 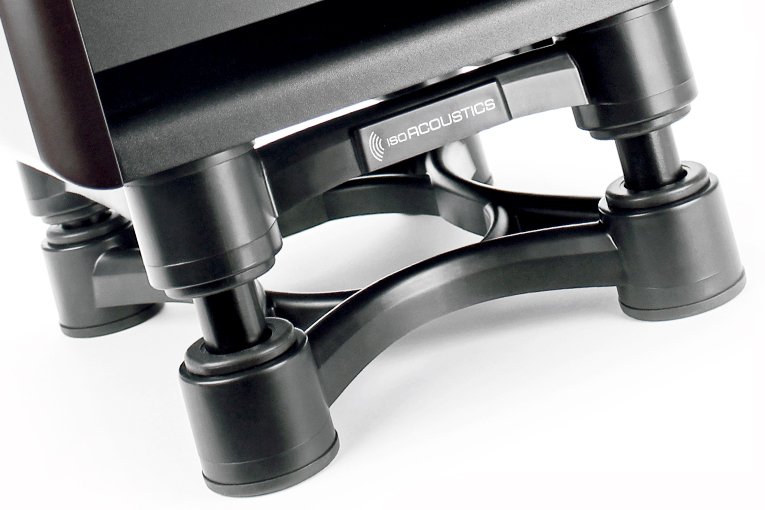 With these recordings, the IsoAcoustics stands proved their abilities by specifically fixing the instruments in three-dimensional space in a much more convincing manner. Two things to point out are the entry of the strings in “San Diego Serenade” (from Saturday Night) and the found sounds in “Phantom 309.” Again, presuming your speakers are good enough, you’ll hear a good deal more soundstage information, and your speakers will be more likely to “disappear.”

That last benefit was obviously down to the isolator technology. I remember back when we wanted to clamp speakers down so tightly that the earth would move before the speakers. That type of speaker stand required an enormous amount of physical mass, and ingenious ways to make the stand lie flat and plumb to various types of flooring. The stands I bought to use with my old ATC SCM-50A speakers cost thousands of dollars and required extensive work with a bubble level -- I even had to hollow out the front of each speaker so that I could physically clamp speaker to stand. At 108 pounds, those speakers weren’t going anywhere soon, but in those days, we were a little crazed about getting a solid connection between the bottom of the speaker and the floor.

The IsoAcoustics stands take a different approach. They don’t depend on mass or sharply spiked interfaces. The stands are plenty strong enough to hold my 35-pound Barefoot speakers, yet light enough that I can carry an entire home theater’s worth of stands in one hand.

I can’t put it any more plainly. IsoAcoustics’ new ISO-200 is the best $189 that anyone with a pair of small speakers, especially nearfield speakers, could possibly spend.