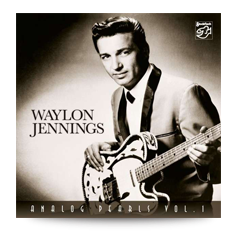 A New Series of Analog Recordings from an Unexpected Source

Waylon Jennings had a long performance history fraught with many recording-label changes. He did a stint with A&M Records in the '60s, and that's where the tracks for this Stockfisch album derive. As near as I can tell, these tracks were recorded in 1964 but released mostly as singles, until in 1970 (long after Jennings had jumped over to the RCA label) when A&M released most of them in a compilation album called Don't Think Twice. There are some differences: the A&M album contains two Bob Dylan songs, the title track and "I Don’t Believe You (She Acts Like We Never Have Met)," whereas the Stockfisch set just contains "Don't Think Twice It's All Right." Only the A&M set contains "The Race Is On," and only the Stockfisch disc contains "Sing the Girls a Song, Bill," "Sally Was a Good Ole Girl," and "Charlie Lay Down the Gun." Otherwise the content is identical.

The sessions, produced by Herb Alpert, featured Jennings with his backup band, the Waylors, consisting at that time of Gerald (Jerry) Gropp on guitar, Richie Albright on drums, and Paul Foster on bass guitar. The Waylors went through many personnel changes during the '70s and on, but they backed Jennings until his death in 2002. On Analog Pearls Vol.1, there's also an unnamed chorus.

Recorded long before Jennings developed his familiar outlaw image, the album presented Jennings clean-shaven and neat, and is perhaps more folk than country. It contains some of the biggest folk/pop songs of the era -- the Dylan, of course, and "The Twelfth of Never," "Kisses Sweeter Than Wine," "Four Strong Winds," and "The Real House of the Rising Sun." These are all sung in a straightforward and musical manner, the chorus being less syrupy than many of that era. "Stepping Stone" and "River Boy" provide a little taste of country, and "Sally Was a Good Old Girl," one of the best cuts on the short disc, is straight-on rockabilly. The final song, "Charlie Lay Down the Gun," was written by Jennings himself and is a curious little piece about a romantic competition, the winner singing to the loser. My second favorite song here is "The Real House of the Rising Sun," which receives the most dramatic performance on the disc. I'll add it to my two or three favorite versions of the song.

According to the Stockfisch notes, these sessions were recorded with RCA ribbon microphones (RCA 44/RCA KU-3A), and further program notes indicate that they are still made under the AEA name and that Stockfisch has a couple on hand for "daily use." You can hear the similarities over the years, as the vocals on this program, recorded in 1964, sound very much like ones recorded by current artists for Stockfisch 50 years later -- pure and clean, with lots of genuine presence. The overall effect, with the Waylors behind Jennings and the occasional right-channel chorus, is one of overwhelming simplicity. Twenty-first century artists, who tend to clutter their sound fields with thick, ugly, and unnatural sounds, ought to be forced to listen to this SACD, which proves that less can be more, and that simplicity will never go out of style.

The album is titled Vol. 1. I will be looking forward to hearing the pure analog masters that Stockfisch discovers for Vol. 2 and beyond.

Be sure to listen to: Play "Kisses Like Wine" and follow each individual line, vocals, guitar, drums, and bass. It's so clean, so clear, and so musical. Keeping it simple pays off big time.