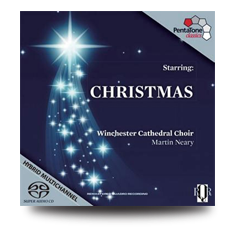 A Lovely Christmas Album Can Now Be Heard As Originally Intended

For some, the holiday season is a time to hear choral music, with or without organ or orchestral accompaniment. This year PentaTone has obliged by releasing a recording that has been waiting in the wings for 40 years in order to be heard properly. And heard that way, it is an undeniable gem, a warm and glowing tribute to Christmas.

Starring: Christmas (a rather inappropriate Hollywood-like title in my opinion) has moments of grandeur, such as the end of “Once in Royal David’s City” or the chorus and organ outbursts in “Unto Us a Son is Born.” But mostly this is a sweet and quiet program speaking more to the view of snow on a quiet landscape by moonlight rather than the burning fury of a star in the East.

There’s a touching and gentle version of “Silent Night”; in fact, one of the best choral versions I have ever heard. Its first verse is sung by an uncredited solo treble (a boy soprano), who adds a simple and quietly splendid descant to the last verse. Oddly enough this is the only hymn descant on the disc -- odd because most English choirmasters write superb ones at the drop of a hat. Perhaps choirmaster Martin Neary felt that having too many descants would have taken away from the intimacy of this program.

Simplicity is a watchword for this offering, except for the stringent harmonies and louder sounds found in “Unto Us a Son is born.” The arranger is not credited. Could it have been Neary himself? The quieter, simpler tunes include “We Three Kings,” “In dulci jubilo,” William Byrd’s “Lullaby,” “Whence is that Goodly Fragrance,” and “See Amid the Winter.”

I mentioned that this recording has had to wait some time to be heard properly. It was recorded in 1973 at the height of the “quad” era when it was possible to make four-channel recordings using the tape transports of the day. Unfortunately, the vinyl delivery systems were not up to reproducing what had been recorded, but the surround systems of today handle those master tapes with ease. Polyhymnia, the parent company of the PentaTone label, has by now made almost all of the Philips quad recordings available in multichannel versions on SACD. They have opted not to remix them, but to go with the original four channels: two up front and two in the rear.

Starring: Christmas uses the surround channels to create a sense of space, specifically that of Winchester Cathedral. The long echo of this location is there hanging in the air and exiting out the back, but it is not so prominent as to muddy what’s going on up front. In fact, the front soundstage has some of the most transparent sounds I’ve heard from a chorus and organ combination. It’s a lovely recording job that does the music full justice.

If you don’t have surround sound, rest assured that the disc does have regular CD tracks and that these sound excellent. Using the surround, however, makes the sound blossom and turns something excellent into a near magical event.

Be sure to listen to: In “We Three Kings” there are verses sung by soloists with a sort of mysterious dulcet sound in the upper registers of the organ with occasional very deep, though soft, bass pedal notes. It’s a very evocative sound captured to perfection on the SACD tracks.