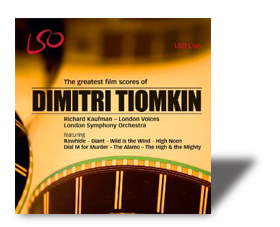 I used to have a friend I always hauled along to the movies with me. We’d come out afterward and I'd say, "What a great music score!" "There was music?" he’d reply. I guess not everyone notices it, surely not the dreck we're hearing today. Try this test: whistle the theme from Star Wars Episode IV: A New Hope. Got it? Now whistle the theme from The Dark Knight Rises. There was music?

One by one the great melodists of film music have passed on in the last 20 years. This LSO Live SACD comes at just the right time to remind us of one of the greatest -- Dimitri Tiomkin (1894-1979). Tiomkin lived a remarkable life. He was born in Russia and went to the Petersburg Conservatory where he studied music with Alexander Glazunov, composer of The Seasons ballet. Then he went to Berlin and studied piano with Busoni and Egon Petri. He made his American debut as a pianist at Carnegie Hall in 1927; a year later he played the European premiere of Gershwin's Piano Concerto at the Paris Opera.

His big break in Hollywood came with the amazing score for Frank Capra's Lost Horizon. After that he was in great demand as a film-music composer. He won an Academy Award for High Noon, The High and the Mighty, and The Old Man and the Sea, and since he wrote such memorable melodies he was often nominated in both Best Music: Original Song and Best Music: Scoring of a Dramatic or Comedy Picture categories in the same year.

The LSO Live release presents a generous sampling from Tiomkin’s catalog. All of the Academy Award scores are included. In addition to these, there are suites, overtures or incidental music from Cyrano de Bergerac (a real gem I'd not heard before apart from the film), The Alamo, The Four Poster, Giant, The Fall of the Roman Empire, Wild Is the Wind, Rawhide, The Sundowners, Circus World (John Wayne was a close friend so Tiomkin scored many of his movies), Dial M for Murder, Strangers on a Train, Land of the Pharaohs, and Friendly Persuasion. Richard Kaufman leads the London Symphony Orchestra with assists from the London Voices and soloists Whitney Claire Kaufman and Andrew Playfoot. The performances are impeccable, yet they miss the last bit of energy that Charles Gerhardt put into his film score series for RCA.

The sound was a puzzle. Played at normal volume it seemed distant and remote with little presence. But it turned out to be one of those recordings that has an elusive level at which everything comes together. In my case I had to play it about five to six dB over the level I consider my average, and then the recording blossomed into rich, full, and vibrant sound, with the surrounds perfectly balanced to create a three-dimensional illusion.

LSO Live has talked this release up as the beginning of a series, but I haven't seen any information on future projects. If subsequent releases are the same quality as this one, all film music lovers will eagerly anticipate them.

Be sure to listen to: Rawhide. Maybe music really is the international language. Tiomkin was Russian, but he created an iconic sound for American westerns. I tried to close my eyes and not listen to the lyrics while imagining Cossack dancers. It worked.