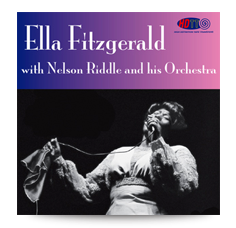 Fellow reviewer Richard Freed has noted the high-resolution effect often in his "Keepers" column, which pertains to classical music, on SoundStage! Hi-Fi. Though Witrak has dabbled in some jazz along the way, Ella Swings Brightly with Nelson is his breakout into recordings by jazz artists who are household names. The recording first appeared on a Verve Records LP in 1962. Produced by the legendary Norman Granz, it was half of a two-album release, the other title being Ella Swings Gently with Nelson. HDTT has used the Verve Ampex four-track tape for its master.

The sessions found both Fitzgerald and Riddle at their best. Ella's voice had matured but still contained a bit of the appealing girlishness of her early days. Riddle had come off a successful ten-year stint at Capitol Records, where he'd done arrangements for almost all the great Capitol artists, including Frank Sinatra, Nat King Cole, Judy Garland, Keely Smith, and Dean Martin. Riddle and Fitzgerald were not strangers -- he had arranged 1959's Ella Fitzgerald Sings the George and Ira Gershwin Songbook, and the two would work together again on songbook sessions devoted to the music of Jerome Kern and Johnny Mercer.

All of the cuts on this download are bright and chipper; it sounds like everyone was having a good time. Since Riddle has the baton, there's lots of punchy trombone work, and at the other end of the musical spectrum there are sweeping, soaring strings. Things get off to a rousing start with a bouncy version of "When Your Lover Has Gone." Up next is "Don’t Be That Way," with Riddle's arrangement impressive as a fine tribute to Benny Goodman's version, which hit the top of the charts in 1938.

"Love Me or Leave Me" receives a saucy performance from Fitzgerald, while the rhythmic arrangement scores with syncopation and stinging trumpet riffs that ruffle the floating, sustained string scoring. Full brass and saxes, all stops out, are used for the instrumental middle section. "I Hear Music" and "What Am I Here For?" continue in the same vein, and then Fitzgerald digs up that girlish sound for a sweet and innocent version of "I Won't Dance." There's a little more sensuous tone and innuendo for "The Gentleman Is a Dope," and willful regret for "Mean to Me." The album ends on a big high with "Pick Yourself Up."

I was in a singular situation for comparison, in that I had a 24-bit/96kHz rip of the vinyl disc. The HDTT download wins hands down. There's a lot more detail, and the sound is more three-dimensional -- the vinyl file sounds flat in comparison. Ella's voice sounds fuller, and though the orchestra sounds bigger, it also sounds cleaner. A lot of filigree passages, those with piano and vibraphone in particular, come through with greater clarity. Bass is also fuller and has more focus.

If you're getting into downloads, HDTT is surely a stop you'll want to make. Let's hope that owner Witrak will be able to find more Verve four-track tapes of this quality. I was a big collector of four-track back in the day -- in fact I mostly gave up vinyl to pursue tape -- and I know there were lots of interesting jazz and pop tapes as well as classical ones. Whether they survived or not might be another issue.

Be sure to listen to: The arrangement and recording of "Pick Yourself Up" exemplify the exaggerated stereo separation so popular in the early '60s. Saxes left, brass right, percussion left, piano right, with vocals in the center. During the instrumental bridge on this cut, the saxes and brass duel it out, left and right. The end has a next-to-final say from the brass on the right and a stinger from the drums on the left. Lots of fun.