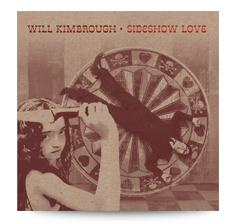 Will Kimbrough Takes the Lead

Will Kimbrough has often served as a sideman in backup bands for the likes of Rodney Crowell and Emmylou Harris (just to name a couple; the list is long), but on his new album, Sideshow Love, it's all his show and he proves more than up for it. He's a terrific songwriter, an appealing singer, and he plays mean, lean guitar, banjo, mandolin, and more. At times I heard shades of Rodney Crowell (no surprise there), Tom Waits, and Loudon Wainwright III. I use those names merely as a reference point, because Kimbrough doesn't actually sound like any of them, but he triggered those connections in one way or another when I listened to his superb CD.

Sideshow Love is all about love, but it's in no way like the sappy, lovesick image that might come to mind when I say that. Kimbrough has either a simple, sincere way of looking at the four-letter word, as in "Soulfully," "Has Anybody Seen My Heart," "All We Can Do Is Love," and "I Want Too Much," or he has a devilish sense of humor bordering on a carnival atmosphere in such biting numbers as "Home Economics" and the title song, which sets forth an age-old idea in a different way.

Somewhere in the middle of the musical rollercoaster ride, Kimbrough takes time to make some wry observations about sex in "Dance Like Grownups Dance."

Sensitivity is not my strong suit I confess
Let me say what's on my mind
Take off that party dress
Let's dance like grownups dance
Cheek to cheek, skin to skin

After all the ups and downs, Kimbrough concludes the album with a feeling of hope in "Emotion Sickness."

Since Kimbrough has often been in backup bands, he must appreciate the fact that his own backup band is absolutely first rate. The precision is beyond what you usually hear in this kind of music, and little solo spots are played with virtuoso abandon. Pat Buchanan's slide guitar on "Dance Like Grownups Dance" is absolute perfection. But then just about everything else is, too.

Then there's the recording. I never thought I'd give a country-crossover album such a high rating. But this one sounds absolutely ideal. The instruments have plenty of weight and presence, but they never overpower the robust vocals, and there's transparency enough that you can hear little instrumental comments with absolute clarity. And guess what: the credits read "Recorded by Will Kimbrough and David Henry, at Kimbrough Super Service and True Tone Recording." The man's not just a triple threat -- make that quadruple! I'm in awe of his many talents.

Sideshow Love is an album you'll turn on to while you're hearing it; you'll find it enjoyable on multiple listens, and much of it will stick with you for the long haul.

Be sure to listen to: The plaintive "lonesome train" introduction to "Who Believes in You," which returns between verses, is an evocative sound that I found quite beautiful.