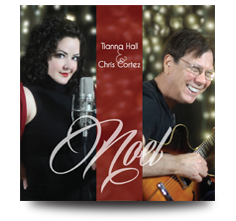 After Hurricane Katrina, New Orleans-based guitarist Chris Cortez moved to Houston where he quickly became a part of that city’s jazz scene. He founded Blue Bamboo Music, which not only gives him a recording outlet for his own talents, but also makes it possible to focus attention on other performers from the Houston area. One of the latter is singer Tianna Hall, whose often-sultry voice is heard on all but one of Noel’s tracks.

Hall has a pleasant enough voice. What it lacks in character, though, is made up for in intelligent use. Hall has a sure sense of phrasing and excellent diction and pitch. Her style seems a little boxed-in to me, but that is probably due to the big-band style charts for this album that were done by Mark Piszczek. Six of them, anyhow . . . Cortez arranged the remaining three cuts. Two of these feature Hall and Cortez, and one, a somewhat dour arrangement of “God Rest Ye Merry Gentlemen” (the second time this season I’ve encountered the printed title without its comma), is played by Cortez as a solo.

Piszczek knows how to get a big-band sound out of a smaller ensemble and this is evidenced in the very successful opening number, called here "The Angels,” but a grand arrangement of what I’ve known all my life as “Angels from the Realms of Glory.” This is followed by the longest track on the album, a medley of “A Child is Born” and Vince Guaraldi’s “Christmastime is Here,” from A Charlie Brown Christmas. This track is followed by a lighthearted version of “Santa Claus is Coming to Town,” which in turn is followed by “The Christmas Song.” The latter receives a somewhat Latin-sounding treatment that is quite original and works very well.

The last two cuts on the disc are both pop songs. “Santa Baby” simply doesn’t work. Hall’s voice sounds truly sweet instead of the mock sweetness required. The song has to be sexy and laden with innuendo and that’s all missing here. On the other hand, “What Are You Doing New Year’s Eve?” is poignant and full of soul, a splendid rendition.

The recording sounds a bit thick to me, like it’s been overdubbed and considerably mixed. Though I must admit that all the parts are clear, I wouldn’t say the recording has clarity as a primary aspect. The bass has good presence but is lacking in focus at times. All in all it’s a cushy sound that makes the ensemble sound considerably larger than it is but, in a nice way, rather artificial.

Noel is not destined to be one of the all-time-great jazz albums for the holiday season, but it is well worth a listen or two.

Be sure to listen to: “We Three Kings” is really a mash-up of that song and “Carol of the Bells.” The way the two are intertwined is clever and natural enough that it sounds like they were always intended to be together just waiting for Piszczek to discover that fact.