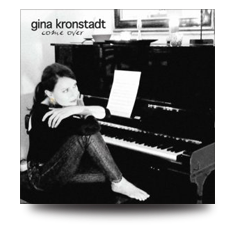 Gina Kronstadt is based in Los Angeles and has a tremendously impressive resume as a violinist. I can say without reservation that you must have heard her. Her motion-picture credits include Pirates of the Caribbean, Disturbia, Star Trek, and three or four dozen others. She's also played on audio recordings by artists such as Ray Charles, Sheryl Crow, Taylor Swift, Barbra Streisand, Rod Stewart, and Elton John. And she's been on a lot of TV shows, including The Voice, The Tonight Show, and more.

Though she obviously has a busy career as an orchestra freelancer, Kronstadt has found the time to write and perform songs, compositions that have made their way to Come Over, her first CD. Kronstadt writes in more of a conversational than poetic style; her words are crisp, clean texts you can easily relate to. Her vocals are assured and professional, and her music style is jazz with some progressive and pop elements brought in.

The disc opens with "Magic," a bouncy number that benefits from a steady walking bass with spectacular sax and flute flights of fancy from Bob Sheppard. It's an unapologetic paean to love:

Freak me, tweak me with your power,
I will never tire.
I just join you on this journey,
and you are on fire.

In a later number, "Turn Around," love is not so happy a prospect:

And so you're broken, cause you been tokin',
and you've been flying up so high you missed our date.
So don't you ever, and I mean never,
think you can phone it up whenever and show up late.

Both Kronstadt's words and music have a very contemporary feel, no more so than in "Twitter Stole My Boyfriend," which she does as jazz rap.

Come Over is not terribly deep, but it's smart and on target and thoroughly enjoyable, helped along by some terrific sidemen. I mentioned Sheppard on sax and flute (bass clarinet too), and there are two superb trumpet players -- John Daversa and Walt Fowler. It's no surprise, given that Kronstadt plays the violin, that there's also a fairly large string section, for which she did the arrangements.

Those strings and all the other instruments sound very good thanks to Kronstadt and mixer Steve Kempster. The recording of various string and horn choirs occurred at different places, so this is definitely a disc that sounds, vocal overdubs and all, mixed rather than natural. But for what it is, it's superb.

Come Over is a breezy album that is easy to listen to. "Magic" and "Twitter Stole My Boyfriend" are musts to hear, and I'll be interested in hearing about Kronstadt's future projects.

Be sure to listen to: "That Night" begins with a pizzicato bass solo from Christian McBride, supported by lush, bowed, string chords. It's like a mini-prelude to the song, and it's very effective.