Vince Mendoza & the Czech National Symphony Orchestra: “Freedom over Everything”

In a less-fragmented musical landscape, composer-arranger Vince Mendoza might be a household name on the scale of Burt Bacharach or Henry Mancini. After all, the 59-year-old has won six Grammy Awards (and been nominated for a total of 34) and worked with stars like Björk, Elvis Costello, Sting, and Joni Mitchell. As it is, Mendoza’s reputation is largely confined to the jazz community, where he’s made his name by furthering so-called “third stream” music with the Metropole Orchestra and soloists like trumpeter Randy Brecker.

More recently, Mendoza has been working with the 28-year-old Czech National Symphony Orchestra, after striking up a working relationship with CNSO cofounder and trumpeter Jan Hasenöhrl. Like Mendoza, the CNSO has flirted with the mainstream, having worked with the famed Italian film composer Ennio Morricone and provided the score for Quentin Tarantino’s The Hateful Eight.

In 2016, as Donald Trump strode to the White House, the CNSO commissioned Mendoza to create a work to reflect the chaos, racial tension, and political polarization that was coming to dominate much of the developed world.

Mendoza’s five-part concerto begins with “American Noise,” a highly layered movement pierced with dramatic flourishes and Hasenöhrl’s powerful horn. As the piece transitions to “Consolation,” Mendoza’s approach—melding jazz rhythm to more germane classical music—becomes clear, with a prominent bass ostinato and some dialogue between solo horn and strings. But “Consolation” also reveals some of the weaknesses in Mendoza’s symphonic writing; he’s quick to reach for the huge gesture, and some of these sweeping rises seem overwrought.

Far more successful are the movements entitled “Hit the Streets” and “Meditation.” The former begins with impressive percussion work by guest artist Antonio Sánchez and shifts into subtle exchanges between mallet instruments, strings, and horns. Sounding like it would be an ideal vehicle for a modern dance choreographer, “Hit the Streets” displays Mendoza at his best, blending movement and succinct statements by unexpected lead voices. “Meditation” was written for soloist Joshua Redman, and the saxophonist brings a strong blues element to the concerto as he rises above swelling strings. 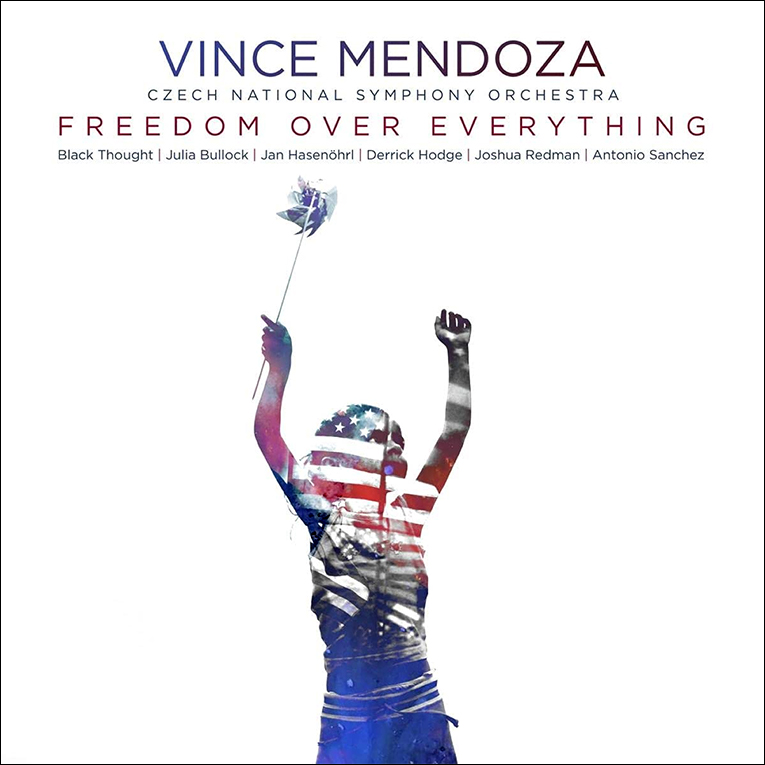 The flow makes a hard shift as “Justice and the Blues” begins. Electric bassist Derrick Hodge rises out of a heraldic-sounding flourish, and following some lush horn and string passages, Hodge and rapper Black Thought step into the spotlight to drive the political point home with “Freedom over Everything.”

From a messaging standpoint, the concerto might have made a more powerful impact had Mendoza stopped there, but instead he moves into the two-minute “Finale,” which concludes things in a more predictable—and bombastic—manner.

But then things get really interesting. As tremendously ambitious, if a bit overreaching, as the concerto is, the album’s highlights are still to come.

First, the young American soprano Julia Bullock delivers a stunning performance of “To the Edge of Longing,” a piece Mendoza composed for her using the poetry of Rainer Maria Rilke. It is Mendoza’s most compelling composition here, and it showcases his ability to create gorgeous string blends.

Finally, Hasenöhrl steps forward to lead the CNSO through the 15-minute “New York Stories,” which has some very effective passages, despite Mendoza falling back on a few “Big Apple” orchestral clichés that make it seem like he’s channeling Leonard Bernstein. Aside from Hasenöhrl, Mendoza highlights some of the orchestra’s other distinctive horn voices with a fine arrangement, and the piece concludes with a powerful bass-propelled stroll through the big city.

There’s a lot going on throughout Freedom over Everything, and Mendoza’s arrangements demand a wide range of dynamics with all those dense flourishes. Jonathan Allen, former chief engineer at Abbey Road Studios, was selected to record, mix, and master the project, and he’s not always completely successful. Listeners may find themselves reaching for headphones to appreciate all the nuances of Mendoza’s writing for strings and horns, only to be blown back by those dramatic waves.