Albert Lee: "Tearing It Up" 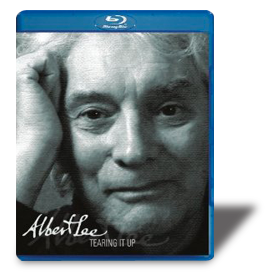 Rockabilly As an Art Form

Mark Waldrep, the CEO, head engineer, and founder of AIX Records, has always been among the best ears for recording rock and country bands. He's also been able to consistently release his efforts on Blu-ray Disc in high-definition audio and video. This disc features Albert Lee, not only as a legendary guitarist but also as a singer fronting a virtuoso band.

From the opening track, "I'm Ready," you can tell something special is unfolding. You're immediately struck by Lee's razor-sharp delivery -- it's amazing that so much energy can emanate from his small frame. Perhaps it's the setting, with the players grouped around a Persian carpet, or the fact that there's no raucous audience applause (Waldrep fades the video out at the end of each number in order to give the album a studio feel). I had the feeling that this energy-driven set was patrician for its genre; it's rockabilly raised to an art form.

As Lee and his band breeze through songs like "Rock Around with Ollie Vee," "Restless," "Sleepless Nights," "Don't," and "Tear It Up," we're treated to some of the best integrated band sounds I've heard in some time. That cohesion is especially remarkable when you consider that the band comprises a group of pros assembled just for this recording. Pedal steel player Randle Currie plays on Brad Paisley's tours, and some of the other musicians are from the California locale where the recording took place. I must single out J.T. Thomas, an absolute madman at the piano, on a Steinway at that!

Lee seems very much a performer for the present, but he was the lead guitarist of Emmylou Harris's band for some time, and he includes an energetic version of "Luxury Liner" in this set. He also romps through his biggest hit, "Country Boy," which he co-wrote. His daughter, Alexandra Lee, seen mostly in opera circles, becomes a very effective lead singer for "Dimming of the Day," and Albert backs her up both as a musician and, I am sure, a very proud dad.

What can one say about the sound on this disc, except to call it perfect? Waldrep has a touch for setting the microphones up just so, and he has the sense to leave things alone once they're perfectly in place. He's proud of this -- the blurb on the jacket proclaims, "No Dynamic Processing / No EQ / No Artificial Reverb." I think everyone, even the novice, will notice a difference in the sound of this disc based on the lack of processing, EQ, and artificial reverb that are so overused on other recordings. Waldrep also supplies several mixes: Dolby TrueHD Stage and Audience 5.1 perspectives, Dolby Digital 5.1 Audience perspective, and 2.0 PCM 24-bit/96kHz stereo. If you have a Blu-ray drive in your computer, he offers downloads of two-channel FLAC 24/96, MP3 stereo at 320kbps, and two-channel surround mix for headphones at 24/48.

The video is crisp HD with good definition, excellent color, and spot-on contrast. The camera is usually, if not always, where it should be, capturing the player of the moment and moving around to show different video angles without seeming restless. A number of extras ice the cake, including three interviews with Lee, complete bios of all the musicians, and a booklet with all of the lyrics. Interspersed among the interviews are choice classic photos and video footage, including a clip of "Country Boy" from back in the day.

Tearing It Up is an audiophile disc that also caters to video fans. Anyone with a decent home-theater setup deserves to try it out, but they should understand that the goal of all of the technical whistles and bells is to serve up some really fine music making in the best possible way!

Be sure to watch for: Randle Currie makes a huge impression on pedal steel through this album, but on "Restless" he plays a virtuoso riff that simply amazes. He can keep up with the fleet-fingered Lee note for note, and that's quite an achievement!