Portable Bluetooth speakers come in all sizes and shapes, but Grace Digital has come up with a unique design for its EcoEdge model -- basically, a square box with big, protruding, squared-off corners that Grace calls bumpers. In Grace’s ads, the EcoEdge’s main selling point is its claimed toughness, and it looks the part -- like a bulldog pup. At $79.99 USD, it might well appeal to a user who wants a small, virtually indestructible Bluetooth speaker but isn’t picky about sound quality.

The front of the EcoEdge’s colorful cardboard box bears a three-quarter-size image of the speaker itself. On the sides are listed the features and specifications, while the back shows an upended view of the speaker with a balloon and arrow indicating one of its unique features: a bottle opener. The box, like the speaker, is rugged. 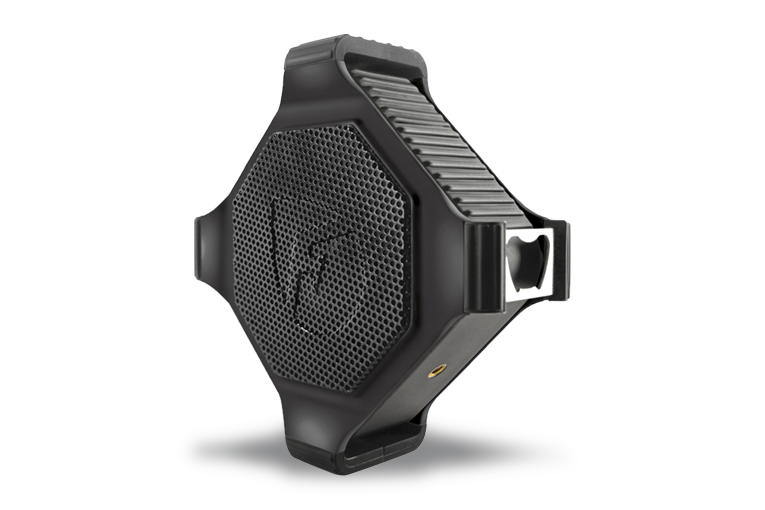 Inside, the speaker is secured with a Styrofoam standoff. In plastic baggies are a carabineer clip that can be screwed into the 1/4” universal mount on the bottom of the speaker, and a USB-to-Micro-USB charging cord. Also included are a warranty card and a small, very useful User Guide printed on heavy paper.

The EcoEdge measures 5.5”W x 5.5”H x 2.3”D and weighs 17 ounces. The standard color is black; add $10 for blue. It has big, thick feet of black rubberized plastic on all four bumpers, and between the bumpers are side panels of the same material. (The bottle opener is on the right bottom bumper.) The speaker’s build felt so solid that I had no fear of dropping it from a height of 5’ onto a hardwood floor. No damage. It’s also waterproof and dustproof, with an IP67 rating. And it floats.

On one side panel is a tethered hatch that covers a waterproof compartment containing the master on/off switch, the Micro-USB charging jack, and a 3.5mm auxiliary jack for using non-Bluetooth devices. (The EcoEdge is not waterproof as long as this hatch remains open.) On the hatch is a sticker warning the user against charging the EcoEdge while it’s still wet. The front and back panels are covered with octagonal grilles of hard plastic; under these are a 3” driver on the front and a 3” passive radiator on the back.

On the top panel are nine rubberized pushbuttons, none of them backlit. From left to right, these are for: on/off, Bluetooth pairing and EcoConnect (speaker pairing), volume up and down, next and previous track, and play/pause and EcoTalk (voice assistant). EcoConnect lets you set up two EcoEdges for stereo sound without the use of an app. EcoTalk lets you verbally communicate with your device -- push this button and the EcoEdge picks up your voice commands with its built-in microphone and sends them along to your device’s voice assistant. 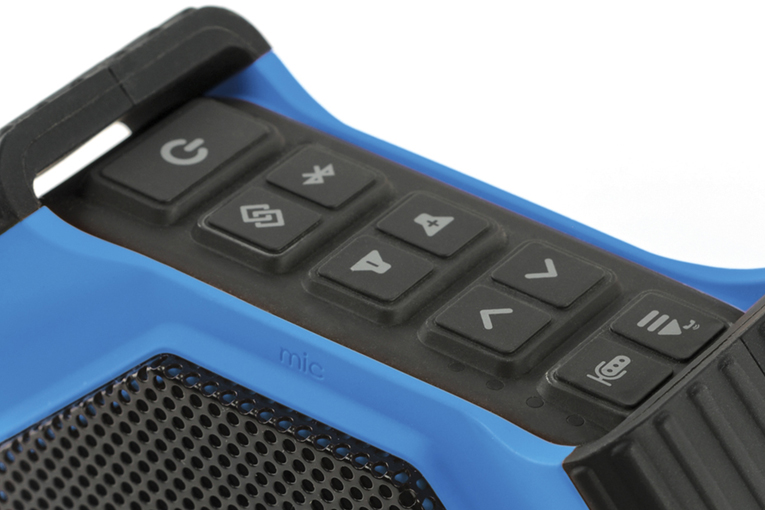 On the top panel are also six LEDs. A green one above the on/off button indicates power on; the LED above the Bluetooth button flashes blue while connecting, then solid blue when connection is completed; and at bottom right is a row of four green LEDs indicating the level of battery charge.

Grace provides a few specifications for the EcoEdge: a power output of 20W, a frequency response of 125Hz-18kHz, Bluetooth 4.2 compatibility, a charging time of approximately three hours, and more than 20 hours of use on a full battery charge, depending on playback volume.

The EcoEdge was relatively easy to use, but had a few quirks I had to get used to. On the positive side, it paired quickly and easily with my Benji portable music player. But whenever it’s turned on or off or has completed pairing, it tells you so with a voice announcement. This I could have done without, preferring the purely musical tones used by other makers of Bluetooth speakers. A minor annoyance.

There are many ways to pick up and carry the EcoEdge in one hand, including by its carbineer clip, but I never found one that felt entirely comfortable. The universal mount is a nice idea -- I can imagine affixing an EcoEdge to a bike’s handlebars or the prow of a canoe, as pictured in EcoXGear ads. The clip makes it easy to attach to a backpack or belt, but the EcoEdge is sturdy enough that you can toss it around almost anywhere. 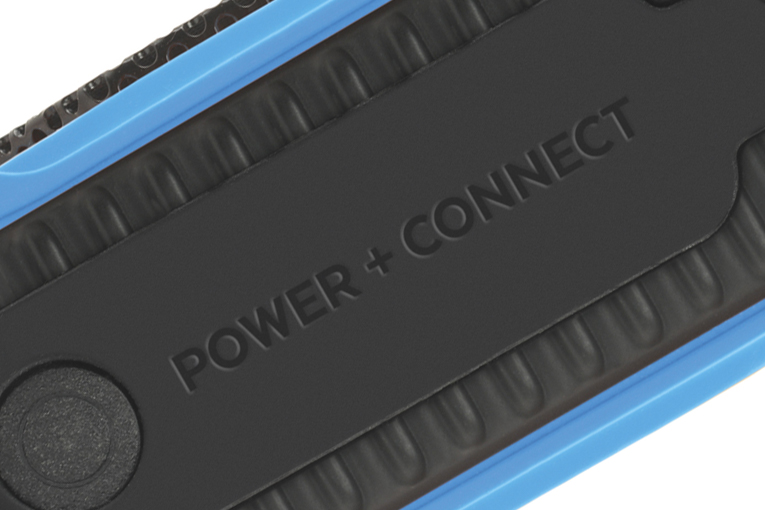 I had to press the pushbuttons pretty hard before they would engage -- something to do with the speaker’s waterproofing, I imagine -- but each did what it was supposed to do. I didn’t have two EcoEdges and so couldn’t try the EcoConnect feature, but the instructions in the manual make the pairing process sound relatively simple: Push the EcoConnect button on each speaker, then let them work it out between them. Along the way are a number of voice prompts, and the speakers revert to single-speaker mono play after they’ve been turned off and back on again. If you want stereo sound, you must repeat the pairing process each time you turn the speakers on.

I was a little annoyed at the LEDs. The green power-on and blue Bluetooth LEDs remain on, as do the battery-charge indicators. These LEDs are small enough not to be intrusive, but I’d have appreciated the option of turning them off.

Grace promises a range of Bluetooth operation of 100’, but in my house I got only about 28’ -- no doubt the results would have been better outdoors, where there’s less in the signal’s way. A full battery charge lasted about 11 hours of play at a fairly high volume, and the charge time was just about the promised three hours.

The bottle opener worked fine. No problems there.

The EcoEdge’s sound was largely in the midrange, with the lows and highs slightly attenuated. This made for a boxier sound than I would have preferred. My guess is that this would not be as much of a problem if you were using two EcoEdges. It played pretty loudly. I could easily hear it in the shower, and it should be able to compete well with the sounds of rushing air or water.

The title track of the soundtrack of the Beatles’ film Yellow Submarine (16-bit/44.1kHz ALAC, Apple) is very busy, with all sorts of percussion and sound effects. The EcoEdge got the basic thrust of the voices, but fine details went sadly missing, and the overall effect was a bit harsh.

The title track of Emmylou Harris’s Wrecking Ball (16/44.1 ALAC, Warner Bros.) fared no better. The song is thickly arranged and mixed, with an incessant drumbeat and Harris’s voice front and center. The EcoEdge’s reproduction of it reminded me of the roller-rink music of my long-ago youth: muddy and somewhat indistinct (except for that drumbeat), with Harris’s voice fairly strident. 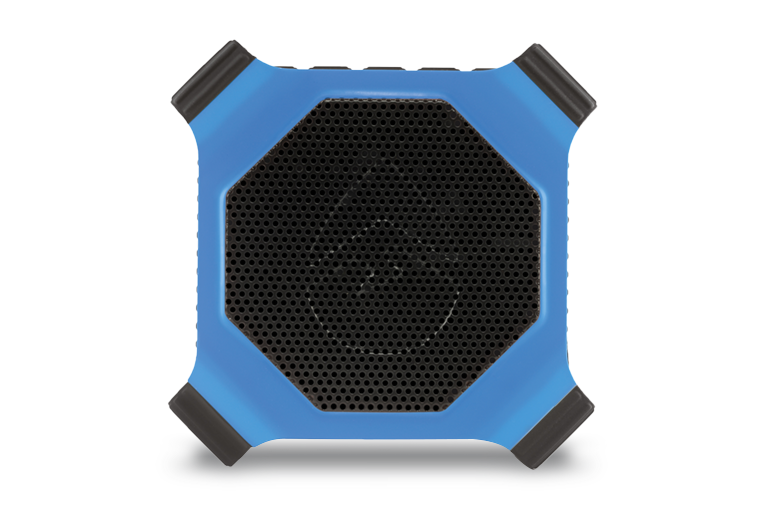 It was at this point that I discovered that the EcoEdge sounded much better from afar than at close range. Listening at a distance softened much of the harshness, but improved clarity only a tiny bit. Mel Tormé’s voice on Tormé (16/44.1 ALAC, Verve) sounded mellow and true, and the clarity in sparsely scored passages was quite good. But the minute Marty Paich unleashed his big band’s big sound, things got a little iffy again.

Harshness and a lack of transparency also plagued the EcoEdge’s reproduction of classical recordings, though the bravura final movement of Tchaikovsky’s Symphony No.4, with all its cymbal crashes and blazing brass, sounded better than I’d expected in the recording with Vladimir Jurowski conducting the London Philharmonic (16/44.1 ALAC, LPO). The orchestra had a solid sound, but the cymbals didn’t shimmer as they should.

Grace Digital’s ExoXGear EcoEdge has a lot going for it. It’s sturdy as a rock, it’s waterproof, and it can be connected to another EcoEdge for stereo sound. But its sound quality is only adequate. It will be good enough for the casual listener who wants only background music loud enough to punch through ambient noise, but it will disappoint anyone else. If you’ve read my previous reviews of Grace Digital products, you know that I think they make wonderful-sounding Bluetooth speakers. They’re entitled to one misfire -- possibly becoming, in this case, their own competition.