Sbode is a subsidiary of Chinese manufacturer Shenzhen Sbode Technology Co., Ltd., and their products are sold in the US exclusively on Sbode’s own website and on Amazon.com. The M400 Bluetooth speaker, despite its low price of $49.99 USD, offers more whistles and bells than speakers costing a lot more, and even has an FM radio. I was eager to see if all of its functions actually worked, and they did. But what about the sound quality? 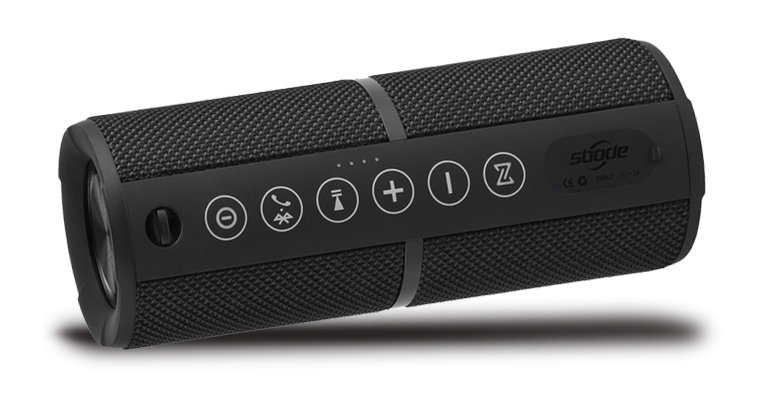 For $49.99, you might expect the M400 to come in a finger-ripping plastic clamshell. But this little speaker arrives in a package of near cigar-box fitness and with a magnetic clasp. On three sides of this box are 3/4-scale photos of the M400, one with splashes of water to indicate its water resistance; on a fourth side is a list of its features. Lift the lid to find the speaker contained in a plastic sandwich: the lower half black, the upper half transparent. Lift off the upper half and there’s the M400: simple, neat, user-friendly.

In addition to the M400 itself are a USB-to-Micro-USB charging cable, and a 3.5mm audio cable for connecting a non-Bluetooth source device. A pamphlet that at first glance looks like a dreaded “quick start” guide turns out to be an honest-to-goodness, thorough instruction manual -- something unexpected at this price. 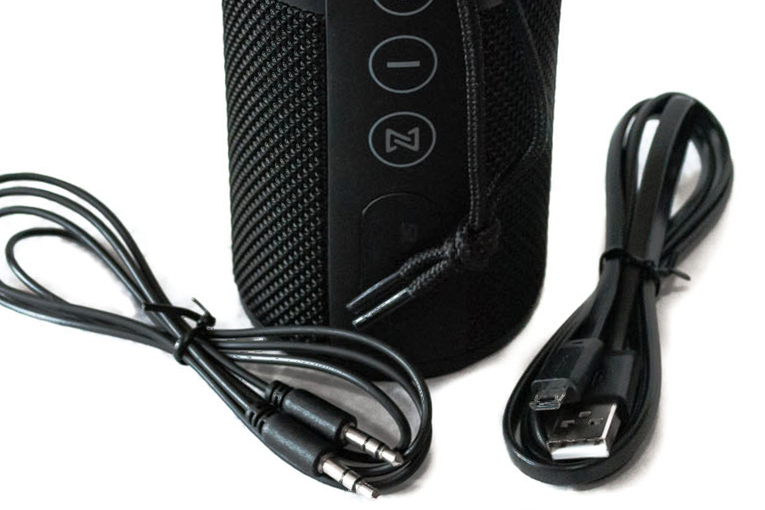 Most of the M400’s surface is covered by a fine lattice, unbroken except for a thin, recessed bellyband and, on the front, a vertical rubberized strip. On that strip are all of the M400’s controls, as well as a bay with a tightly sealed cover. Inside this are the Micro-USB charger jack, the 3.5mm audio jack, and a slot for a microSD card. Pre-recorded cards can be played, so long as the files on them are in MP3, WMA, FLAC, or APE format (sorry, no ALAC). When connected to a computer, the M400 can also serve as a card reader.

Attached to the top of the control strip is a carrying cord that lets you hang the M400 just about anywhere. The controls themselves are easy to see and clearly marked. They’re perfectly flush with the surface of the strip -- you can’t find them by touch -- but give a reassuring click when pressed. 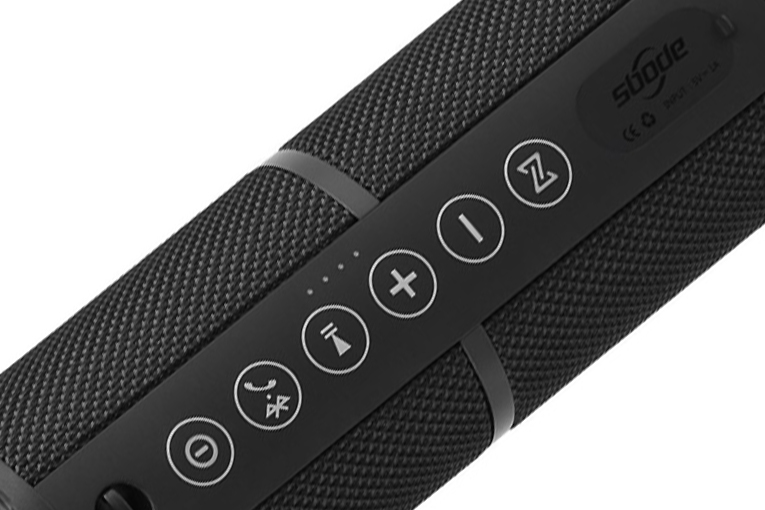 As usual with most new equipment of this type, each button has multiple functions, depending on whether it’s given a long or a short push. From top to bottom, they are: Power/Input, Telephone (Receive/Reject/Connect Previous Call), Play/Pause, Up/Next (Volume/Track/FM Station), Down/Previous (Volume/Track/FM Station), and TWS (for True Wireless Stereo). If you have two M400s, TWS acts as a pairing button, to enable stereo listening. To the right of these buttons are four small, orange LEDs that indicate the status of the battery charge. These LEDs come on every time you power up the M400. Almost all of the functions are backed up not only by the click of the switch, but by voice prompts.

The M400 has two small drivers that fire to the rear, and at each end of the speaker is a passive radiator bearing the Sbode logo. Bluetooth v4.2 is used, and the speaker’s impedance is 4 ohms.

The M400 was a gadget guru’s joy to use. Powered up for the first time, it automatically goes into Bluetooth pairing mode. Select it on your Bluetooth device and it quickly pairs. Sbode had sent me two M400s, so the next thing I did was set them up for stereo listening: Turn the second speaker on and push its TWS button. After a few seconds of conversation between the two M400s, you’ll hear a beep, then everything goes silent for a moment, then the sound comes back as stereo. To be sure your pair of M400s is set up correctly, the TWS button on the left speaker will now be backlit blue, and the TWS button on the right will be backlit orange.

The Play and Fast-Forward functions worked as they should, as did Volume Up/Down. Short pressings of the Power button let me cycle through three inputs: Bluetooth, FM Radio, and Auxiliary. (There would have been a fourth choice of input had I inserted a microSD card, but everything on my cards is formatted ALAC, which the M400 doesn’t support.) Few Bluetooth speakers include an FM tuner, and it’s nice that the M400 does, but it has limitations: There’s no tuning dial or way to set presets. You have to tune in the next station using the multipurpose Up/Down buttons. On the plus side, the M400’s reception was very good, especially considering the hilly terrain I live in. 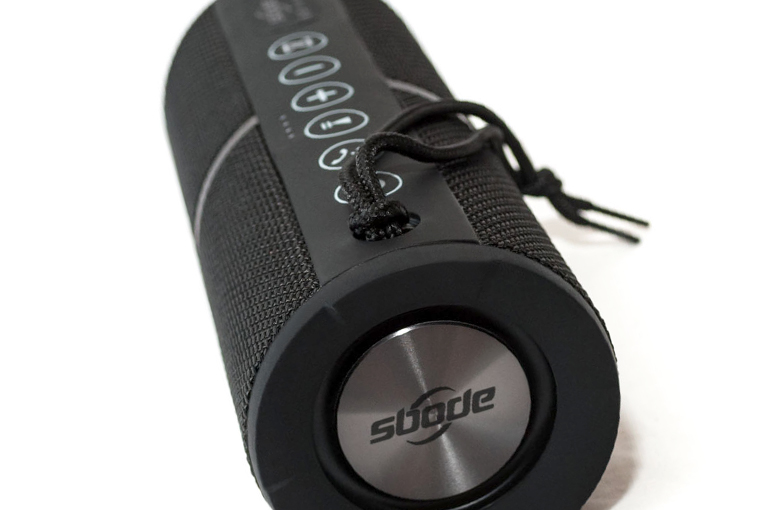 Bluetooth range was about 25’ -- average for my cluttered house. Sbode says that the M400 is splashproof, but cautions that it shouldn’t be submerged. I took one of them into the shower with me, and it did just fine -- no damage.

At first, I placed the M400s so that their controls faced me, thinking that their circular design would allow them to sound the same in any position. They didn’t. The drivers are more directional than is usual -- I had to turn the M400s around until their controls were facing away and the drivers were firing toward me. In addition to better sound, an advantage of this was that the brightly lit power and TWS buttons were now hidden from view.

Positioned correctly, the M400s had an overall pleasant sound, with a clear midrange but somewhat rolled-off highs and lows. The lack of bass is understandable -- these are tiny speakers -- but the softened highs were a puzzle, considering how many Bluetooth speakers sound too bright. These are the first I’ve reviewed that could stand to sound a bit brighter, though that depended on the recording. Recordings that sound too bright through other portables were OK through the Sbodes; better-balanced recordings were a bit mushy in the highs. 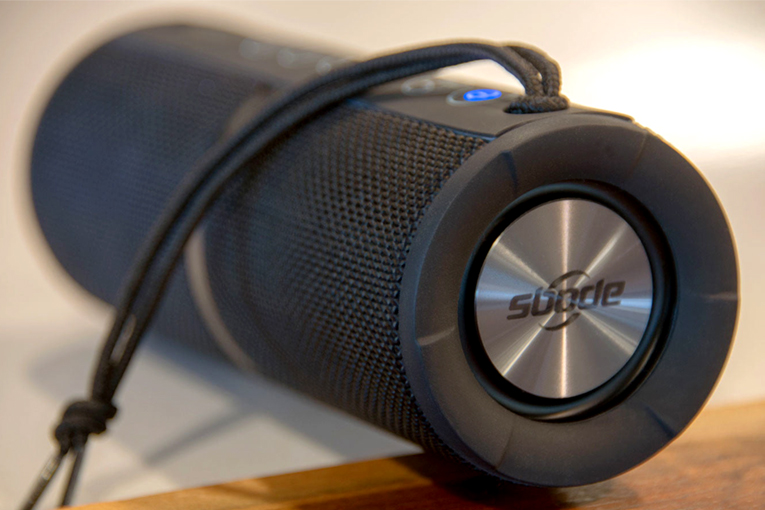 Paul Simon’s You’re the One (16-bit/44.1kHz FLAC, Warner Bros.) is, in my opinion, the best of his mid-career albums. Most of the songs have ostinato percussion tracks -- bongos, wood blocks, etc. Though the voices came through just fine with the M400s, the percussion was subdued and lacked focus, nor was there enough bass.

“Crying in My Sleep,” from Art Garfunkel’s Watermark (16/44.1 FLAC, Sony), an album of (mostly) songs by Jimmy Webb, fared a bit better, as it primarily features the midrange. But even here, I could’ve used a bit more crispness and transparency in the drum licks.

Vivaldi’s sets of concerti grossi, L’Estro Armonico, with Neville Marriner leading the Academy of St Martin-in-the-Fields (16/44.1 FLAC, Argo), definitely sounded better -- the solo violin and small chamber orchestra didn’t place such great demands on the speakers. Still, I sensed a lack of presence; it all sounded a bit dull. 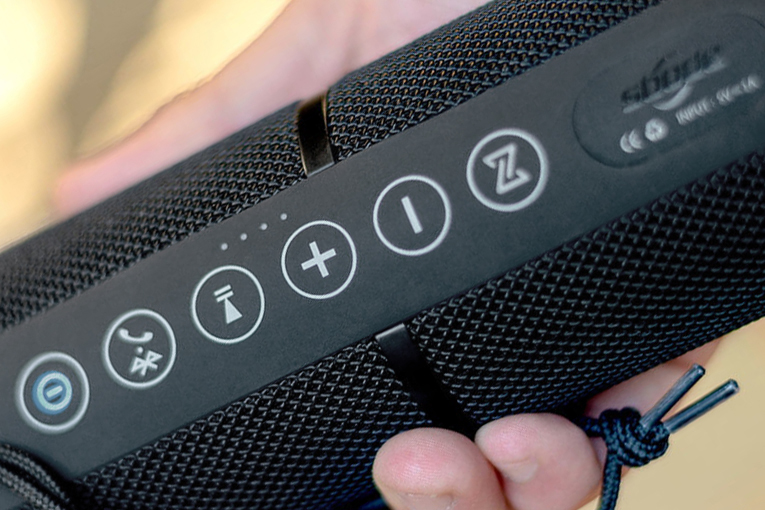 Overall, the Sbode M400s couldn’t satisfactorily reproduce the highs and lows I need and that I know these recordings possess. Regardless of the type of music, it was as if a veil had been dropped down between me and the musicians.

The Sbode M400 is an attractive-looking speaker loaded with special features, all of which work well and are fun to use. But its overall sound lacked focus, bass, and high-frequency presence -- in terms of sound quality, it can’t compete with other small Bluetooth speakers, such as JBL’s Clip. Sbode claims in its press releases that they strive to “design, develop and manufacture Fashionable, Reliable & Affordable” electronics. They’ve done that in the M400 -- but if they added “that sound terrific,” and if the M400 met that description, it and they would be forces to reckon with.