It’s impossible to discuss Grace Digital’s Mondo+ without thinking of the Logitech Squeezebox Touch. Though the Logitech was discontinued three years ago, its fans are legion, and still populate several websites on which they share ideas about how to tweak its performance and the like. The Squeezebox Touch is a great little device, and it’s still what I mostly use to stream files from my computer. The Grace Mondo+ won’t win in a head-to-head competition, no foul -- it was primarily designed for use as an Internet radio. 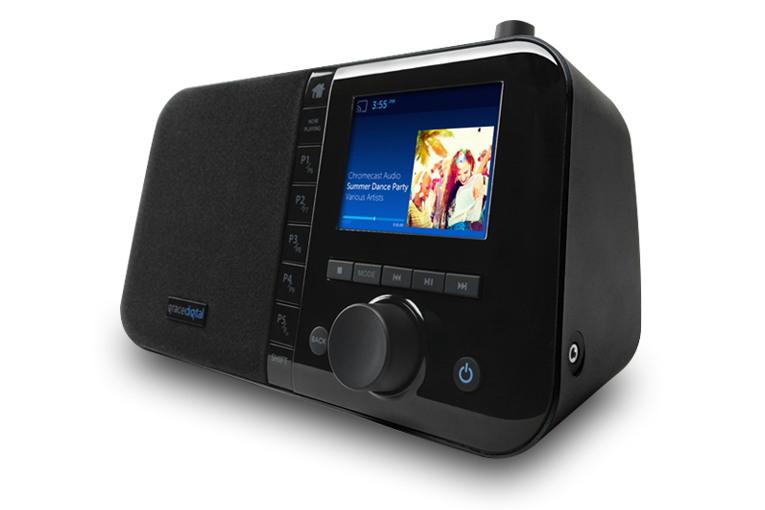 The Mondo+ comes in a colorful box with a power cord and transformer, a remote control with batteries, a thorough 52-page manual, and an audio cable with RCA plugs at one end and a 3.5mm jack at the other. The Mondo+ measures 10.75”W x 6”H x 5.25”D, and is available in one of four matte finishes: black, gray, red, or white. (The previous, glossy finishes turned out to be magnets for fingerprint and dirt.) It lists for $199.99 USD, but can be found for less; a battery can be bought separately for $19.99 at Amazon.

Like the original Mondo, the Mondo+’s appearance is somewhat retro -- it looks like a radio you might have found in almost any US kitchen of the 1940s, ’50s, and ’60s. The front is in two halves: speakers on the left, behind a grille; and, on the right, controls and display. The 3” x 2” screen isn’t a touchscreen, but it’s full color and produces high-resolution images. Album covers are displayed about three-fourths the size they appear on the Squeezebox Touch’s display. Below the screen is a row of five buttons, the name of each appearing at the bottom of the screen and changing with the menu selected. Centered below these, between the Back and On/Off buttons, is a large dial that looks like a volume control. Instead, turning it takes you through various screen icons. Push it in to select an action. Pressing Back returns you to whatever the previous screen was.

To the left of all this, running the height of the front panel, is a column of eight buttons. From the top down, these are: Home, Now Playing (displays information about the station and title selected), Presets 1 through 5 (for storing favorite stations), and, at the bottom, Shift, which doubles the number of presets to ten.

On the back are jacks for USB input, RCA stereo line out, power, and Aux In, the last allowing you to connect devices that lack Bluetooth or casting methods of connection. Near the top is a recess that can be used as a handle. Low on the right side panel, toward the front, is a 3.5mm headphone jack. The Mondo+ can also be wired to the Internet via an optional USB-to-Ethernet dongle. 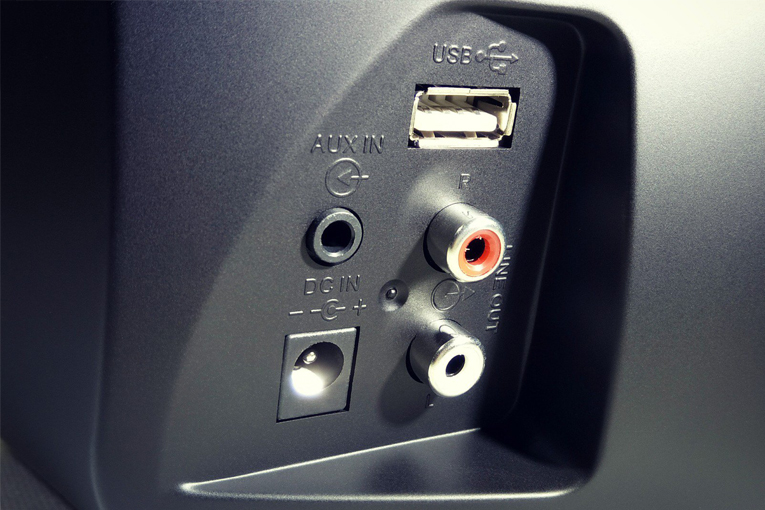 So, where’s the volume control? It’s the small knob sticking out of the top panel, at the right. Next to it is a Snooze button, with which the Mondo+ can be used as an alarm clock. Five different alarm times can be active simultaneously.

Grace’s illustrated manual made setup simple. When I first turned on the Mondo+, its screen guided me through the process of connecting it to my Wi-Fi network. First I had to decide whether to use a Wi-Fi or Ethernet connection. I chose wireless, and the Mondo+ scanned for available networks. I selected mine, entered the password, and the Mondo+ did the rest.

The next thing displayed on the screen was the Mondo+’s Home page: icons for Internet Radio, Music Services, Media Player, Radio Set Up, Aux In, and Alarms. Internet Radio takes you to various submenus that give you many ways to find stations, of which the Mondo+ can access more than 30,000, says Grace. Music, talk, sports -- you can find stations for almost any taste. I found several devoted to brass-band music 24/7. Some stations require a membership, but most don’t. Music Services takes you to programming like Sirius or BBC. Sirius requires a paid membership, but BBC and most of the rest are free.

Media Player connects with the music stored on my computer. This requires UPnP. I had difficulty with this setting, but it was my computer setup that was at fault, not the Grace. A caveat: If your library of files is large -- I have 30,000 albums -- they’re not held in cache, and so must be reloaded every time you turn off and reboot the Mondo+. It will, however, be saved if you push the Back button, then go forward again. Aux In allowed me to enable that jack for connection. 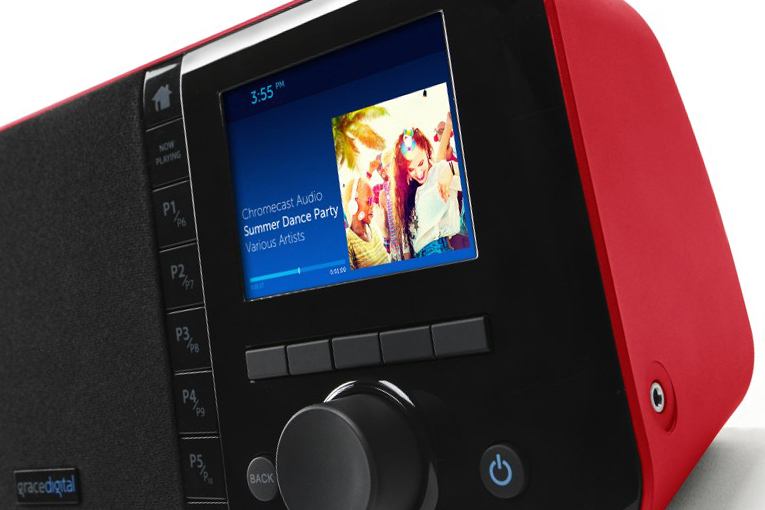 Radio Setup gave me many options, including screen brightness, Bluetooth, equalization, and firmware update. The Mondo+’s software remains a work in progress -- when I set up the review sample, an update was available. Bluetooth connection was relatively simple. The alarm clock lets you set five different alarm times with your choice of wake-up material and volume. I could set the first alarm for 10 a.m. with West Virginia Public Radio, and the second alarm for 3 p.m. and one of the Sirius channels. Once I’d set wake-up times and channels, I could easily turn the alarm on or off. If you like to listen as you fall asleep, you can set the Mondo+ to automatically go silent after a set number of minutes.

All in all, the Mondo+ was fun to use, with neat surprises popping up here and there. For example, when playing a channel, press Now Playing to display that track’s artist, title, bit depth, and sampling rate. The Grace includes built-in Google Chromecast, permitting easy connection to other Chromecast devices. Spotify Premium is supported. And My Mix lets you set up channels as you wish to hear them; e.g., you can program a music station so that you hear only the music, not the announcements.

The battery bay is accessible through an easily opened hatch in the bottom panel, and the wiring harness fits only one way; it would be hard to screw up installation. I recommend that you buy the backup battery when you buy the Mondo+ and install it. Having a battery allows much more freedom of movement when using the radio.

The Mondo+’s 3” woofer and 1” tweeter, powered by a 12W class-D amplifier, provided what you might expect from a radio of this size -- the sound mostly centered on the midrange, with more bass than is usual from table radios, and with more sparkling highs than I’ve heard from most portables. Overall, the sound had an appealing clarity with most music I played. The Mondo+ was more than adequate for most music, but was always outstanding for talk radio, where it really shone.

Music sounded best through analog RCA cables run from the Mondo+ to my preamplifier-processor. Grace has included a very good DAC -- the sound files on my computer were reproduced with excellent fidelity. Internet radio fluctuated greatly in quality, through both outboard speakers and the Grace’s own. I was pleased to hear that many stations had upgraded their content since I’d last tuned them in. Sirius’s Coffeehouse channel proved to be an especially good listen. 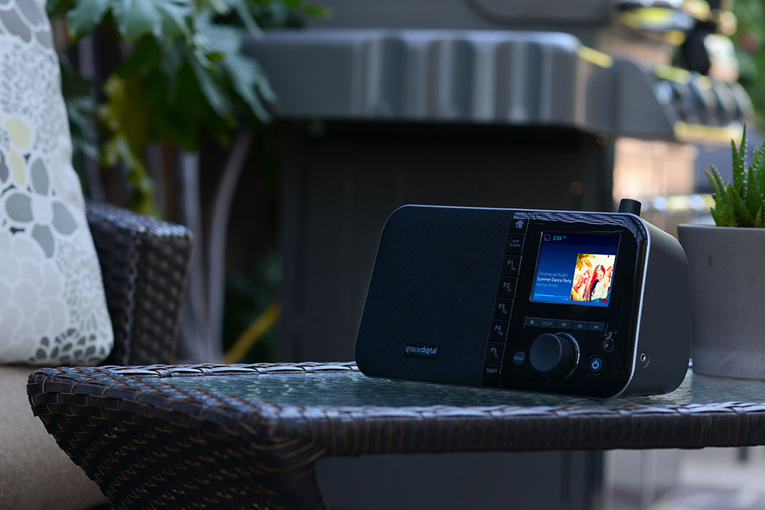 The Mondo+ far surpassed the Squeezebox Touch in flexibility and features, but in terms of sound through external speakers, the Logitech still held a slight edge (through their own speakers, they were about the same). The choice will depend on what you prefer: the Mondo+’s sound was more transparent; the Squeezebox Touch offered slightly better bass and more robust overall sound.

Rachmaninoff’s Symphony No.2, full of lush writing for strings, poignant woodwind solos, and pungent brass interjections, has become popular in recent decades. Sixty years ago, when I began collecting, only one or two recordings of the work were available; now it seems de rigueur for every upcoming conductor, with dozens of recordings in print, and one of the best is with Gianandrea Noseda conducting the BBC Philharmonic (24-bit/96kHz FLAC, Chandos). The Mondo+ seemed a little overwhelmed by it all.

On the other hand, the Dave Brubeck Quartet’s Time Out (16/44.1 ALAC, Columbia) benefited from the clarity afforded its widely separated channels. But the high percussion sounded mushy, and the bass sometimes a little unfocused. If you’re looking for a music player and are lucky enough to find a Squeezebox Touch (they’re still available used), go for it. This is not to discredit the Mondo+, which was, after all, brilliantly designed to be an Internet radio.

Let’s praise the Mondo+ for what it is: a superb, fun-to-use Internet radio with enough options to last a lifetime, and new ones being added via Wi-Fi at a rapid pace. With it, you can search out programming to suit your very specific individual tastes. It’s also one of the best clock radios out there. With the battery attached, it becomes truly portable, and would make a great asset to your music-everywhere collection