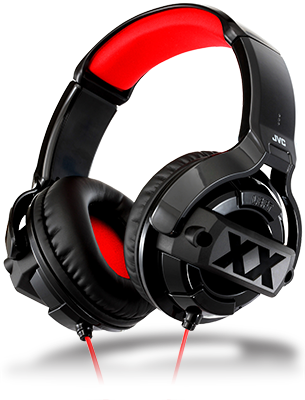 I’ve reviewed several headphones about the size of JVC’s HA-M55X Xtreme Xplosives, and most of them came with bells and whistles: carrying case, detachable cables, inline controls, and more. I wondered what it might be like to save money by buying a pair of basic over-the-ears headphones and using the controls of my iPod Touch rather than any on the headphones themselves.

The HA-M55Xes are packaged in a box that’s black except for the bright-red XX Xtreme Xplosives logo; through a wraparound plastic window, you can see the earcups. The simple hype on the box is for the 50mm drivers and an extreme-deep-bass port.

Inside are the headphones, bright red cables already permanently attached, with a warranty card and a page of warnings. There’s no user manual (you can get one online), or plug adapter for making the 3.5mm iPhone-compatible plug fit an older 1/4” jack, and no case. You do get a low price. The HA-M55Xes cost $49.95 USD, but for slightly more you can get the HA-MR55Xes, which have an inline remote control. Or double the price and get the larger HA-MR77Xes, which have 57mm drivers and the inline remote control. The XX line also includes two in-ear models.

I found the appearance of the Xtreme Xplosives awesome and more than a little sexy. The metal headband is cushioned with foam and covered in plastic, the earcups are glossy black plastic, and the XX logo blazes out on a raised crosspiece. The cups’ foam padding is covered with a leather-like plastic, and the driver covers are red to match the headband -- as are the cords, which terminate in a substantial 3.5mm plug. The positions of the earcups are adjustable with detents; you can adjust the ’phones to fit your head, and they’ll stay that way. It’s odd that if you have the adjustment all the way in and shake the ’phones, one or the other earcup will then extend to full length; but set them to any detent in between, and only violent shaking will cause them to lose the setting.

The earcups are clearly marked Left and Right in big letters, and are also marked in braille just above the JVC logo. Once the ’phones were on, they stayed on, with no hint that they might fall off, even when I held my head at extreme angles. The 3.94’ cord was more than long enough for my needs.

I would have preferred that the connections to each earcup be more substantial. Of course, if one snaps, you’ll have a devil of a time getting it fixed. I have the feeling that JVC might consider these a throwaway item: If they break, you just replace them. But given even moderate care, I think the HA-M55Xes should last a long time -- they felt light and solid.

The HA-M55Xes’ frequency response is listed as 8Hz-23kHz, the nominal impedance 36 ohms, the sensitivity 107dB/1mW, and the maximum input capacity 1000mW (IEC).

The HA-M55X headphones were easy to position on my head. They’re true over-the-ear ’phones: all of each of my ears was encompassed by its earcup’s pad. One good result of this was that the pads were somewhat effective at screening outside noise. They didn’t come anywhere near the effects of noise-canceling ’phones, and the bleeding of sound from the JVCs indicated that they might not be the headphones to wear when you’re close to others. Of course, that will have a lot to do with how loudly you listen.

The JVCs were much more comfortable than many headphones of their size, and it was a good 30 to 45 minutes before perspiration began to be a problem. 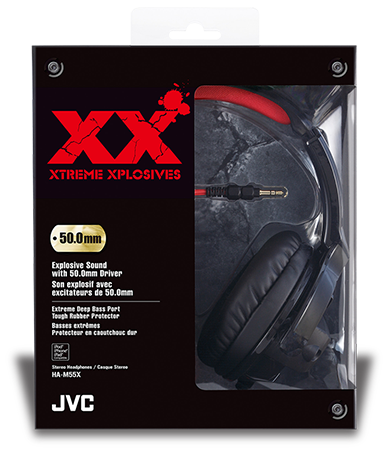 Since the HA-M55Xes have no controls, I expected to have to fiddle with the many presets on my iPod Touch. But after trying just about every one, from Rock to Classical, I found that Flat worked best for all types of music. JVC got the balances right.

Given their large drivers and bass port, I expected the Xtreme Xplosives to have good bass. I wasn’t disappointed. About halfway through Art Garfunkel’s cover of Paul Williams’s “Traveling Boy,” from Garfunkel’s Angel Clare (16-bit/44.1kHz ALAC, Columbia), I jumped at the sound of some low synthesizer bass. I often use this track to check out headphones, and none so far has reproduced the depth and volume of bass that the JVCs did. The bass-drum strokes in Ataulfo Argenta and the London Symphony’s recording of Chabrier’s España (16/44.1 ALAC, Decca) were sure and true -- and it sounded like a big bass drum.

The bass line in the title track of Michael Jackson’s Bad (16/44.1 ALAC, Epic) had terrific presence, and was as clean and clear as one could want. The same went for “Une Nuit à Paris,” from 10cc’s The Original Soundtrack (16/44.1 ALAC, Universal/Mobile Fidelity Sound Lab).

All this great bass was not out of proportion with the rest of the audioband. The cymbal brushstrokes in “Une Nuit à Paris” were as crisp and pointed as I’ve ever heard. And with every single recording I tried, there was a transparency that let me listen “into” an ensemble to hear inner voices that are often merely a suggested blur through other headphones. If I heard something I didn’t like so much, I generally found out that it was a deficiency in the original recording.

In short, with these cans, there was no mud. None at all. Moreover, the HA-M55Xes could play loud without distortion. I had my iPod Touch’s volume set to about 75% -- any more would have deafened me.

What’s not to like? That JVC can do all this for only $50 is an incredible feat.

If you don’t need frills and are looking for stylish headphones with solid bass and that sound terrific with any kind of music, JVC’s HA-M55X Xtreme Xplosives ought to do the trick -- and their low price will leave you a lot of cash to spend on tunes.