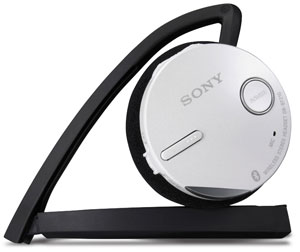 If you buy this Sony headset and transmitter together ($149.99 USD), you'll find in the box a headset, the Bluetooth transmitter, an AC power adapter and charging cord, an instruction book, and a warranty card. The Sony DR-BT21G headset ($99.99 separately) is incredibly light at just 2.1 ounces. The headphone cups are covered in foam, and are 2" in diameter and about 0.75" thick. The left cup contains a plug for the charging cord, and the right sports four switches, for: power; a rocker for volume up/down; one for track skip forward/back and pause/play; and one to receive and send telephone calls. Each side of the neckband folds in, to bring the headset down to space-saving dimensions of only 3.5" x 3.5" x 2.75". Although Sony provides no case (a complaint of many buyers), in the camera department of Walmart you'll find a 5.5" x 4" x 2.5" Case Logic case that will perfectly accommodate the DR-BT21G. (The case stretches in the middle for a snug fit, to protect the 'phones and keep them from rattling around.) 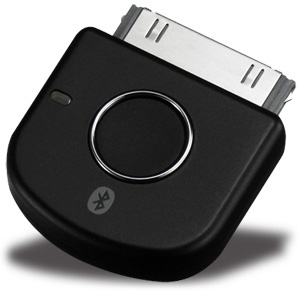 The TMR-BT8IP Bluetooth dongle-type transmitter ($69.99 separately) weighs 0.1 oz. and measures 1" x 1.4" (including connector). Designed to function with most models of Apple's iTouch, iPhone, iPod, and iPod Nano, it has the requisite 30-pin connector and clicks firmly in place -- once it's properly plugged in, there's no possibility it will come loose or shake free. The dongle slips easily into the same case you'll need to get for the headphones, and is all the more reason to buy that case. You don't want something as small as this transmitter lying around loose, where it's sure to be lost.

Setting up the DR-BT21G headphones proved far simpler than I would have thought. You depress the power button until blue and red lights blink twice in unison, and wait for the blue light to start blinking. Put the headphones on, click the transmitter into your portable music player, and push its large button until it flashes blue. Wait about five seconds -- you'll hear a beep, and then whatever music you've set up on your player. This process is called pairing -- though I've heard nightmare stories about getting other pairs of components to communicate with each other, the Sony transmitter made this a snap. I've used the headphones for some 24 workouts now, and it hasn't missed connecting once.

The headphones were light, and fit snugly enough for exercise without feeling tight. The cups fit my ears well, blocking much extraneous noise. But remember, these are not noise-canceling headphones; perhaps you could call them noise-reducing. They sounded good; the bass -- so important for gym and running motivation -- was tight and ample without sounding boomy. The midrange sounded natural, and the highs had presence without the shrillness that curses so many sports headphones, wired or wireless.

The skip and pause controls worked well. Once I'd begun an album, I could control the tracks from the headset. But you can control the volume only from the headset -- the volume control on your iPod Nano won't work. The headset, like all Bluetooth units I've tried, has a maximum cutoff point. You increase the volume setting until you hear a ding, after which you can go no further. I found the level on the Sony quite loud enough for most albums, if not all. Bach didn't work at the gym, but I hadn't expected it to.

The range was quite acceptable -- about 30'. I was able to put the transmitter on the trainer's desk, which is at about the midpoint of my gym, and walk around 85% of the gym without losing the signal. The charging capability is quite remarkable. Sony claims up to 11 hours of music and communication time, with up to 100 hours of standby time. But these 'phones have never run out of power for me, though I do charge them after every third workout, just to be sure.

Speaking of power brings me to some of the less-desirable qualities of the Sony headset and transmitter. Plugged into a portable music player's 30-pin jack, the transmitter draws its power from that source -- and it draws like crazy. My workouts usually last 90 to 100 minutes, and by the time I've finished, the headphones might be good for two or three more sessions -- but my iPod Nano's battery has been drained by three-fourths, and must be charged before I work out again. In a way, this is no big deal. I've never run out of power during a workout, and have gotten in the habit of parking the Nano in my iDapt charging dock every time I come in from the gym or before I go to bed.

A more serious problem is the headset's high noise level, which varies with the volume setting. Listening to heavy rock at the gym, you won't notice it so much, but you'll be aware that it's there, sounding very much like tinnitus. I'm sure this problem wasn't specific to my unit -- many user-comment reviews have mentioned it as well. From time to time, there are also curious dropouts. These didn't occur on that walk around the gym, but when performing some exercise motion such as an ab crunch or a lat pulldown. My use of other headsets has told me that this is not a transmitter but a headset problem.

Back home, I tried the Sony headset and transmitter with my iTouch. The results were comparable to what I'd experienced with the iPod Nano, with one big plus. I subscribe to Netflix's streaming service, and was able to watch movies on the iTouch and get pretty terrific sound -- way better than the iTouch could provide on its own. This could come in handy in a household with more than one person. One could go to bed, while the other could watch movies without making a sound.

Even taking into consideration the problems I encountered with the Sony duo, I still much preferred it to any wired headsets I've used.

The Sony TMR-BT8IP Bluetooth transmitter is outstanding. The only problem is that it draws significant amounts of power from its host unit. (That can be compensated for with regular recharging, and the good news is that the TMR-BT8IP itself then doesn't need to be charged.) It takes up very little space, and it pairs and performs flawlessly. Because Sony still has a few problems to fix in the DR-BT21G headset, it was good to learn that the transmitter will work with other headsets. I tried several, and discovered the jWIN JB-TH710. 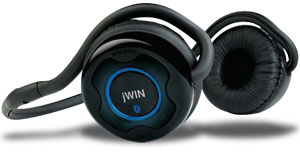 The jWIN has earcups about the size of the Sony's, but with much more padding. Though the full diameter of each cup is 2", the diameter of the actual delivery area is only about 1". Needless to say, these 'phones blocked out more extraneous sound than did the Sony, though they, too, do not block noise completely (a good thing if you're running in traffic and don't want to be hit by vehicles, including bicycles). Still, I experienced more quiet, and thus more music. There was no background noise, as with the Sony, and the reproduction was very good.

There was plenty of tight bass in Cake's Comfort Eagle (Apple Lossless file from Columbia CK 62132). The sound seemed to have a little more presence overall than the Sony, which may or may not have been due to the greater acoustic isolation. The jWINs are a bit on the small side, which might bother those with larger heads, and, like most sport 'phones, they're not adjustable. They do, however, fold into a compact 4.5" x 2.5" x 1.5", and fit neatly into the case I'd bought for the Sony.

The jWIN comes with a USB charging cord, and its controls are grouped around an almost 1" on/off/pause button that's easy to find with your right hand. Its claimed charge time is even longer than the Sony's (20 hours active, 400 standby), and it was just as simple and quick to set up and pair. The headset never lost connection or dropped out, even when I strapped my Nano on my wrist, using Apple's new click-in-place band. I couldn't lose the connection under any circumstances, unless I got 30' away from the transmitter. And here's a great surprise: the jWIN 'phones can be found on the Internet for under $30.

The Sony components are sold separately. My recommendation, therefore, if you want to experience really good Bluetooth for sports until a more perfect combo comes along, is to purchase the jWIN 'phones and the Sony TMR-BT8IP transmitter, which can be found online at considerably less than list price. Assuming you already have a portable music player with a 30-pin connection, you'll be spending less than $100 to make it an indispensable sports buddy. Gym trainers talk about freedom of motion; Bluetooth components make that possible with music. Once Sony finds a way to make Bluetooth headphones free of noise and surer of connection, they, too, should be indispensable.