JBL continues to upgrade and update its models of portable Bluetooth speakers. The new Clip 4 offers some welcome new features while omitting some of the attractions of its predecessor, the Clip 3. At $69.95 USD it’s a bit pricey for its tiny size, but it can be found online for considerably less.

The Clip 4 comes in a plastic-clamshell-and-cardboard box that reveals the actual speaker, not a picture of it. It comes in Grey, Black, Squad (camouflage), Pink, Red, or Blue (teal). In the box is the speaker, a short USB-C charging cord, a quick-start guide, and safety and warranty information.

The Clip 4 measures 5.3″H x 3.4″W x 1.8″D and weighs just over 8 ounces. Whereas the Clip 3 is round, the Clip 4 is closer to oval. It’s covered, front and back, with grilles, and, as in the Clip 3, a metal carabiner wraps all the way around the speaker’s body. The carabiner is thicker and more durable than the Clip 3’s, and its loop is wider—it will easily fasten to larger objects. And, when fully depressed, the carabiner fits into a recess in the speaker’s body. 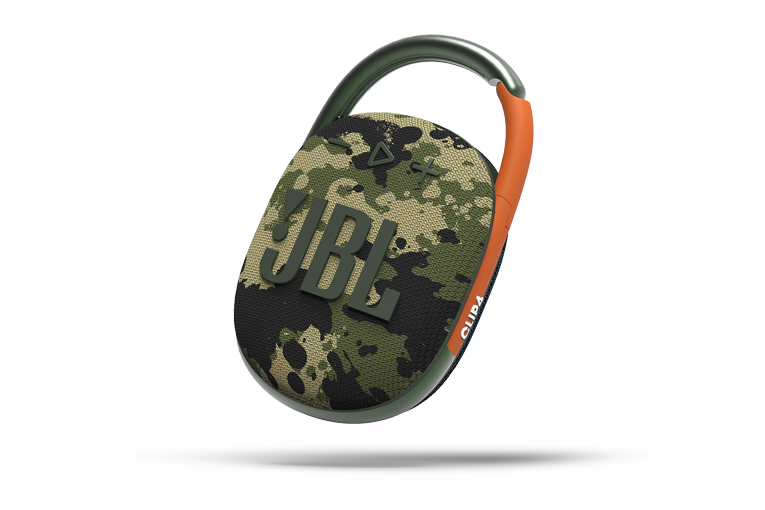 A 5W amp powers the Clip 4’s single 1.57″ driver. The Bluetooth version is 5.1, and the dustproof/waterproof rating is IP67. The specified playing time on a full battery charge is ten hours, depending on playback volume. All of these specs are slight improvements over the Clip 3’s—but the Clip 4 lacks the Clip 3’s auxiliary 3.5mm input and ability to connect with other JBL Bluetooth speakers.

The volume +/- and play/pause controls are on the front, just above a large, raised JBL logo that takes up much of the front grille. Tap play/pause twice to skip to the next track. The power and Bluetooth pairing buttons are along the left edge, toward the rear.

On the Clip 4’s bottom edge is a USB-C charging port that—amazingly enough for a waterproof speaker—is not sealed with a rubber cap. A tiny LED indicates the status of the battery charge. On the rear surface are diagonal strips of rubbery material to keep the speaker from walking itself around when laid on its back.

The Clip 4 paired almost instantly with my Apple iPod Touch, emitting JBL’s familiar ascending whoosh to let me know that it was paired and turned on. (When turned off, it emits a descending whoosh.) It comfortably fit in one palm, and I could easily operate it with the fingers of the same hand. I wish the power and pairing buttons were below the JBL logo on the front—there’s plenty of room—but that might have screwed up the Clip 4’s internal design. Who knows? It took just the right amount of pressure to activate the buttons. 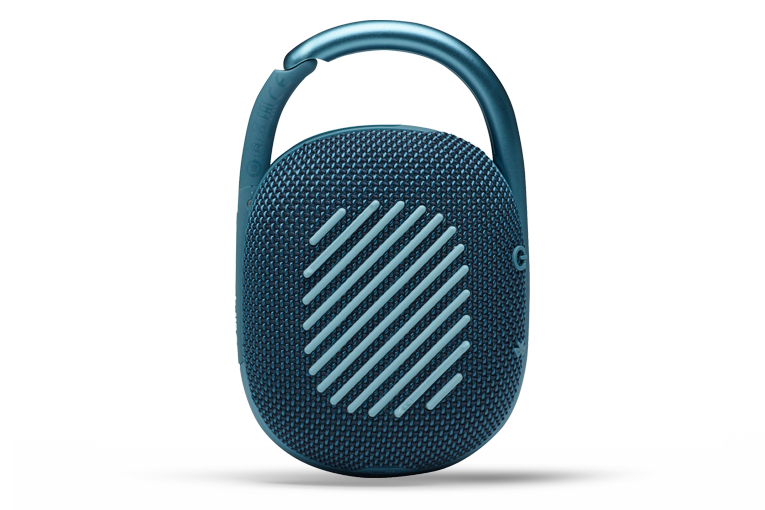 The rubber strips held the Clip 4 steady when laid on its back, and the carabiner secured it to whatever I clipped it to, including a belt loop on my jeans. Clip 4s clipped to backpacks are all over JBL’s promotional materials, but the speaker can be adapted to almost any location. And since it’s waterproof, it can be used in the shower.

That waterproofing spec of IP67 means that the Clip 4 can be fully immersed in 1m of water for up to 30 minutes without damage. However, JBL warns that chlorinated and/or salt water can corrode the speaker’s body over time. To avoid this, rinse the Clip 4 off in clear water after marine use. This would be good advice for use at the beach even if you don’t take it in the water with you—it might collect sand that’s not easily shaken or blown off.

No one should expect to hear low bass from a tiny speaker with a specified frequency range of only 100Hz-20kHz, but the Clip 4 produced more bass than did the Clip 3. Other than that, its highs were smooth and crisp, and its midrange presented voices that were better focused and had more presence than through the Clip 3. It distorted only at its maximum volume setting, when I played a recording that had unusually low bass. It could play fairly loud, and loud enough for most activities. The sound varied with the speaker’s orientation: warmer when it lay flat on its back, less warm but more focused when hung aloft and facing me. 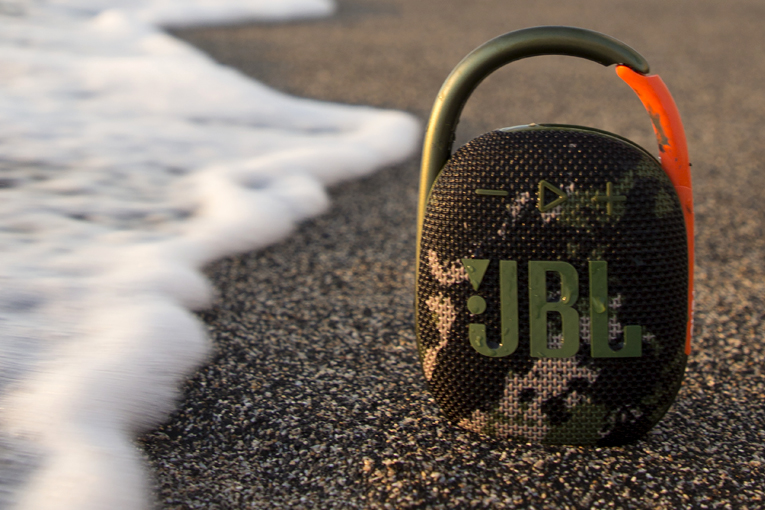 “Large Time,” from the Atlanta Rhythm Section’s Champagne Jam (16-bit/44.1kHz ALAC, Polydor), has good but not heavy bass, yet the Clip 4 faithfully reproduced its steady drumbeat. It also did well by the voices and sizzling electric guitar, as was to be expected from its midrange-centric sound. I found that I didn’t miss the bass too much, and that there was an advantage to this sort of sound: Since the Clip 4 had such good midrange and highs, I could hear more detail in the voices and upper instrumentals than usual.

Aaron Copland’s Fanfare for the Common Man opens with fortissimo timpani and bass drum joined by shimmering tam-tam. It has never sounded better than on a new recording by the BBC Philharmonic conducted by John Wilson (16/44.1 ALAC, Chandos). True, I had to imagine the sound of the bass drum—the Clip 4 simply couldn’t reproduce it—but the timpani strokes had presence and some oomph. The tam-tam was audible, and I actually felt its impact a bit. Needless to say, when the brass entered, it was nothing short of excellent. With this track, surprises and points for the Clip 4. 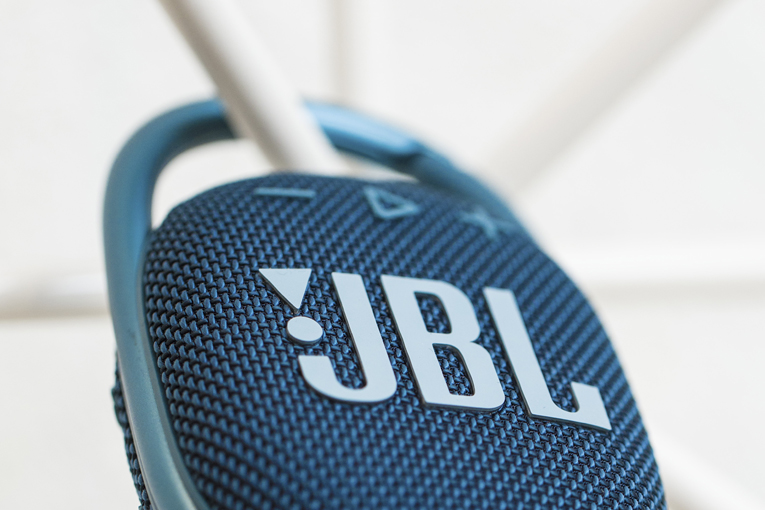 How about some quiet Spanish guitar by a dying campfire? I tried several such recordings, including Julian Bream’s Popular Classics for the Spanish Guitar (16/44.1 ALAC, RCA), and the results were splendid. As a classical guitar produces no low bass to speak of, the sound of this recording was authentic and accurate through the Clip 4. Presence was good, and detail abounded—this little speaker isn’t just for playing loud pop by the pool.

JBL’s Clip 4 fulfills its purpose as a clip-on-and-go, ultra-portable waterproof Bluetooth speaker. Though it features significant improvements over the Clip 3, buyers who want an auxiliary input jack might still prefer the older model. Though pricey at $69.95, the Clip 4 can be found for less online. Also worth considering is JBL’s Go 3. It costs only $39.95, also has a USB-C charging jack, and sounds almost identical. It has no carabiner, but has a sturdy lanyard. However, it can be used only in the upright position—JBL has put a steadying rubber pad on the bottom rather than on the back. Whatever you decide, the Clip 4 will give you good sound for its tiny size.