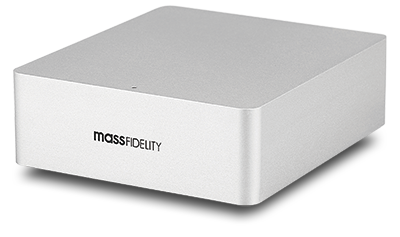 I hate wires! I hate buying them, I hate hooking them up, and I hate the restrictions they place on my audio system. No matter how neatly I try to organize and route them, most of the time they can’t be hidden. On the other hand, I understand a wire’s importance. Heck, I’ve spent thousands of dollars on cables because I wanted to improve the sound of my system.

Ever since my review of the Sonos Digital Music System, in 2007, I’ve known that wireless technology would one day replace some of these troubling wires. The convenience of the Sonos system was incredible to me. It gave me great flexibility of access to my music collection. The only problem was, it was very expensive, and it didn’t give me the sound quality I expected for all the money I spent.

In the six years since, audio has continued to embrace wireless technology, and one of the companies doing that while raising the level of sound quality per dollar spent is Mass Fidelity, founded in 2009 in Ontario, Canada. A “community of audiophiles, designers, and engineers who are united by their passion for music,” Mass Fidelity focuses its efforts on “intelligently facilitating the aggregation of all your digital music collections and sources, allowing you to engage your music in a friendly way across all the devices you use on a daily basis.” The subject of this review is their two-channel Relay Bluetooth receiver with built-in DAC ($249 USD), designed to work with any Bluetooth device that stores or streams music.

The Relay is a small, attractively designed component only 4”W x 1”H x 4.5”D and weighing 13.4 oz. The case is milled from a solid billet of aerospace-grade aluminum. The fit and finish, impressive for a product at this price, remind me of Apple products. The top and sides have a smooth finish, with only a small LED indicator on the top. On the rear panel are the Power button and several connections: a 5V DC 1A connector for the external power supply, a threaded connector for the antenna, and a pair of RCA jacks. Mass Fidelity provides one set of RCA-to-RCA interconnects and one stereo RCA-to-3.5mm interconnect. The Relay can connect to your audio system via its stereo analog outputs, but you can also set it to output an S/PDIF digital signal by holding down the Power button for five seconds. The LED changes from white to orange to tell you that you’re in digital mode. I tried the Relay’s digital output and it worked fine; my listening notes refer to its performance in analog mode, utilizing its built-in DAC.

Under the Relay’s hood is a surprise, and an important one if you’re using the analog outputs: a built-in, Burr-Brown 5102 DAC chip capable of decoding up to CD resolution (16-bit/44.1kHz). This chip has been out for years and has been used in many expensive DACs. Its characteristics, I’m told, are its high signal/noise ratio and its 24-bit digital-to-analog conversion. Mass Fidelity doesn’t stop there. Linear low-noise, low-dropout regulators and common-mode input-noise filtering on the power supply have been implemented to improve rejection of unwanted signal noise and interference from the outside world. Special grounding is also provided to optimize the digital and analog signals, as well as reject radio frequency interference (RFI). The Relay uses an aptX-enabled CSR module to connect to any device that uses Bluetooth streaming, such as a smartphone or computer. Bluetooth has a range of about 30’. Clearly, a lot of engineering has been built into this component. 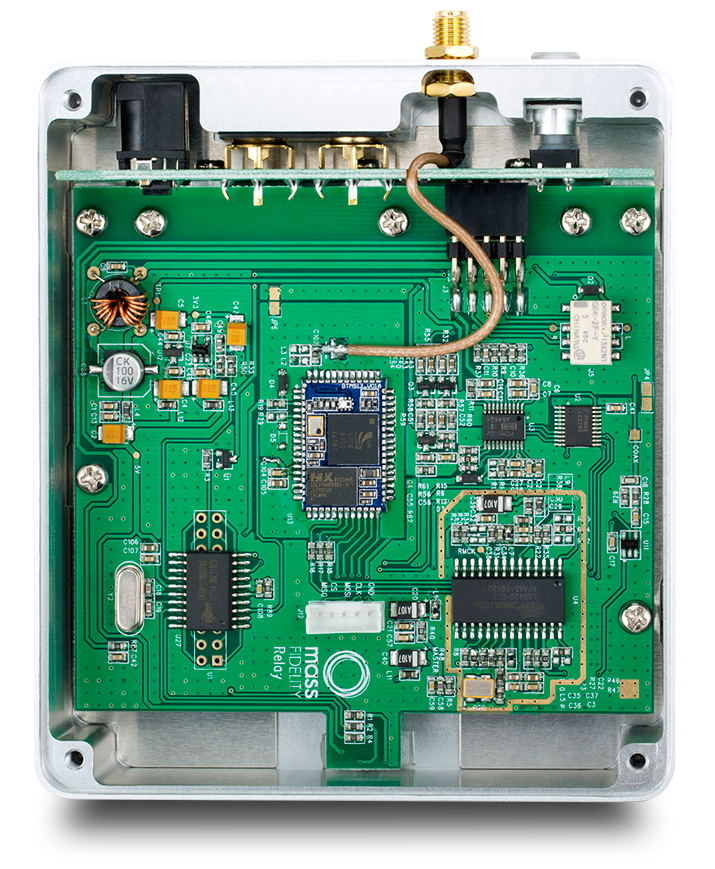 Setup was easy: I assembled the Relay by screwing in the supplied antenna, and connecting the supplied power cord and analog cables to my stereo. I pushed the Power button and the LED on top turned from red to white, indicating that the Relay was powered on. I brought up the settings menu of my Apple iPhone 5 and went to Bluetooth options. My phone then searched for Bluetooth devices in the area. The name “Relay” quickly popped up, and I selected it for pairing. They paired. It was that quick.

With a price of $249, the Relay is within almost every audiophile’s reach. For several reasons, I think it could also be a gateway product for the young music lover who hasn’t yet made the jump to audiophile sound. The first reason is ease of use, which the Relay displays in spades. A product that increases my use of my audio system is a product I will value. We spend so much time and money building these hi-fi systems we might as well get as much use out of them as we can. Most of us have owned an audio product that was difficult to live with, for one reason or another. I owned a preamp that didn’t allow me to fine-tune the volume. I loved the sound, but that wasn’t enough. The Relay doesn’t have this problem. The Relay also got me to listen more. Did the Relay sound better than the Weiss DAC I used to own? No, it didn't. But what I got with the Relay in my system that I don’t get with my standard hi-fi components was freedom. I freed myself from my confining listening position, and that was quite nice. I also found myself listening to music more. Also, streaming music from a smartphone is pretty cool! And its compact, sleek design allows the Relay to fit into just about any room. 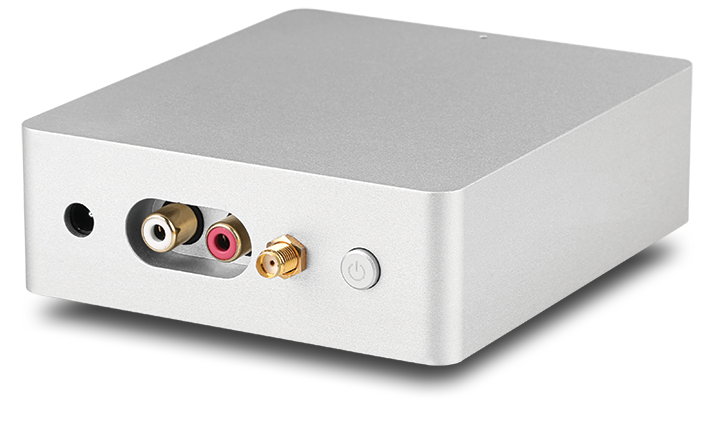 The first device I set up was my iPhone. From there, I opened the Spotify application that I’d downloaded from the Apple App Store, and began listening to music. For those who don’t know, Spotify is a music-streaming service much like Pandora. It’s easy to use: all you have to do is sign up for an account. As with Pandora, certain services are free; however, for a few bucks a month you get fewer ads and more features. This is where Spotify differentiates itself. For $10 a month, you can listen to just about every CD ever available. You can listen to full albums track by track, or fast-forward as much as you desire. In the settings, you have three choices of sound quality. I like the service so much that I deleted the stored music on my phone to make room for baby pictures. Another great reason to use Spotify is that it’s a great way to listen to music before you buy it.

Back to the Relay. I’ve recently discovered the music of Phoenix. I don’t own their newest album, Bankrupt (Atlantic) -- I first heard it from Spotify. I listened to it in my car and on my Sonos system in the bathroom, but this was the first time I’d heard it through my hi-fi rig. “The Real Thing” is a catchy tune that, normally, I wouldn’t use to comment on sound quality in a review. But not only was this pop song listenable through the Relay, it made me bob my head and simply enjoy the feeling that came over me. The driving beat sometimes overpowers the small speakers I have in my car, but now, with my two JL Audio Fathom f110 subwoofers laying the bass foundation in my room, the track’s power was fully realized. My Vivid Audio Oval V1.5 loudspeakers are of extremely high resolution, and the Relay’s Burr-Brown DAC made the 320kbps MP3 of “The Real Thing” sound clear and energetic, if not as nuanced as most audiophile recordings. Without the Relay’s ability to present a credible sonic picture, though, I wouldn’t be able to enjoy it in my system; this capability meant I was able to enjoy the song on another level than what I’m used to in the car or through the Sonos system. 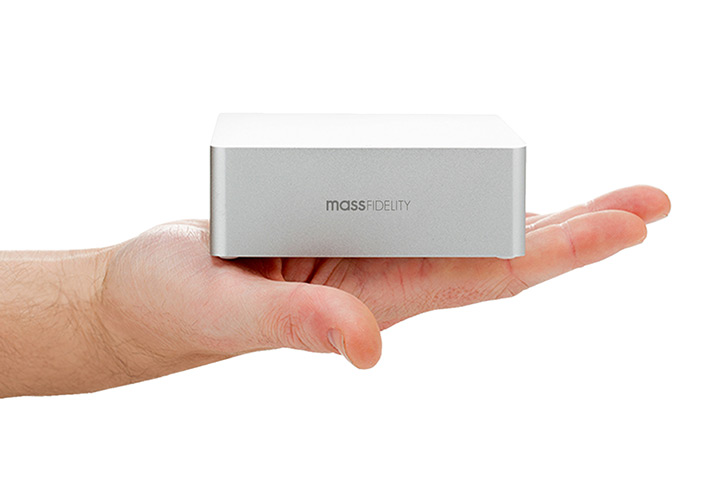 One of Mass Fidelity’s requests was that I do an A/B comparison of the Relay and my Oppo BDP-93 universal Blu-ray player ($499.99 when available). The Oppo would play the CD, and the Relay would receive the track wirelessly from my iPhone 5. In order for me to properly do this comparison, I matched the output levels of the two sources -- most listeners will think the louder of two test samples sounds “better.” I used my trusty RadioShack SPL meter to accomplish this, playing pink noise through both the Oppo and the Mass and adjusting them accordingly. Next, I loaded a couple of tracks from Neil Young’s Live at Massey Hall 1971 (CD, Reprise WEA 43328 and 16/44.1 WAV) onto my iPhone 5, to ensure that both versions of both tracks were from exactly the same original source. The goal of this test was twofold. First, I wanted to confirm that the Bluetooth connection equaled the wired connection of the Oppo player from a functional standpoint; e.g., no dropouts. Second, I wanted to see if the Relay’s Burr-Brown DAC sounded as good as the more expensive Oppo.

I’ve used Young’s Massey Hall in many of the reviews I’ve written over the last few years. The recording has great clarity, with tons of ambient cues that are clearly revealed through a high-resolution audio system. As I played “Helpless” through each source in turn, I couldn’t consistently detect a difference. Next, I synced the two tracks simultaneously on each source and asked my wife to switch between the two as I listened. As carefully as I listened, the timbres of the guitar strings, the tone of Young’s voice, and all of the ambient information sounded exactly the same. The sound qualities of the two sources were indistinguishable. The Bluetooth connection did not affect the sound in the least -- and there were no dropouts.

But I didn’t need the A/B comparison of the Mass Fidelity and the Oppo to validate my assessment of the Relay. As I said before, some audio products provide something more than just great sound quality, and Mass Fidelity’s Relay did that. The Relay is as nicely engineered and built as any audio product at its price that I have reviewed. The thought that Mass Fidelity has put into it is refreshing. There are other Bluetooth DACs on the market that come nowhere close to looking or sounding as good as the Relay. On top of that, the Relay is really easy to use. What more can I say -- other than that the Relay caused me to use my audio system more? What a great compliment to pay any product, regardless of price.