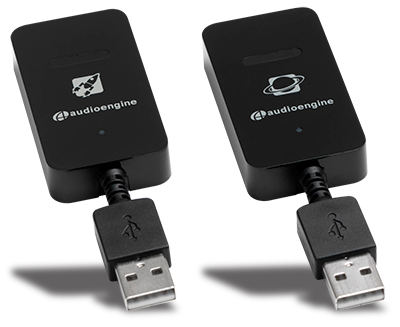 Audioengine began as a manufacturer of professional and consumer electronic products for other companies. Eventually they decided to put out audio components under their own name, and in 2005 the company officially introduced their first consumer loudspeaker, the powered Audioengine 5, which was highly regarded and is still available as the 5+. The company’s website currently lists ten consumer-audio products, including desktop and bookshelf loudspeakers, a desktop amplifier, high-performance wired and wireless 24-bit DACs, a powered subwoofer, and the subject of this review, the 16-bit W3 wireless digital-to-analog converter ($149 USD).

The W3 consists of two modules, labeled Sender and Receiver, that look like USB memory sticks. The Sender is a 16-bit USB-powered component with wireless output. It transmits only a bit depth of 16 bits, at a sample rate of 44.1 or 48kHz, but most music-player apps will downconvert 24-bit files or 88kHz and higher sample rates to match the W3’s 16/48 maximum. The Sender is plugged into a computer’s USB port, from which it draws its power via a stubby USB cable maybe half an inch long. A white LED illuminates to indicate that the Sender is receiving power.

The W3 Receiver contains the DAC and looks identical to the Sender. It’s a little confusing to see the Receiver’s USB plug, because it seems to indicate that music will be delivered to that connector, but that’s not the case. The Receiver’s USB connector plugs into an active USB port only for power -- it outputs analog stereo via a stereo mini-jack. Audioengine supplies some generic cables with stereo mini-jacks and RCA plugs, should you want to connect the Receiver to an AVR or surround processor. And if you need to use the Receiver somewhere that lacks a USB port (as I did), Audioengine provides a USB power adapter. You could even use the output of a W3 Receiver to directly drive powered speakers such as Audioengine’s 5+, with no AVR or other electronic component between them.

Installation was totally painless. Plug the Sender into your computer and it installs the drivers automatically in no more than a few minutes. I opened JRiver Media Center multimedia player, found an album I hadn’t heard in a while, went to the Options menu, selected the Audioengine W3 as the playback device, clicked Play, and immediately had music through a Speakercraft CS3 soundbar in the family room. Audioengine had provided a second Receiver, which I connected to an AVR that I use to drive outdoor speakers. The soundbar and the outdoor system played the same music simultaneously. The W3 ships with one Receiver, but you can add up to two more at $89 each, for a total of three Receivers, all of which can be driven at the same time. There’s no on/off selector or any way to control which Receiver(s) is active; if it’s connected to a USB port, it’s active. Of course, deselecting their input on your AVR or soundbar or surround processor effectively disables that Receiver, though the W3 Receiver will still be receiving the signal from the Sender. 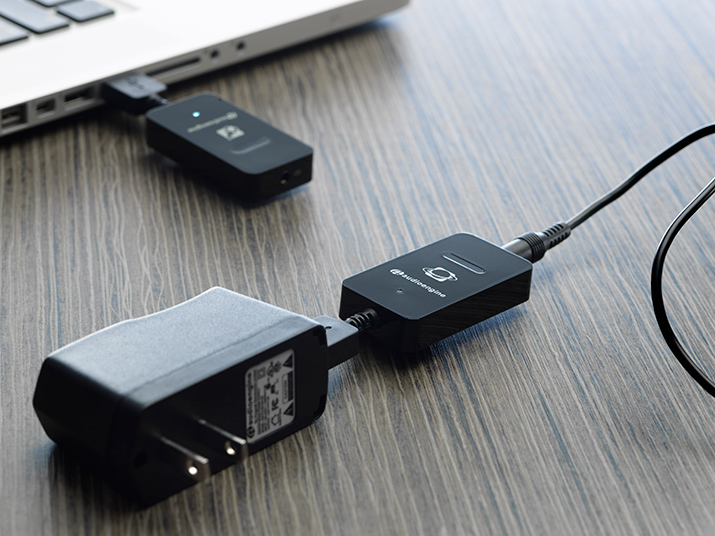 The W3’s sound wasn’t “high end,” but it was knocking on the door. AudioQuest’s DragonFly USB DAC ($250) sounds considerably better -- but it’s not wireless. The DragonFly is one of the biggest bargains in high-end audio -- it’s not surprising that a wired USB DAC would sound better than one costing not much more than half its price. What was surprising was that the W3 sounded as good as it did, especially considering that you’re getting a Sender and a Receiver for the price. I wouldn’t use the W3 if I wanted the highest possible wireless audio quality. For that, Audioengine’s own D2, a 24-bit wireless DAC ($599), would be a good choice (though its maximum output resolution is 24/96), or even their D1 wired DAC ($169), which operates all the way up to 24/192. The W3 is perfect for noncritical listening applications in which you just want better-than-MP3 sound quality and you need to get it there without wires, and without spending an arm and a leg.

My outdoor speaker setup and family-room TV soundbar are perfect examples. My wife likes having music on for cleaning, cooking, or dinner, especially if we have guests, whether inside or on the patio. The W3 was great for those applications, and produced sound quality that fully met my expectations. It was a lot like playing a CD in a good mid-priced CD, DVD, or Blu-ray player -- the sound was good enough to reveal the differences between Audioengine’s supplied generic stereo RCA/mini-jack cables and AudioQuest’s excellent if expensive Yosemite DBS interconnect ($595/1m). The W3 also revealed differences between different masterings of the same recording, even through the soundbar and outdoor speakers. For example, the 2009 remasterings of the Beatles’ albums sounded more detailed, with better high frequencies and more natural balance, than the 1987 versions, with their shrillness and less open sound.

There was a good sense of air and space when those were present on the recordings. There was no flattening of perspective or dulling of the sound, as you hear from MP3s when you compare them to original CD-resolution versions of the same tracks. In fact, the W3 sounded exactly like the CD played over the same electronics and loudspeakers . . . up to a point. CD-resolution tracks played on my reference system -- circa $4000 for a modified Mac Mini, Wavelength Proton USB DAC, AudioQuest Diamond and Yosemite DBS cables, AudioQuest power cord, Mac Platform, extensive power conditioning, etc. -- still sounded more resolved and “pretty.” But the intended users of the modestly priced W3 are unlikely to use it with $5000/pair loudspeakers and $4000 worth of electronics. So as far as I’m concerned, the W3 hits the target for price/performance. Its sound won’t be mistaken for that of a high-end system, but then you don’t have to spend high-end bucks for it. That the W3 didn’t dumb down the sound is pretty admirable for $149.

Before the W3 came along, my wife would generally settle for one of the music channels provided by our TV service provider. But after hearing the W3 in action, she never again listened to those low-quality, highly compressed feeds. Nor did she listen anymore to radio stations streamed via the Internet, whose sound quality tends to be similarly compromised by compression. A big portion of the W3’s sonic advantage came from the fact that it was playing lossless music files from my Windows 7 laptop or from a Mac Mini running OS 10.6.8. Obviously, if you’re really unconcerned about sound quality, you could listen to your MP3s or iTunes library via the W3. That worked fine, but CD-quality files sounded better, and the W3 was good enough to reveal the improvement.

I didn’t perform any specific stress tests on the system, such as moving the Sender farther and farther from the Receiver. Audioengine’s specs indicate an operating range of more than 100’; the farthest apart I put a Receiver and Sender was about 50’, and I had no problems. The pairing worked fine from anywhere in our 2400-sq.-ft., two-story house, and in our temporary apartment while we hunted for a new house. Even in the apartment building, surrounded by many wireless Internet networks, cell phones, Bluetooth devices, cordless phones, and who knows what else, I never had any interference problems. The only problem I ran into was when I played high-resolution with sample rates of 88kHz or higher, which produced brief glitches in the sound. But I blame that on the music-playback software on my Windows 7 laptop; it didn’t happen when I played the same files on the Mac using different software.

Since moving from Colorado Springs to a suburb 25 miles east of San Francisco, we’ve been spending more time outside. Recently, I’d moved things around a bit in the house and re-set-up just about everything that had to do with audio and video. I cued up some music, and we were enjoying wine and cheese on the patio, when we ran out of music. With the Mac way on the other side of the house, I decided I’d get the iPad and use the Splashtop Remote app to directly access the Mac. (There’s a version of Splashtop for PCs that works fine and lets you use an iPad as if it were a PC, albeit with gestures replacing mouse functions.) It was quite a revelation to be sitting there listening to CD-quality music through our pair of small Clements bookshelf speakers driven by a six-year-old Pioneer AVR that would otherwise be packed away in a closet somewhere. To think that wireless communications were flying back and forth from us to the other side of the house, to both select the music and send it to our patio haven, was one of those “ain’t tech great” moments. The wireless iPad app costs a few bucks, the Mac and PC versions are free, and Audioengine’s W3 is only $149 -- great tech at very modest cost is even better.

Honest-to-goodness, CD-quality, wireless sound for $149. No interference problems, even in the dense RFI soup of a large apartment complex. Ultrasimple setup -- just plug in the W3 Sender and Receiver and you’re ready to move your music anywhere you need it within a reasonable range. In fact, you can send your music to up to three W3 Receivers simultaneously. Simple, inexpensive, functional -- both thumbs way up. Nice job, Audioengine.